Catherine Gentile is the author of the new novel Sunday's Orphan. Her other books include the novel The Quiet Roar of a Hummingbird, and her work has appeared in a variety of publications, including Writers' Market and North Dakota Quarterly. She lives in Maine.

Q: What inspired you to write Sunday's Orphan, and how did you create your character Promise?

A: In 2003, when I first vacationed in Georgia, I found its climate, natural beauty, and friendliness of its citizens engaging.

During one of these visits, while walking the beach, I stopped to watch an African-American man build an enormous, intricate sand castle. White vacationers had gathered around and were taking photos of him and his creation.

I was taken in as well, intrigued by what it must have felt like for him to be surrounded by these White people, admiring his skill.

About the same time, Emmett Till’s brutal murder and newspaper reports of Senator Strom Thurmond having fathered a racially mixed daughter rekindled my interest in the role race has played within our human history. I started the first draft a novel set on remnants of a plantation on the barrier islands off the coast of Georgia.

Promise’s character emerged as I imagined her in conversation with her demanding adoptive uncle, Reverend Taylor Crawford. Their interactions revealed that Taylor had tutored Promise in tandem with his brilliant foreman.

Promise’s voice had a complexity to it; her presentation a thoughtful steadiness that never faltered. Nonplussed by the having to compete with the foreman, Promise showed herself a keen observer of men and the natural world, and a horsewoman who healed wounded creatures, but had yet to heal her own wounds.

At this point, Promise landed the role of protagonist for Sunday’s Orphan.

Q: As you mentioned, the novel takes place on the barrier islands off the coast of Georgia. How important is setting to you in your writing?

A: In Sunday’s Orphan, setting serves as another character, one that has tremendous influence over the lives within its reach.

When I consider the people I’ve encountered from different parts of the United States and abroad--a city dweller vs. those live off the grid—I’m struck by the ways in which their environments have affected their lives. This environment or, in the case of this novel, the setting, has a profound impact on the person and vice versa. 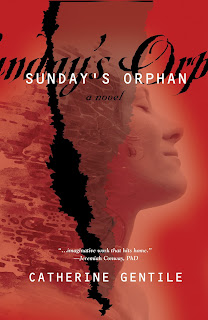 When writing Sunday’s Orphan, I delved into the setting, the backdrop of the story, in hopes of understanding what it offered and demanded of my characters.

The ways in which characters interact with the elements within the setting—suffocating heat, ominous clouds—reveals vibrant details about the character being portrayed and the era within which that character dwells.

Protagonist Promise Crawford inherits a former slave plantation with its marshes, depleted soil, and heat, to find its isolation protected her from Jim Crow activity.

The setting quickly merges with local farming customs, politics, and prejudices. Weighted by the plantation’s history of slavery and a bold attempt to introduce its inhabitants to justice and peace, the setting is as intense as Promise’s reactions to it.

A: A ton of research went into Sunday's Orphan, and that research was my joy. I discovered how absorbing research is for me, and how much it informed my work.

I also discovered that all I needed to say when approaching shopkeepers, citizens, and librarians was, “I'm writing a novel...” and people were more than happy to sit down and share their experiences and resources.

I’m a master gardener emerita who raises herbs, perennials, and vegetables on veins of sand and clay, so learning about farming practices on a tired plantation with poor soil quality fascinated me.

I’d never spent much time thinking about funeral and burial customs, and what family members would resort to should they be uncertain that their unconscious loved was, in fact, dead.

Some left the lids on the homemade coffins slightly ajar, so if the person regained consciousness, he could call for help; others insured the person was gone by performing the grisly deed of slitting their wrists.

Birthing customs in rural areas where hospitals were unavailable fascinated me as did the woman who took on the role of midwife who put pain-quelling herbs and teas to use. Also, attitudes toward managing pain—the birth mother was in charge of her pain, not the other way around—differed from the way we think about pain today.

A: I hope readers will think about ways in which the characters in Sunday’s Orphan demonstrate that: a) The human ego has the potential for tremendous good, as long as its tendency to devolve into its polar opposite is reined in and b) when love intercedes with a merciful act, it renders the unsavory aspects of ego impotent.

A: I currently edit and publish a monthly ezine entitled Together With Alzheimer's, which has subscribers throughout the United States.

I have three additional writing projects in the works: two are nonfiction, and the other, my next novel, set in 14th-century Europe, is in its formative stage. I invite readers to visit my website for blog updates, and to learn more about Sunday's Orphan: http://www.catherinegentile.com.

A: As a master gardener emerita and amateur photographer, I design and photograph gardens. Yoga, biking, and cross-country skiing add variety to my daily exercise routine.

I favor organic foods, live what is known as a “ketogenic lifestyle,”  and often experiment with new recipes. These interests and hobbies feed my creative juices, and inspire my writing.