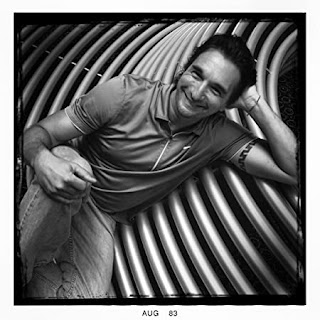 Nicholas Garnett is the author of the new memoir In the Pink. A freelance editor, he is also the co-producer of the storytelling series Lip Service, and his work has appeared in a variety of publications, including Salon and The Florida Book Review.

Q: What inspired you to write this memoir, and over how long a period did you write it?

A: The short answer is that the inspiration for my memoir, In the Pink, came pretty easily. Its publication did not.

The much longer answer is: As the only straight, married guy thoroughly immersed in the gay circuit-party scene of the ‘90s (if there were others, I never met them), it occurred to me that I had a unique story to tell.

By the time my marriage had ended in divorce, and I had relocated from Washington, D.C., to Miami Beach in 2004 to start a new life, I had written a few chapters of what I imagined would be a scandalous, behind-the-scenes view of a decadent lifestyle.

I began to take writing workshops, and the more I took, the more I wrote: scene after scene—vivid and compelling—according to the feedback I was getting.

In 2006, I spent the summer in Provincetown, Massachusetts, a long-time mecca for artists and writers. The apartment just above mine happened to be rented by a prominent writer who had just published his memoir. One day, I finally got up the nerve to ask him if he would take a look at what I’d written.

I spent much of the next couple of days in anticipatory agony, peering through my venetian blinds as he paced back and forth along the walkway that ran outside our units reading my story, the manuscript in one hand, a cigarette in the other. Finally, he invited me up to his place. He handed me a cocktail, lit up a joint and handed me that, too.

He said, “I’ve got some good news, and some bad news.” He didn’t ask me which I wanted to hear first. “Good news is,” he said, “you can write.” He motioned for me to hand him the joint. I did, and he took a toke, as if to prepare himself for what was coming next. “But you’re not a writer.” Ouch.

He went on to explain that while I obviously had a knack for description and rendering scenes, he felt detached from the story because he didn’t have a sense of who was writing it, or why. “A reporter can get away with just the facts,” he said, “a writer can’t.” I was going to have to figure out a way to insert my myself into the story, he said. And to do that, I would have to figure out what it meant to me.

I hated that advice. Following it would mean doing what didn’t come naturally to me: introspection. And it would also take what I didn’t want to give: time. Time to be able to look back at what happened, to put it in some context. That process took me years and an M.F.A. degree in Creative Writing (the memoir was my thesis) to accomplish.

Gradually, I began to see that, while the decadent behavior and outrageous events depicted in my memoir were unusual, the story was universal: one guy’s search to find his place in the world. Once I figured that out, things began to make sense and the story began to take shape. I cut thousands of words and dozens of scenes—some of them pretty damn good—that were repetitive or irrelevant, or both.

By 2011, I had finished my M.F.A. and produced a story that proved, at least to myself, that I had progressed beyond someone who could write. I had become a writer.

A literary agent agreed with me. She shopped the story to several editors and here’s what happened next. Nothing. Universal theme notwithstanding, no publisher was ready to take on a story about a straight guy’s immersion into gay party culture. As the years and the rejections piled up, I began to give up.

The only shred of hope I clung to was that the digital version of my memoir, which had been posted by the university in an on-line repository along with all sorts of other master and doctoral theses, was kind of a hit. Each month, I’d receive a report telling me that 15 or 20 (on a good month, 30 or 40) copies of my thesis had been downloaded. I wasn’t told who had requested it or why, but I was told where. And “where” included some places I would never have expected.

In December of 2020, the monthly report showed that I had accumulated over 3,000 downloads. After 10 years of trying without success to get the story published, and with no prospects on the horizon, I threw in the towel.

On December 11, 2020, here’s what I posted to Facebook: “Looks like I created a whole new literary category: international non seller. I've decided to go all in. If you're looking to curl up with a good book over the holidays, join readers from all over the world and download mine. What the hell--it's free. And if you like anything about it (I mean anything: the formatting, the font) please let me know. I could use a little encouragement right about now.”

A few days later, a professor in my M.F.A. program who had seen my post asked to take a look at the manuscript. He had someone he wanted to run it by. That “someone” was a publisher. Fifteen years after I started writing it, 10 years after I thought I’d finished it, and a few weeks after I’d given up on it, I received an offer to publish In the Pink.

What’s the message here? I have no idea. The odd chain of events that resulted in the publication of my memoir could have just as easily happened five years ago. Or never. All I can say is that I’m sure it would never have happened at all but for the guidance I got that afternoon in Provincetown back in 2006. Sometimes, the best advice is precisely the kind you don’t want to receive.

Q: The author Les Standiford wrote of the book, “By turns outrageous, hilarious, and truly moving, this unflinching chronicle of a profoundly mismatched straight couple's foray into the gay party and power circuit sets a new standard for the tale of wretched excess, and provides much-needed perspective along the way.” What do you think of that description?

A: Masterful! Besides, who am I to take issue with Les Standiford? I mean, he’s the founding director of the MFA program at Florida International University and has published something like 25 books. A version of In the Pink was my MFA thesis and he was my thesis advisor, so—with the possible exception of me—he knows this story better than anyone.

And more than anybody else—with the possible exception of me—he was surprised and disappointed that the story wasn’t published earlier.  For years, he kept paving the way, connecting me with various agents and editors. As the rejections kept piling up, I started to lose hope, but he never did. I can’t properly express my gratitude to him. Or maybe I just did.

Q: How would you describe your marriage to Rachael?

A: I spent a whole book trying to do just that! In the memoir, I describe how I felt the morning after Rachael and I first hooked up: “I’d figured last night for a drunken, coked-out one-night stand between a couple of bored, lonely people looking for something they didn’t know they never had. I was wrong about the one-night stand.”

Like all relationships, even the failed ones, there were positive elements: I walked her back and she pressed me forward. We were married for 10 years, and I’d say the first five were good. But the lifestyle depicted in In the Pink wasn’t sustainable. We had to move on. The problem was we couldn’t answer the question move on to what? When we couldn’t see ahead, we turned on each other.

The thing I wish I could go back and change is the way I parted ways with Rachael. Not the fact that I did it—but how. Instead of facing up to her, I did the one thing I knew she couldn’t forgive: betray her. That was a cowardly act, one I will always regret.

We’re not in touch and haven’t been for many years. My time with her feels like a lifetime ago, and I suppose it was. I’m happily remarried and feel so lucky to have the life I have now. The things I was looking for, I found. I hope Rachael did, too.

A: Not another memoir! I think I’ve said everything I have to say about myself. After I had all but given up on In the Pink ever being published, I moved on and wrote a literary thriller set in Miami Beach.

I was in the process of shopping that story around to agents and editors when, unexpectedly, In the Pink was accepted for publication. I had to drop everything and devote all my free time and attention to promoting it.

I’m hoping that In the Pink will help me find a home for that novel. One way or the other, I’ll go back to anther I story I had started that could lead to another book-length project.

A: Yes. Wait—you mean about me? Nah. But if you think of something, just ask. I’m an open book.