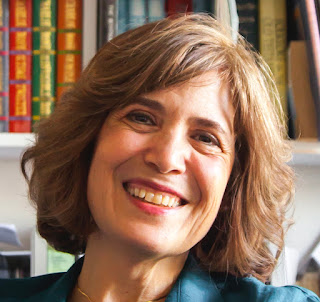 Nancy Churnin is the author of two new children's picture books, A Queen to the Rescue: The Story of Henrietta Szold, Founder of Hadassah, and Dear Mr. Dickens. Her many other books include Martin & Anne. She lives in North Texas.

Q: Your new picture book A Queen to the Rescue focuses on the life of Henrietta Szold, the founder of the Jewish women's organization Hadassah. Why did you decide to write about her, and did you learn anything surprising in your research?

A: I am a lifetime member of Hadassah, along with my sister, but for a long time I didn’t know who founded this great Jewish women’s charity and why.

When I dug into its origins and learned about Henrietta Szold, I was amazed and inspired by her courage and passion to heal the world – to make things better for people whenever and wherever she could.

Her one sadness was that she never married or had children, but I was moved by how the 11,000 children she saved from the Holocaust viewed her as a mother and how she is honored to this day as the Mother of Israel.

I applied to the TENT program, offered by PJ Library at the Yiddish Book Center in Amherst, where children’s book creators would have an opportunity to work on books of interest to Jewish children.

Q: The book ties Szold to the Jewish holiday of Purim. What connections did you make between the two?

A: One of the most challenging aspects of writing this book was finding a kid-friendly way to tell the story of a woman who had done so much for others over so many years, but never liked to draw too much attention to herself.

When I discovered how much Henrietta admired Queen Esther, the heroine of the Purim story, that helped me thread through the amazing things she accomplished in an approachable way.

To save her people, Queen Esther spoke up to a mighty and fearful king – her husband, who had killed his first wife for challenging him.

To save children from the Holocaust, Henrietta took a boat to the heart of Nazi Germany to plead with powerful men for visas for the children’s passage. She succeeded in rescuing 11,000 children with the help of the women of Hadassah, who raised the money to pay for the children’s travel, education, housing and food.

Henrietta founded Hadassah on Purim and the very name of her charity – Hadassah – is the Hebrew name for Esther. I also discovered through my research that a prized possession she brought back to America from her first visit to what was then Palestine was a Purim scroll. 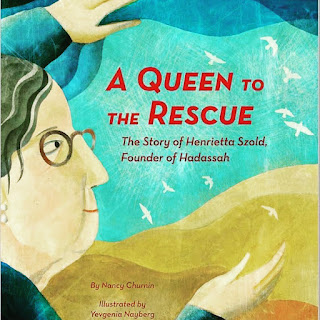 Kids enjoy Purim as a fun holiday, where we dress up as Queen Esther, the mighty king, and the wicked Haman, eat hamantashen cookies, and shake noisemakers that we call groggers. But it’s good to remember why we are celebrating – because Queen Esther had the courage to risk her life to save others.

The other thing I love about Henrietta and that makes her story universal is that she stood up to powerful figures to save her people, but also all people.

Q: You also have another new picture book, Dear Mr. Dickens. How did you learn about Eliza Davis and her correspondence with Charles Dickens about antisemitism?

A: I have always been a big fan of Charles Dickens and how his compassion for children led England to change child labor laws. But I never understood and was always hurt by his creation of Fagin in Oliver Twist as an ugly Jewish character.

I always wished I could go back in time and ask him why a writer who was so charitable and caring for everyone else had no feelings for Jewish people who were so oppressed especially in England at the time when he wrote that book.

I discovered the Eliza Davis letters by accident when I drifted to reading articles about Charles Dickens in the library, when I’d really intended to be researching another topic.

I couldn’t believe that the letter I wished I could have written had actually been written to him – by Eliza Davis. Not only that, her letter changed his heart – just as I dreamed a letter of mine might have done – and she was the reason he became an advocate for the Jewish people and created the kindly Mr. Riah in Our Mutual Friend.

Once I found that, I was determined to tell their story. I started on a detective trip that led me to three Dickens scholars, the full set of letters, and a journey that healed a part of my heart I hadn’t even realized had been so deeply wounded as a child.

For now I knew that the writer I had admired so much did ultimately have compassion for Jewish people. And I learned that while people will make mistakes that injure others, the truly noble ones like Charles Dickens will atone. And once they atone the most noble thing that you can do is what Eliza Davis did – forgive. 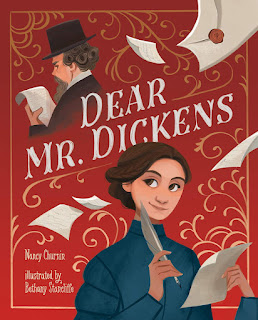 What Dear Mr. Dickens is truly about is the power of speaking up when you see someone doing wrong, giving that person an opportunity to make amends, and forgiving with a full heart when they do.

Q: What do you think the illustrations, by Yevgenia Nayberg and Bethany Stancliffe respectively, add to the books?

A: I am so honored to work with these brilliant illustrators!

Of the 10 books that I have had published so far, Yevgenia Nayberg, who also illustrated Martin & Anne, the Kindred Spirits of Dr. Martin Luther King, Jr. and Anne Frank, is the only illustrator I have had the privilege to work with twice.

In both books, she has shown herself to be a master of expressing difficult emotions in a way that is true to the moment without overwhelming young children.

That can be particularly tricky when dealing with scary times like the Holocaust. At times like these Yevgenia says so much with her use of color and lighting and how people hold themselves, even when their faces are turned away from the reader.

In A Queen to the Rescue, her use of birds is also telling – dark birds that underline worry, later replaced by white doves of peace at more hopeful times.

In Dear Mr. Dickens, Bethany Stancliffe has absolutely delighted me, the Dickens scholars who vetted the book, and my friends at The Charles Dickens Museum, who found the illustrations a perfect match for the story.

Like Yevgenia, Bethany says so much with the expressions of the characters and how they hold themselves. Different times and subject matter call for a different look, however, and Bethany’s bright palette and softer style evoke Victorian sensibilities so exquisitely, you feel you’re stepping into that world -- that time and place.

A: I have a book that is in contract negotiations and another that is getting close. In the meantime, I continue to work on manuscripts that are close to my heart. I look forward to sharing more after deals are finalized.

A: All my books come with free teacher guides, resources, and dedicated project pages on my website at nancychurnin.com. The project for Dear Mr. Dickens is DEAR… I hope, with teacher and parent permission, to share photos of letters kids write to people in positions of influence asking them to right wrongs or to take action in some way to make things better for all.

The project for A Queen to the Rescue is HEAL THE WORLD. I hope, with teacher and parent permission, to share photos of good deeds and kindnesses kids have done because every time we do something kind, we help heal the world. I love to do presentations and I hope everyone interested will check out my page on that on my website, too.

Thank you so much, Deborah, for this opportunity to share my journey with Dear Mr. Dickens and A Queen to the Rescue, and for all you do for the kidlit community as an advocate and as an author! I appreciate the light and hope you bring to the world.