Tori Whitaker is the author of the new novel Millicent Glenn's Last Wish. She lives near Atlanta, Georgia.

Q: You note that the inspiration for Millicent Glenn's Last Wish came from a family secret. How did learning about that secret eventually lead to your creation of Millie?

A: When I was around 5 years old, I was at a big family reunion and overheard some older, distant cousins allude to the tragedy that I’ve fictionalized here. Though no one else spoke of it, that mental vision of what happened stayed with me.

Years after the woman who was involved had already passed, I asked three people close to her if she’d ever discussed it. They each said they’d had but one conversation in all the time they’d known her—and they each had a different detail to share. I took those few details and built a whole story around them.

Q: The novel takes place in Cincinnati--how important is setting to you in your work? 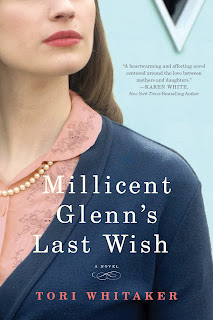 A: One of my writing instructors, author Joshilyn Jackson, once said that a story’s sense of place can be enhanced if you have “a visceral connection to the place.” I lived in Cincinnati until I was 10.

Indeed, I loved how little memories floated up as I wrote—my dad taking us to do the whispering fountains at Union Terminal, my grandmother and I eating ice cream at Graeter’s—descriptions that worked their ways into my story.

Cincinnati became important to Millie’s particular era as well. Her impoverished youth, for example, had resulted from the devastating effect Prohibition had on her German family who had worked for generations in the city’s beer brewing industry.

Q: You tell the story alternating between two time periods: the post-World War II era and the recent past. Did you write the novel in the order in which it appears, or did you focus more on one time period before turning to the other?

A: Crafting dual timelines can be a challenge. I start with a rough outline of the whole story and then I draft a few chapters in the modern timeline, followed by a few in the historical period. Then I weave them into the proper order and move on. I keep going back and forth all the way through the book like that.

The outline gets adjusted a lot as the characters and story take on lives of their own and I have to revise accordingly. But when I think the book is pretty much there, I separate out all of the modern chapters and read them through alone—and I do that for the other timeline, too. Each storyline’s arc needs to stand on its own in addition to the arc of the overall novel.

Q: What role do you think secrecy plays in the novel, and for your three main characters?

A: Millie harbors the secret of a tragedy from the 1950s that she believes is partly her fault. For her to finally confess to her family what happened is huge. It could bond them closer or tear them further apart. Yet, it turns out her daughter has withheld something important from her own daughter as well.

Millie wrestles with whether she had set this all in motion—this friction, this act of secrets being handed down from mother to daughter. But will characters ultimately be glad they’ve learned the truth? Or will they wish they’d never asked? These are questions readers might ponder about situations in their own lives.

A: I’m writing another dual timeline novel, a family drama that shifts between modern day and the jazz age. It’s not set in Cincinnati, and there are different main characters in each period. That’s all I can say for now!

A: My book is about three generations of women—five actually, if one counts Millie’s late mother and her granddaughter’s baby on the way. When I was born, I became my family’s fifth living generation. When my grandchildren came along, we had five living generations again.

I’ve learned this is very rare. Perhaps the experience has given me a sense of what we observe in those who’ve come before us, and what we pass down from one generation to the next—and this theme informs my writing.