Rita Dragonette is the author of the novel The Fourteenth of September. A former public relations executive, she lives in Chicago.

Q: How did you come up with the idea for The Fourteenth of September, and for your character Judy?

A: The story is based on my personal experiences on campus during the most tumultuous time of the Vietnam War and the height of the protest against it—1969-70. I had long wanted to write a story about that era, which hasn’t been given enough attention and, in particular, to tell it from a woman’s point of view.

I also wanted to address my interest in the subject of women and war (my mother was a World War II vet who spent three years overseas during that conflict) and the marginalization of women’s experiences in war.

With The Fourteenth of September I gave my main character, Judy, a dilemma with the same emotional gravitas as the one faced by any man of the time— if drafted would he go to Vietnam or Canada?

Judy’s decision is equally fraught—she’s in college on a military scholarship but joins the anti-war movement, risking both future and family, and has to make a life-altering decision. They are similar coming of conscience questions.

My intention was to eliminate the gender issue and even the stakes. When there is a war we are all in it—experiences may differ but they are of equal value. The argument applies across the spectrum of feminist issues.

I knew Judy well and wanted to tell the story of those times (so similar to today’s unrest) through the eyes of a young woman on the brink of adulthood, who open-heartedly believes the world can be changed. 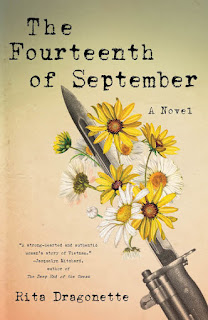 A: Because I’d lived through the era, I didn’t need to research from the ground up. I knew the language, the clothing, the setting and, I thought, all the dates.

However, I was surprised during fact-checking to discover, for example, that the first Lottery drawing was held the Monday we all returned to campus after the Thanksgiving holiday, which is particularly cruel, if you think about it. I was able to use that emotion in the story.

Research also heavily influenced my timeline.  I was determined to keep my story to a single school year, September—May, to coincide with the time frame that I felt defined the character of the generation dramatized in the novel—from the first draft lottery through Kent State.

But I found there wouldn’t have been time for any characters with a low lottery number to actually go to Vietnam before the end of the story. I had to change the narrative arc of several to accommodate the reality of what could or couldn’t have happened. Historical fiction has guidelines—everything in it either needs to have happened or could have happened.

A: Issues of history and privilege make comparisons complicated, but in general if people hit the streets it’s because they feel they’ve tried all the regular channels, haven’t been listened to, and feel powerless.

During the ‘69-‘70 time frame of the novel, the world was equally split, particularly between those who felt America could never lose a war and those who more realistically felt we needed to cut our losses and get out of Vietnam. Men too young to vote were being sent to die and no one was listening—hitting the streets seemed the only way to get attention.

I was actually out in the first night of the street action in Chicago after the George Floyd murder and it felt so much like what happened after Kent State, which is depicted in detail in The Fourteenth of September, and I found the similarities to be startling.

People expressing their right to free speech were murdered on television. Universities across the country were ablaze in rage and solidarity. There were factions for destruction as well as for calm. The National Guard was involved. There were arrests. It took time to recapture the message. Kent State ended up being very important, a turning point in support for the war.

The current issues of police brutality and racial inequality have been longer in making and will take longer to address, but the impetus and reaction are alarmingly similar. I call it the “hamster wheel of history.” We need to learn from our historical experience how not to let things get to this point again and again.

Stories like The Fourteenth of September are instructive, cautionary, and vital. The stories out of today’s protests will be the same.

A: My belief is that we learn our history through facts and nonfiction, but we understand it through narrative. I would like every reader to experience the six months depicted in the novel in Judy’s shoes and wonder what they would have done in the same circumstances.

And, if possible, share it with family members and start a dialogue about how those times impacted their own families—it’s only been 50 years. People have stories to tell, probably have been reluctant to tell. Few families have been unaffected.

A: I’m working on a new novel that is an homage to Hemingway’s The Sun Also Rises. It’s a contemporary generational story about expats who have come to San Miguel de Allende, Mexico with their last dreams.

I’m also working on a memoir in essays and plans for a third novel about two women during World War II, one German and one American, and the impact of their war experiences on their families through the generations.

Today, we are living in times where we are watching people of great courage make coming of conscience decisions every day: Mitt Romney voting for impeachment, Captain Brett Crozier of the Theodore Roosevelt who made a career-ending move to protect his crew from COVID-19, etc. In this highly charged environment, we will continue to see more.

Judy was right, we have a responsibility to change the world. Her message is happening as we speak. The Fourteenth of September is “living” historical fiction, its issues and events as relevant today as when they first happened.

One final important note. I don’t want to create the impression that The Fourteenth of September is a tough story. It has many dimensions: mother/daughter, generation gap, first love, college life, girlfriends, etc. And, let’s remember it starts in the ‘60s—it’s also full of sex, drugs, and rock and roll (it even has its own play list). It’s a lively read. Enjoy.