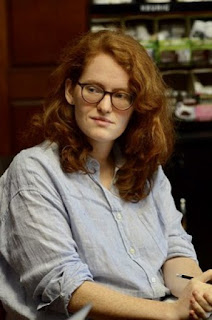 Q: How did you first get interested in Machado de Assis's work, and in the field of translation?

A: I got into Latin American literature in high school, but I hadn't heard of Machado de Assis until college. Translation came before Machado, actually.

Through a convoluted series of events, I wound up translating a biography of Carmen Miranda (if the name doesn't ring a bell, think "fruit hat") in my freshman year, after just a semester of advanced Portuguese. When I took the job, I saw it as an interesting linguistic challenge and a way to make some pocket money.

Before I knew it, I was working obsessively into the night, lovingly crafting sentences in English. When I got to the passage where Carmen died, I found myself crying at 3 in the morning as I typed the words out, feeling as though I was killing her with my own hands.

The experience gave me a powerful connection with Brazilian culture and left me thoroughly hooked on translation. Those two factors weighed heavily on my decision to major in Spanish and Portuguese – and that's how I met Machado.

There's a story that I like about William Grossman, the first translator of Memórias póstumas de Brás Cubas. He moved to Brazil in the late 1940s to teach at a college – nothing to do with literature, he specialized in the economics of air transportation – and wanted to improve his Portuguese for his lectures.

So he went to his Brazilian colleagues and asked: "Who is your greatest writer?" And the answer was: "Machado de Assis." At that point, only a few of Machado's stories and none of his novels had been brought into English.

Grossman devoured the novels, was enchanted by The Posthumous Memoirs of Brás Cubas, and translated it as a labor of love. (The eventual publisher, Noonday, transmogrified the title into the spoiler-y Epitaph of a Small Winner.)

He's this tremendous looming figure, the founder of the Brazilian Academy of Letters, the patriarch of the nation's literature – which is all the more impressive given that he was completely self-taught, came from a poor family, and was a mixed-race man in a country that only abolished slavery in 1888.

So at some point in sophomore fall, I sat down to read one of his novels on my own, and that happened to be Memórias póstumas de Brás Cubas. I was blown away, just as Grossman had been: the structure is wild, the images are remarkable, and it's as if the book's constantly catching you off-guard and thumbing its nose at you.

It's one of those classics that makes it very clear from the get-go why it's stuck around so long – and I remember feeling some wondering indignation that Machado de Assis wasn't better known in English.

Q: How did you end up translating this new edition of The Posthumous Memoirs of Brás Cubas?

At that point, all of his novels had been translated into English, so I figured I'd just have the trouble of hunting down the appropriate quotes whenever the critic cited them.

But something strange happened when I copied and pasted: often the translated bits just didn't "fit" with the close reading. It wasn't the fault of the critic or the translator, just a simple demonstration of the fact that translation isn't a linear process but a profoundly interpretive one.

Translators and critics alike are close readers, and in this case some of the translators' readings didn't coincide with the interpretations of the author I was working on. So to make sure the book made sense, I had to retranslate snippets of Machado's works to fit with Castro Rocha's analysis.

I'd been working as a translator for several years at that point, and had since studied Machado more thoroughly as an undergrad, but working with this prose – all due respect to the other authors I'd worked on – was something else entirely. There's a rush that comes from handling such magnificently calibrated sentences, it's hard to describe.

Anyway, I finished that project just as I was entering my Ph.D. program at Brown, and I'd already been thinking about dedicating my dissertation to a single literary translation. Translators dream of having more time to dedicate to their work, and a Ph.D. program offers nothing if not time and obsessive scrutiny of a single object, so it felt like the obvious choice. 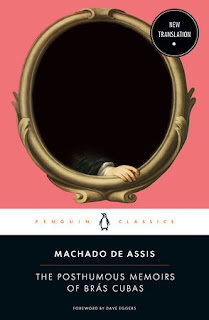 That's how I spent the better part of five years researching, preparing, and revising a new English-language translation of The Posthumous Memoirs of Brás Cubas. Publication was an afterthought. I wanted it to see the light of day, of course, but I didn't want to contact publishers prematurely and be forced to turn in the work before I felt it was absolutely ready.

Right as I was sending my dissertation over to my committee, I reached out to Penguin, and the rest is history.

Q: What do you see as Machado de Assis's legacy today?

A: Machado de Assis's legacy in Brazil is monumental and has never been in question; the story of literature in the country is almost built around him.

That's why it's all the more jarring for Brazilians – and non-Brazilians who "discover" him – to realize how little he's known outside Brazil. That's due in part to the fact that his novels only began to be translated into English nearly a half-century after his death, in the 1950s.

Right now, his legacy in the English-speaking world is a small but meaningful footprint on what I've referred to as a very exclusive fan club, which includes Susan Sontag, John Updike, Salman Rushdie, Harold Bloom, Philip Roth, Allen Ginsberg, Lydia Davis – and now Dave Eggers, who wrote a beautiful preface for my translation.

Q: As a translator, what impact do you hope your work has on readers?

A: Translation is an act of love – I would never have been able to spend five years staring at a novel I wasn't besotted with – and so I think that the most basic hope is to make that love contagious.

This is also the first annotated translation of the novel in English. I included dozens of endnotes on the social, historical, cultural, and literary allusions that are sewn into the text, the idea being that readers can enjoy the book first, hopefully have their interest piqued, and then revisit it with the notes for greater context.

Machado has often been misunderstood as nothing more than a belated imitator of Laurence Sterne, and that misreading stems from a lack of knowledge about Brazilian history and the ways he's weaving terrifically cutting and subtle critiques into this light, sarcastic prose.

A: Right after I submitted to Penguin, I started working at Rádio Novelo, a podcast production company in Rio, and we're launching two narrative podcasts in the next few months – only in Portuguese, though.

On the translation front, I'm now in the strange position of thinking first about publication strategy and second about literature, which has paralyzed me a bit.

I've been slowly working on the travel diaries of Mário de Andrade, a modernist poet who traveled up and down the Amazon in the late 1920s. His masterpiece, Macunaíma, was translated abysmally in the '80s and is about to get a new translation by Katrina Dodson next year, so maybe the Machado moment can be followed by a Mário moment.

A: There's been tremendous enthusiasm in Brazil about the acclaim for the translation and Machado, which I can attribute in part to people's being desperate to get the word out that Brazil is about so much more than Bolsonaro. Being reminded of the brilliance of Machado de Assis is like a national pick-me-up, one that's sorely needed right now.