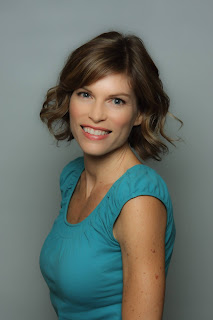 Lori Alexander is the author of the new children's book A Sporting Chance: How Ludwig Guttmann Created the Paralympic Games. Her other books include All In a Drop and Famously Phoebe. She lives in Tucson, Arizona.

Q: Why did you decide to write this book about Ludwig Guttmann, the creator of the Paralympic Games?

A: My daughter was born with a condition called pseudoarthrosis. It affects the tibia in her left leg. We didn’t have a diagnosis until she was bearing weight as a newly walking toddler and her leg broke. The bone wouldn’t heal and after six months, her leg was still fractured.

In many cases, children with pseudoarthrosis undergo multiple surgeries in attempts to get the affected bone to heal. If the bone won’t fuse, amputation is the next course of action.

Although we’ve had some success with surgeries, bone grafts, rodding, and a leg brace, the amputation has always been in the back of our minds. We love to watch the Paralympics to show our daughter (now 13 years old) that legs aren’t required for gold medals. Success comes to those who work for it. 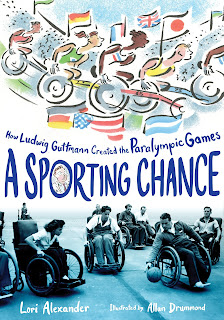 Q: What kind of research did you do to write the book, and what especially intrigued or surprised you in the course of your research?

A: There was very little written about Ludwig’s life for adult readers and zero books for children. I found one book for adults based on Ludwig’s unfinished autobiography, so that was a great primary source.

As a neurologist, Ludwig published much of his spinal injury research in various medical journals. Those articles gave me specific details and statistic about paraplegia. In addition, the International Paralympic Committee and Stoke Mandeville Hospital (where Ludwig worked) both have helpful websites with historical information.

What surprised me most while I was researching was the dismal survival rate for people with spinal injuries in the early 1900s. About 80 percent of paraplegic patients died, mostly from bladder infections and infections caused by bedsores from their full-body casts. Doctors gave these patients an unfortunate nickname: “incurables.”

But Ludwig wanted to make a difference. He removed casts and worked to get his patients sitting upright in bed. He brought in physical therapists and wheelchairs and gave his patients simple jobs to do.

He wanted these young men and women, many who were soldiers in WWII, to feel like part of society again. He had high expectations. When his patients believed simple tasks, like feeding and dressing themselves, were no longer possible, Ludwig encouraged them to try until they were successful. 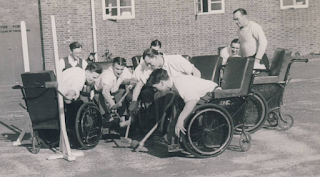 Q: What do you see as Guttmann's legacy today, and what do you hope kids take away from the book?

A: One day, out on the hospital lawn, Ludwig caught a group of men in their wheelchairs using upside-down walking canes to hit a puck. It reminded him of polo without the horses. Ludwig began to wonder if sports could help with rehabilitation. He brought in equipment to teach his patients archery.

In 1948, he hosted a small archery competition between two hospitals. More sports and more participants joined each year. At first, people laughed at the idea. They told Ludwig that no one would watch his wheelchair games.

But that didn’t stop him. His small competition on the hospital lawn grew into Paralympic Games we know today. In 2016, more than 4,000 athletes competed in the summer Paralympics in Rio. The Games broke viewership records with a global television audience of more than 4.1 billion people! 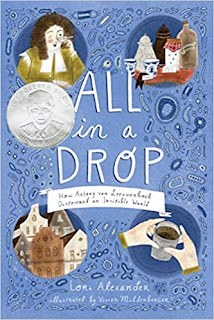 As for young readers, there aren’t many books that feature people with disabilities. It’s important for kids with varying abilities to see themselves in books. And it’s important for all readers to be exposed to the themes of compassion, tenacity, and social justice that are woven throughout this story.

Q: The book includes brief sections on six athletes--how did you choose the people to feature?

A: There are so many amazing Paralympic athletes, it was tough to stop at six! But I had already gone above my wordcount in writing about Ludwig’s life, so my editor stopped me at the six “mini-bios” at the end.

We tried to feature both male and female athletes from various backgrounds/countries who each played a different sport. We ended up with a swimmer, a wheelchair marathoner, a hockey player, a basketball player, a wheelchair sprinter, and a downhill skier. Lots of gold medals won by this talented bunch!

A: I’m working on a biography about another figure important to the history of medicine. This one hasn’t been announced yet so I won’t give away too many details. But it will be in a similar chapter book format, with lots of full-color illustrations, for grades 3-7. 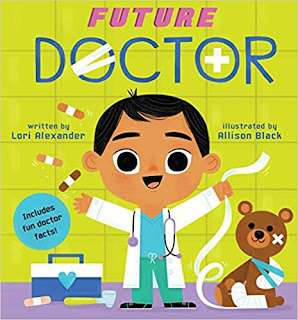 In addition, I have a board book releasing in October from Scholastic (Future Doctor is the fourth book in the Future Baby series). I also have a picture book called Mini Mighty Sweeps, about a little street sweeper with a big job to do, coming from HarperCollins in 2022.

A: A lot may change in the next few months but I’m really hoping my kids and husband will be able to go back to school/work this fall. I’m not getting nearly as much writing done with a full house! Of course, we will do what needs to be done to stay safe. I hope all of your readers are taking good care of themselves. Thanks for having me on your blog, Deborah!