John "Gene" E. Dawson is the author of the new memoir Farm Boy, City Girl: From Gene to Miss Gina. He lives in the St. Louis area.

Q: Why did you decide to write this memoir, and how long did it take you to write?

A: I had so much encouragement from many friends and relatives. A lot of people said they were interested in the family stories I had told through the years. Since I am the oldest child on both sides of my family, I knew my aunts and uncles longer than the rest of my cousins.

My cousin Judy Hilleman really wanted me to do it—she even offered to send me a tape recorder to get my memories recorded. I don’t use a computer. My good friend Lana James from Millersburg (Iowa) was very encouraging, too.

So in the winter of 2003 to 2004, I started writing by hand. Sometimes I would get the writing bug and sit up and write for a few hours, usually during the night. During that winter, I wrote about my childhood through age 28 (1959).

I would send copies of the handwritten pages to cousin Judy, who typed them out. During this time, my sister-in-law Geneva Dawson also scanned many of my photos from those early years. After they were both done, I took the typed copy with the photos to Kinko’s and had it spiral-bound. I had enough printed for family and friends. 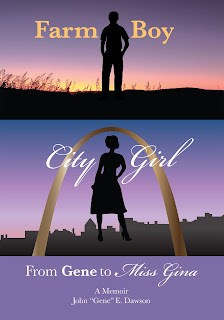 I don’t think I ever considered getting it published then; I was just writing a summary for my friends and relatives. I also didn’t want to offend anyone with anything I wrote. Sometime after that, I told my niece Tammy Bonnicksen, since she is an editor, that she could try to get it published after I passed to make sure I wasn’t here if I did offend someone!

But people kept asking about the rest of my life, wanting to know what happened after 1959. So 10 years later, in 2014, I started again and wrote a few hours at a time. After I would write some pages, I would send them to my friends Twila Gerard and Shelly Gerard, and they would type them. When they were all done, I again went to Kinko’s and had the new section printed in spiral-bound form.

Since that time, my life has changed a lot. My health declined, and I almost died in August 2018. Thank God for supplemental oxygen! I was told then I would not be going back to my own home again, and I have lived in an assisted-living facility since.

It was after I sold my house early in 2019 that things came together that led me to being confident enough to get the book published while I was still on this earth.

My Realtor introduced me to Geoff Story, who is making a documentary, Gay Home Movie, and Geoff invited me to be part of his project. Then early last summer, Geoff and I were interviewed for The New York Times.

When I had my picture and quotes in the Times (“L.G.B.T.Q. in the Midwest,” which was in the June 23, 2019, print edition), I felt I was speaking for the Midwest LGBTQ community so I thought I might as well tell my complete story.

So I decided that I wanted to see the book completed before I was gone. Tammy and I agreed to publish on Amazon and not try to find a publisher—the goal being that I would still be around when it came out! And so she got it all in chronological order for me, proofread it and hired a graphic designer. What resulted was the book.

A: It just came to my head. It just did. The title really relates that it is the story of my life. I did go through stages from being a farm boy, and then to the tragedy—the death of my mother—and the transition part. Then finally, the third part of the book is about my life as a “city girl.”

When I had the two sections printed at Kinko’s, “Memories” (volumes one and two) was the title. But then I thought that anybody could just write “memories.” That was such a bland title. But since then, I kind of decided that—and have been told—that I am not bland.

Q: Your family features prominently in the memoir—have many of your relatives read the book, and what do they think of it?

A: Well, I would say the majority of my first cousins have read it. I wrote about all of my 23 aunts and uncles in the book, so the cousins do like reading about them. I have had many calls from my cousins and other relatives after they have read it, and their responses have all been positive.

There’s only one close relative who hasn’t read it and that’s my brother Bernie. I didn’t think he’d read it because he just can’t imagine his oldest brother being gay, leading a life like I did. I did send a copy of the book to him after I told him he would like the chapters about the 1930s and 1940s. He is a wonderful brother and we talk about every other day, but he just can’t quite handle that part of my life.

A: That life for gay people keeps improving, and you can be yourself. Always be yourself. Don’t be afraid of anything, and don’t live in fear. We gays are just like everybody else—no better, no worse. We are your brothers and sisters.

Accept others as they are. Don’t ever try to tell anybody how to live. Just encourage everyone to be the best they can in every way and do the same for yourself.

A: Keeping alive! Since I’m 89, I’m trying to stay as healthy as I can from day to day. I have joked that I would write a sequel when I turn 95, but I might have to take that back.

I also have been newly back in touch with some of my cousins, and it certainly has been wonderful to talk to them. Since I live in an assisted-living facility, I haven’t been able to see anyone from outside since coronavirus restrictions began. So I haven’t seen any of my brothers, other relatives or friends since the book came out.

Thank God for the phone. I don’t do texting and all that stuff.

Thank God too for the staff at my facility. They are super. They have been very supportive of the book—every one of them.

A: I have always liked biographies better than fiction, so that’s another reason I wanted to get my story out. Truth is stranger than fiction.

The book is honest. It all really happened, and it’s not a figment of somebody’s mind. My “Iowa-innocent,” Great Depression, poverty-stricken childhood was quite different from my not-so-innocent “City Girl” days. There’s quite a bit of Catholic guilt in there, too. But I got through it.

It’s just the story of my life and the various phases I went through. I had to be so secretive and lead a double life. Finally, I got to the point where I don’t have to lead a double life anymore. After 89 years!

I told everything like it was. I didn’t cover up anything including some things that perhaps didn’t put me in a flattering light. Some people have told me that there is quite a bit of drama in the book. I didn’t really realize that my experiences were more dramatic than a lot of people’s, but when I look back now, I think those readers might be right!