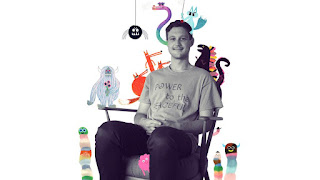 Rob Hodgson is the author and illustrator of the new children's picture book My Best Friend. His other books include The Woods and The Cave. He lives in Bristol, UK.

Q: How did you come up with the idea for My Best Friend?

A: My previous two books have both been about seeing relationships from different perspectives, but those explored somewhat tyrannical characters and the humour that is found there.

I really wanted to make a book with a ridiculously positive character as the lead, and explore similar themes. That’s how Mouse came to be. I really liked the idea that Mouse has huge optimism, far outweighing his small size.

So Mouse and Giant Owl’s relationship was born out of those previous books and wanting to round out a loose trilogy of books.

Q: Did you work on the illustrations or the text first, or both simultaneously? 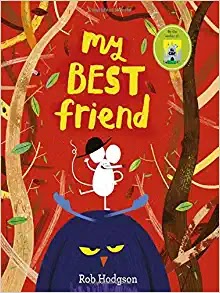 A: I always tend to start with the images. Usually I’ll sketch the characters in some early form, then start putting them in scenes, and then I start writing from there.

A: On one level I just hope that kids find the story fun, and that reading alone or with someone else brings them some happiness. That’s the important base level goal of making books, for me, I think.

But in terms of subtext, I hope the text and images telling two different stories give kids a sense of things not always being as they first seem. Upon further investigation there is always another side to every story.

Hopefully these books can sharpen a kid’s (and adult’s) sense of empathy and critical thinking in that way. 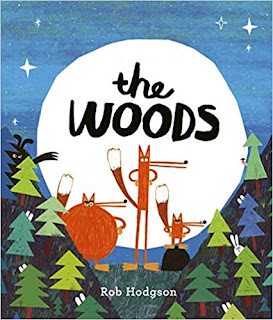 I think there’s another layer in these books that is open to interpretation, about right and wrong.

I never want to be too didactic with that, but hopefully the ending of the book, and Mouse’s outlook on their friendship, is open to further discussion outside the book. It’s important to me that morally, a book shouldn’t be a closed story that wraps up too neatly.

Q: How did you first become interested in creating children's picture books?

A: Two things really. The first thing being I was sent a huge (like, comedically huge) sack of kids’ book from an agent, who said he thought I’d be good at working on books. I’d never considered it before, and his gesture gave me the permission to think I could do it.

The second thing was working on a commission to illustrate someone else’s book (I worked as an illustrator for years before doing books).

I loved doing it, and learnt a lot from it. It really made appreciate everything that goes into writing: characters, page turns, world building, pacing, etc., etc. I really fell in love with the format of kids’ books then. 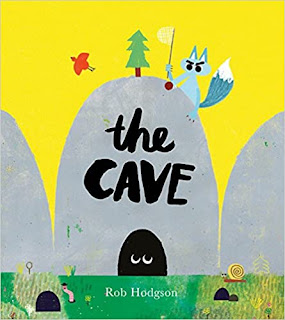 One is a book about the weather, which I’ve been trying to write for years!

The other is an opposites book, which is way harder to write than you would imagine. When you get into what opposites really are, they’re actually weirdly philosophical.

Once I wrap those up, I’m going to take a look at all the unfinished projects that have been sitting on my computer for years! I really want to finish writing a TV pilot I’ve been working on. And a bunch of unfinished kid book ideas. Not totally sure yet!

A: I don’t think so, that’s probably information overload already. Go lie down and take it easy!