Gretchen Anthony is the author of the new novel The Kids Are Gonna Ask. She also has written the novel Evergreen Tidings from the Baumgartners, and her work has appeared in a variety of publications, including The Washington Post and The Write Life. She lives in Minneapolis.

Q: How did you come up with the idea for The Kids Are Gonna Ask?

A: I am a huge podcast fan, so the idea of putting a podcast at the heart of a novel was not a stretch for me.

The question of what that podcast would be, however, evolved in the aftermath of the 2018 Marjory Stoneman Douglas High School shootings in Florida. The students there decided they were finished waiting for something to be done about guns in the U.S. and took over the debate.

They started a national movement and in doing so, a few of their most outspoken leaders became public lightning rods -- one side of the debate celebrated them, the other vilified them. It didn't matter that they were 16, 17, 18 years old.

As a mom, I was both moved by and worried for those kids, proud that they stood up so bravely for change, but horrified at the emotional, life-altering toil they had to endure in the process. I wondered, what else could cause that sort of public reaction? Sex, secrecy and paternity was my answer.

Q: The novel blends the perspectives of your characters with podcast transcripts, emails, and other posts. How did you decide on the book's structure?

A: The podcast was the most important to me, and I didn't want to limit it too much by putting short, paragraph-length excerpts within the chapters. The show needed enough space to feel authentic and demonstrate itself. 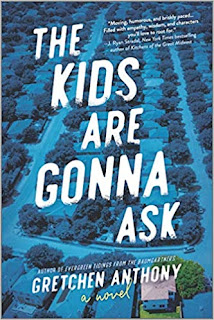 As for the other things--emails and texts, etc.--my books have always experimented with interstitials (hey, points for those learning a new vocab word!). They're a trick I stole from Fannie Flagg, whose novels include everything from recipes to radio shows. They give color and texture to the characters and plot in a way I don't think narrative can always deliver.

A: I had a general sense. For starters, I knew the kids would find their father (not a spoiler, don't worry). But I didn't want the book to end there because the consequences of meeting him certainly don't. That left me with the question of what happens after they find him. How does that affect the kids and what do they do/believe/mess up as a result?

Q: What do you think the book says about the importance of podcasts and social media today, and also about definitions of family?

Every one of us has so much content at our disposal, we don't have to compromise on how to spend our time. 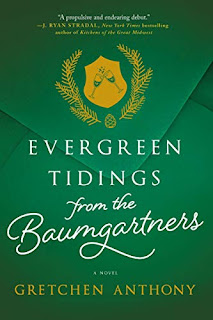 For example, our family has a hard time even finding a movie or TV show we all want to watch. It drives me crazy and yet, I'm just as guilty of being too picky as my kids. How can we exist and thrive together if it's so easy to go our separate ways? That's the big question of our times, I think.

A: Currently, I'm finishing an audio-only piece for Audible and their Audible Originals program. Title and release date to come. The story is a little more lighthearted, but also timely, about a celebrity wellness influencer whose life isn't nearly as perfect as she would have you believe.

A: I've been really touched by early readers who write to tell me about their own a-typical origin stories. One woman wrote to say that, as an adoptee, this was one of the first novels that really "saw" her. It made me want to cry with relief because I was so concerned about capturing the fundamental, emotional elements of what it must be like to wonder, "Who am I? Where do I come from?"

In writing the book, I had early input from friends who'd been on their own journeys and I engaged a sensitivity reader, but hearing from readers that I'd connected with them was incredible.