Fred Bowen is the author of the new children's picture book Gridiron: Stories from 100 Years of the National Football League. His many other books include Speed Demon and Lucky Enough. He writes about sports for The Washington Post's KidsPost section, and he lives in the Washington, D.C., area.

Q: How did you come up with the idea for Gridiron, and how did you choose the stories you include in the book?

A: Actually, the idea for Gridiron: Stories From 100 Years of the National Football League came from the illustrator, James Ransome.

James approached me about five or six years ago at a conference after he heard about my books and my weekly kids sports column.  He told me about his idea to write a history of the National Football League (NFL) for young readers that would be something like what Kadir Nelson did for the Negro Baseball Leagues in We Are the Ship.

I loved the idea and was excited about the thought of working with James.  I have admired his art for years.

James and I discussed what stories should be in the book. James is a HUGE football fan. We had a list of about 30 possible chapters that would tell the story of how the NFL started as almost nothing and grew into the most popular sports league in America. We settled on the twenty in the book after some trial and error.

Q: You've written about football before--how did you research this book, and did you learn anything that especially surprised you?

A: I read a LOT about football and the NFL. The bibliography of Gridiron lists about 30 books as well as numerous articles and websites. I actually read more. My editor asked me to cut down the bibliography because of space considerations. 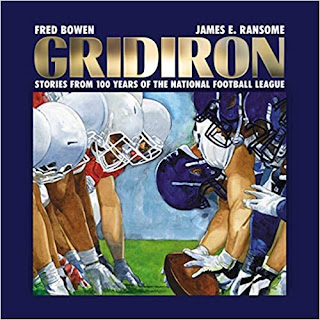 What surprised me the most in my research was how small-time and disorganized the NFL was during its early years.

For example, teams made their own schedules and so teams would play a different number of games during the season. The league did not have a championship game until 1932, 12 years after the founding of the NFL. That first championship game was played in a Chicago ice rink! The NFL didn’t even keep statistics for the first 10 seasons or more.

Another thing that surprised me were all the rule changes.

In the early days of football, for example, if a runner ran out of bounds the next play would begin at the sideline. So all the players on offense and defense would line up on one side of the ball. They didn’t start to begin all offensive plays near the middle of the field until 1933.

Q: What do you think James Ransome's illustrations add to the book?

A: The illustrations are essential to allow a young reader who may only know the NFL as they see it today to visualize how the players and games looked 40, 60, or 80 years ago. 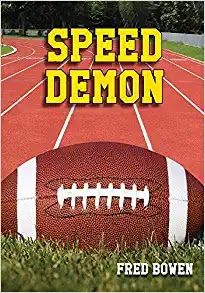 I love the illustrations that James did at the beginning of each quarter. They go from the player of the 1920s with a leather helmet, no facemask and minimal padding to the modern player who wears so much equipment that he looks like he stepped out a science fiction movie or a video game.

Frankly, I am in awe of James’s achievement in this book. He produced something like 70 to 80 separate illustrations. Portraits, action pictures, old-time players, modern stars.

I expected his illustrations would be terrific, having admired his art for many years. But I think James really outdid himself in this book.

Q: What do you hope readers take away from Gridiron?

A: I want our readers to realize the NFL was not always the wildly popular sports enterprise they see today. During those early years, pro football was not very popular and the players were not the rich superstars we see on television or read about in the newspapers.

For example, only 31 of the 81 college players selected in the first NFL player draft chose to play in the NFL. The others went into other, better-paying careers. The first player selected became a sportswriter (!) and later a businessman. That is unthinkable today. 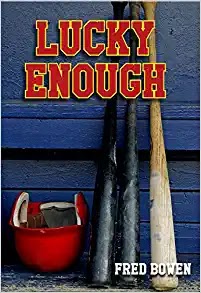 I think sports history is a great way for young readers to get interested in history in general. The great lesson of reading any kind of history is that things were not always as you see them today. But if you understand and know something about the past it helps you understand and make sense of the present.

A: James and I are teaming up on another sports history book that is scheduled to be published in 2022. I have pretty much finished the text and James is beginning to work on the art. I am very excited about that project. It should be a great follow up to Gridiron.

I also have sent off a manuscript to my editor at Peachtree Publishers in Atlanta. It is the latest book (the 24th!) in my Fred Bowen Sportstory series that combines sports fiction and sports history.

The tentative title is Soccer Trophy Mystery and is about a soccer trophy that disappeared from the town library years ago. My characters try to solve the mystery. The history in the back of the book is about a very famous soccer trophy that disappeared years ago and has never been recovered…the original World Cup trophy! The book is scheduled to be published in 2021.

A: I am still writing my weekly kids sports column for the KidsPost page of The Washington Post. It has been more challenging because the crisis caused by the novel coronavirus stopped almost all sports.

Still, I have been writing the column for 20 years. That means I have written more than one thousand columns. So I am confident that I will think of something to write each week.