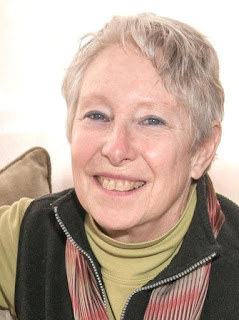 Jennifer Berne is the author of the new children's picture book On Wings of Words: The Extraordinary Life of Emily Dickinson. Her other books include Manfish, On a Beam of Light, and Calvin Can't Fly.

Q: Why did you decide to write a picture book about Emily Dickinson?

A: Gradually, over the years, I became more and more interested in Emily Dickinson and her remarkable mind and writing.

There’s something about Emily that, once you begin to enter her world, becomes hypnotic and almost addictive. She and her poetry just seem to draw you in deeper and deeper. And the further in you go, the more fascinating she and her world become.

I only write about people who fascinate me — people in whose world I want to spend the many many months, sometimes years, it takes to research and write a book.

Q: How did you choose the excerpts from her poetry to include in the book? 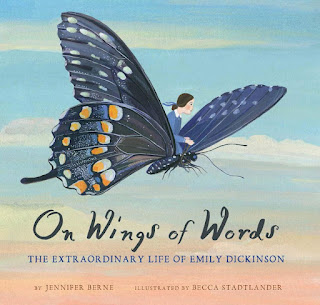 A: It really grew out of the story itself. I wanted Emily to be a part of telling her life story. So, as I distilled her life down to its essential elements, I searched for Emily’s words about each of those moments, each of those themes.

I see the story as a duet between me and Emily, with both of us weaving in and out of each other’s words, to create the deepest and truest version of what she and her world view were about. I was fortunate to have such a brilliant writer as my collaborator!

A: I think Becca’s illustrations bring Emily’s world to life perfectly. Both through capturing the feel and essence of the time period, and also through the beautiful symbolism Becca added throughout.

There is a visual poetry to the book, a deep level of creativity in the illustrations, that makes Emily’s thoughts and poems feel as though they’re actually living on the page. 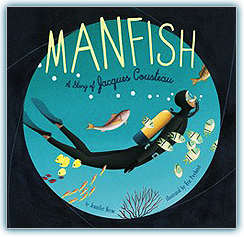 Q: What do you hope kids take away from the book, and what do you see as Emily's legacy today?

A: Emily was a free thinker — she was true to her own experience and her own mind. She wouldn’t let other people tell her who to be, how to be, or what to think. She observed the world astutely and with a deep level of intellect, reason and sensitivity — and from that she formed her world view.

I hope the children who read this will be inspired by Emily’s strong spirit, so that they too will stay true to themselves, to their own observations, and to their own spirit. Emily wrote, "My country is truth.” If that resonates with kids, I’ll feel the book was a success.

Also, if the book inspires children to try their hand at writing, to discover the rewards of writing, and how writing can expand your world, that would make me very happy. 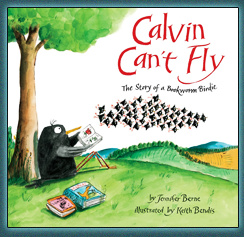 A: I have several projects in the works right now. I have one upcoming book, How the Sea Came to Be, about the formation of the oceans and the creatures that evolved within them — all told in rhyming verse. That’s being illustrated by the fabulous Amanda Hall, and will be published by Eerdmans.

I have another book, Dinosaur Doomsday, about the dramatic event that wiped out the dinosaurs and set the stage for the evolution of mammals which lead to us. That one is about to be illustrated by Caldecott winner Brian Floca, so obviously that’s very exciting. It will be published by Chronicle.

And I’m in the process of editing  another with Eerdmans — a biography of the moon.

Beyond those, I’m working on a couple of new manuscripts. So we’ll see where they take me. Hopefully more books will be born.

A: Just one thing. I love to hear from my book’s readers. Once a book goes out into the world, it’s like a child leaving home. It’s on its own, entering the world and lives of so many people I don’t know, and hopefully having a positive effect on those lives in some small way.

So I find it fascinating and rewarding to hear where my books have been, who they’ve met, and how they’ve touched people — or best of all — inspired them.