Norman Ohler is the author of the new book The Bohemians: The Lovers Who Led Germany's Resistance Against the Nazis. His other books include the book Blitzed: Drugs in the Third Reich. He is based in Berlin, Germany.

Q: How did you first learn about Harro Schulze-Boysen and Libertas Haas-Heye, and at what point did you decide to write a book about them?

A: I found Harro’s farewell letter to his father in the Munich Institute for Contemporary History. I was fascinated with his eloquent writing style - and especially with the content. I thought it was crazy that Harro’s story is not that known even though he formed the most important resistance group against Hitler.

Q: You begin the book with a conversation you had as a boy with your grandfather. Why did you start there?

A: I want to give the readers an account of who I am: who is the person telling us this story, where does the narrator come from. I believe it heightens the credibility of the story, makes it more personal. 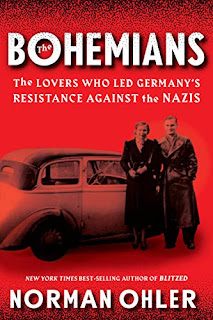 A: I tried to meet as many relatives of Harro and his friends as I could. I also studied numerous documents in the German Resistance Center in Berlin. The group’s approach to “free love,” their fight against patriarchy most surprised me.

Q: What do you see as Harro and Libertas's legacy today?

A: That we must dare to fight for freedom, and must always have a watchful eye towards leaders who abuse their power. Democracy is worth fighting for.

A: Don’t trust the pharmaceutical companies.