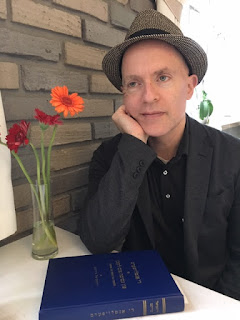 Yermiyahu Ahron Taub is the author of Beloved Comrades, a new novel in stories. His other books include Prodigal Children in the House of G-d. He is also a translator from Yiddish into English, and he lives in Washington, D.C.

Q: What inspired you to write Beloved Comrades, and how did you create your large cast of characters?

A: Over the years, in poetry and prose, I have been repeatedly drawn to exploring human relationships within the framework of organized religion, specifically Judaism, and the ways in which individuals navigate their own desires, longing, and dreams through and around religious strictures and cultural obligations.

The synagogue, with its inherent blend of the spiritual, institutional, social, and quotidian, struck me as a supple vehicle to explore these and other concerns.

As I embarked on the project, the characters came to me, making their voices heard, advocating for and ultimately insisting upon their own inclusion. One character led to another; each new plot development required me to step back and map out and consider anew the trajectory of the evolving whole.

My role was to make space for these protagonists, to chart and sculpt their concerns, interactions, and dreams with clarity, to welcome them into the novel's fold.

Q: The book is described as a "novel in stories." How would you define that in contrast to a story collection or a novel?

A: Although some story collections, including my own, Prodigal Children in the House of G-d (2018), may contain interconnected stories or share themes and subjects, I tend to see them as assemblages of discrete entities. 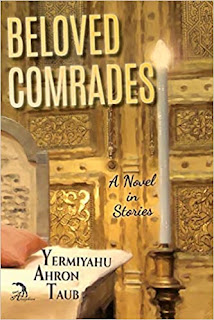 In a novel, even one with a broad canvas and a large cast of characters, there is typically a focus on particular characters and their destinies. The plot line returns to those characters and the narration repeatedly picks up the points of view and voices of those same characters at different phases in the book.

In Beloved Comrades, all of the characters and their stories are completely connected. And yet, each of the stories, except for one, focuses on a different character. Yehoshua Weissman is the only character around whom two stories ("Blessings After Bread, Baked and Broken" and "Her First Vacation") are centered.

The stories can all function on their own, and a number of them have done just that done in previously published form in literary journals. So although different stories refer repeatedly to the same characters, the narrative point of view and plot don't typically emanate from the same characters. So that explains the "in stories" designation.

The appellation of "novel" comes from the "wide-angle shot" that looks at the synagogue community as a whole. Indeed, the synagogue itself — the building, its spirit, the shelter it provides to the gathering of souls, and its ultimate fate — is the book's unifying thread, arguably its central character.

It is to the synagogue that the plot returns to, or rather focuses on, since it never left it. So the synagogue provides the focus and structure of the novel while the narrow focus (close-up shot) of the individual stories give the book its story collection feel. In the end, this book is a hybrid. I've also seen this genre referred to as a "composite novel."

Q: Can you say more about what you think the synagogue at the center of the book means to the various characters?

A: To many of the characters in the book, the synagogue is their spiritual anchor, the locus of all their dreams, a place for them to connect with God, tradition, friends, and folk.

Arnold Kestenberg founded the synagogue with the specific goal of it being a welcoming setting for all. And indeed it (largely) is. Yet, the synagogue is also a site fraught with tension as lofty goals tangle with ambitions, desires, long-simmering rivalries and rage.

For others, it is a place they need to escape, yet one which continues to draw them throughout their lives. For Rosa Vakhtman Klein, it is the embodiment of all that she wishes to put behind her. And there are those outside the synagogue community, and indeed the faith, who have to face their own reactions to the synagogue's presence.

Throughout the book, I sought to balance these ambiguities and tensions. Ultimately, the synagogue figures as a critical life force of its own — essential, but also mysterious, perhaps not entirely knowable even by its most vociferous advocates.

A: In Beloved Comrades, I aimed to create a portrait of a faith community that was inclusive but not romanticized or idealized. I sought to shine a light on the seemingly "ordinary," mostly not particularly learned, individuals who pursue and participate in a vision of a welcoming Judaism, all in the shadow of an august yeshiva of advanced Talmudic learning. 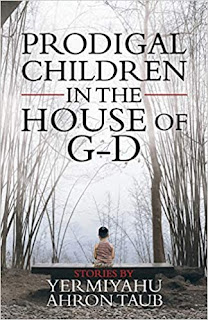 The experiment they create is flawed, imperfect, but hopefully, also compelling.

Through that holistic approach, I wanted to foreground themes of gender, sexual orientation, gender identity, and social justice within a seemingly traditional framework. My goal was to present queer characters who were fully developed in their own right, not merely ancillary friends of the straight principals.

A: In addition to getting the word out about Beloved Comrades, I'm also working to publicize the recently published volume of memoirs by Rachmil Bryks (1912-1974) that I've translated from the Yiddish called May God Avenge Their Blood: a Holocaust Memoir Triptych (Lexington Books, an imprint of Rowman & Littlefield, 2020).

Bryks wrote with great clarity and emotional power about pre-Holocaust life in his hometown of Skarżysko-Kamienna, Poland, the early days of World War II in Łódź and elsewhere, as well as his wartime experiences in Auschwitz and other camps and places of captivity. I am extremely grateful to have these books make their way into the world, especially during a pandemic.

A: As these words come into being, suffering, sorrow, and injustice continue on such an epic scale in this pandemic. The Angel of Death seems to be lurking ubiquitously, poised to pounce upon the slightest "lapse."

It can be a struggle to foreground gratitude for all that one has while also acknowledging the anxiety and fear that it may all be quickly lost. It can be tempting to give up, to question the value of all of the things that we (used to) do.

Yet, along with my support networks and my belief in the work of science and public health practitioners, art sustains me. Even as I yearn for in-person connection, I am thankful for my creative projects — both my own writing and the translating of Yiddish literature for English-languge readers.

And I'd like to broaden that out to readers of this Q and A. Whatever work you're doing to make the world a better, more just place sustains me, sustains us all. Thank you.

And thank you, Deborah, for this chance to discuss Beloved Comrades.