John Bishop, M.D., is the author of the new novel Actof Deception, the second in a series that began with Act of Murder. He has practiced orthopedic surgery in Houston, Texas, for 30 years.

Q: This is your second book featuring your character Doc Brady. Did you know when you wrote the first one that you'd be writing another?

A: I had planned to write a series of books featuring Doc Brady, Houston orthopedic surgeon and amateur sleuth. I didn't have a specific number in mind, but thought I could piece together enough material to produce at least three novels.

I feel fortunate that thus far, new ideas have come about in the periphery of my thought processes before I have completed the novel I am working on. There are now eight Doc Brady novels, some completed and some in the works. The first two are out, the third, Act of Revenge, debuts Sept.10.

Q: How did you come up with the plot for Act of Deception? 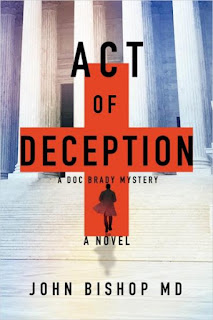 A: I came up with the idea for Act of Deception after having been personally sued in a medical malpractice case. An array of emotions was invoked by that nasty letter that came in a white envelope with green tape around it called a Certified Letter. I had a great deal of pride as an orthopedic surgeon, cared about my patients greatly and would never do any harm to anyone purposefully.

Once the lawsuit ended, although I came out victorious, it changed the way I practiced medicine. I learned unfortunately, to practice defensive medicine to try and avoid being sued again. All those emotions I tried to capture in the book. And I especially disparaged the legal profession and its herd of plaintiff lawyers, the basic root of the problem.

Act of Deception is accurate in depicting my personal experiences during the lawsuit, with a few fictional items thrown in for fun.

Q: Do you think your character Dr. Jim Bob Brady has changed from one book to the next? 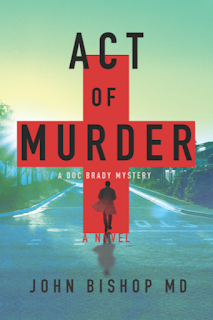 A: I have tried to keep Doc Brady the same consistent, caring, and talented surgeon in each novel. I have found, however, that it's not that easy. I have learned that everyday experiences of the author can influence a character that you are writing about. Sometimes I have to say to myself, “What would Jim Bob Brady do?" as a person, and not as a figure from the author's imagination.

And, I've found that putting Doc Brady in different situations changes his reactions to different issues, and sometimes it's difficult to take out what John Bishop MD might think or do about a problem and keep Doc Brady the consistent one.

In each novel, Brady finds himself in a different situation, from a neighbor boy being run over, to a malpractice suit, to the murder of an insurance executive who cancelled malpractice policies of plastic surgeons performing breast implants, to nursing home fraud (the fourth in the series).

A: I hope my readers appreciate the main character, Doc Brady, but also his mainstay in life, Mary Louise, the wife. Their son JJ figures in most plots, as an investigator of some note, essential in most of the novels in solving a major issue along the way. 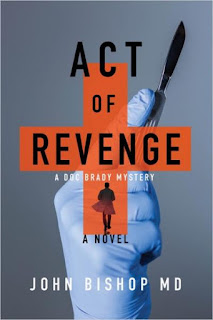 But Mary Louise is the rock upon which Doc Brady and JJ rely on for support. She's really the brains behind the whole thing, but I try and bring that out in a subtle fashion. She is the prototype wife, mother, and supporting partner. In Act of Deception, her skills are taxed to the max with all the unfortunate things the befall her husband in the novel.

I also hope readers will take away from the book the extreme emotional trauma a physician and his or her family goes through during a medical malpractice lawsuit, and puts us doctors in a more realistic light.

A: I'm working on editing Book 5 in the Doc Brady series. Book 4, Act of Negligence, is about nursing home fraud. Book 5 is called Act of Fate, in which Mary Louise sustains a life-threatening injury and slips into a coma.

Doc Brady and JJ assist the police in trying to find the source of the injury, while at the same time get involved with the murder of a socialite and her assailant, and try and decipher if these separate events intersect in some macabre fashion. I'm having an especially good time with this one.

A: I would like to thank you and your readers for this opportunity. I appreciate your support very much,...as does Jim Bob Brady.