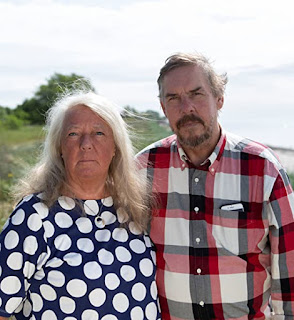 Ingrid Wall is the author, with her husband, Joachim Wall, of the new book A Silenced Voice: The Life of Journalist Kim Wall. The book is about their late daughter, a Swedish journalist who was murdered in 2017 while covering a story. Ingrid Wall is also a journalist. She lives in Sweden.

Q: You write, "Writing this book about Kim has been a healing journey." Why did you decide to write this book about your daughter, and can you say more about how writing the book affected you?

A: It all began as diary notes on Saturday August 12, the day after we got the news that Kim was missing. As an old journalist I think it's normal behavior to write things down, to help the memory.

In this case, the whole world was upside down, the phones rang all the time, the inboxes went crazy, we had journalists ringing at our door - and in all this we were trying to understand what had happened. After a couple of weeks the writing had been a way for me to collect what’s happening and give it a structure.

We had plenty of offers from TV and media that we should tell Kim's story, but we refused. If someone should write that story it should be us. One day I decided to reach out to a publishing house to see if there was an interest in the book, and yes, there was.

For me the whole writing process has been a journey with tears and laughter, a walk along memory lane. It has been healing for me to go back to all memories of Kim. I had to put my feelings to paper, and that gives me the opportunity to reflect on both the good and bad things. 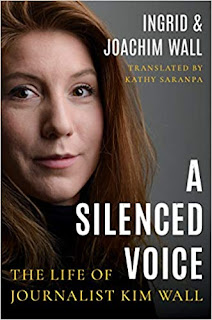 Another good thing is that the book has affected a lot of people in a positive way. It's not easy to talk about these feelings, but we have had a lot of people who reach out to us and say thank you for writing about sorrow and grief.

Q: The book recounts the year after Kim's murder, but you also tell about her life up to that point. How did you decide on the best way to tell Kim's story?

A: We lived with Kim for her whole life, from birth to 30 years. Of course we are objective, but we can show our love of our daughter this way. From day 1 we were strongly determined that Kim should not be remembered as the crime victim she became; we want her to be remembered as the woman, journalist, daughter, sister, friend, and fiancée that she was.

Q: You've created a fund in Kim's memory--can you say more about that and what impact it's had so far?

A: The Kim Wall Memorial Fund was established less than a month after Kim’s disappearance. Family and friends all over the world are involved in it.

We want other young female journalists to go out in the world and report the stories that Kim can't do any more. That gives us a meaning in this tragedy.

So far we have given out six grants to young journalists from different parts of the world. Their stories make differences for people, in the same way as Kim's stories did. It is a way for us to let Kim's way of working, shoe-leather reporting with a rebellious undercurrent, live on.

A: Most importantly - even in the darkest hour, there is light. Second - don’t give in to hate and revenge, it only comes back to you. You are the loser, the murderer does not care. Our strategy is to not let him take any place in our lives; he has already cost us so much, we won’t give him the pleasure of ruining our lives because of hatred.

It is also important to think of the way you treat people in the situation we were in - don't just avoid them or think you don't have anything to say. You don’t have to say anything, A hug means a lot, it means that you are not alone.

There are no manuals for parents when a son or a daughter gets killed; you have to find your own way over and over again, but you are strong inside and can take more than you think.

A: A book about my grandmother. She was born in 1897 in the countryside, with no electricity. It's fiction with historical events happening in our part of the world.

Grandma lived through two world wars, a Cold War, and lived to see a man on the moon. Grandma was one of those strong women who built the modern welfare society but never got any credit for that. She was the first generation with the right to vote in Sweden.

A: On the website www.rememberingkimwall.com you can find Kim's articles, what her friends have written about her, information about the fund, and much more.

This is a book that never should have been written if life was fair. Kim was a journalist, doing her work, but became a victim of the most terrible crime.