Jessica Pearce Rotondi is the author of the new book What We Inherit: A Secret War and a Family's Search for Answers. It focuses on her family's search to find out what happened to her uncle Jack, who disappeared in Laos during the Vietnam War. Rotondi's work has appeared in a variety of publications, including The History Channel and Time. She lives in Brooklyn.

Q: You write, “To find out what happened to Jack was to find out why we don’t talk about death in the Pearce family, why we cling to hope past its expiration date. I wanted to know Jack so I could understand her [your late mother]." Can you say more about why you decided to write this book?

A: I lost my mother when I was 23 and was desperate for some sort of message from her, a directive about how to live my life without her. The day she died, I found myself staring into her closet. She had been sick for so long, most of her clothes were still hanging in clear sheets of dry cleaner’s plastic.

I remember the odd sensation of the sleeves of her coats clinging to my arms like I’d clung to her hours earlier. When I moved them aside, I found boxes and boxes of letters, declassified CIA documents, and letters about her brother Jack, who went missing during the Vietnam War.

Her obsessive hunt for him spanned almost 40 years and forced me to reexamine a great deal about my childhood and my mother. While she was teaching me to walk, then drive, she was carrying this unresolved grief—and holding onto hope that Jack would still be found.

I was shocked that she could keep such a huge part of her life from me. Finding those newspaper headlines was the bolded message I had been looking for, and I knew instantly that I would do everything in my power to complete her search. 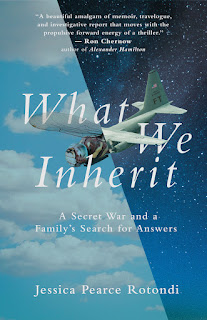 It was finding Mom’s own book a few months later that made me decide to write What We Inherit. I was home for Christmas and uncovered an unpublished children’s book manuscript that Mom had written back in the early ‘90s. She had sent it to exactly one publisher and gotten rejected, so she never sent it anywhere else.

Getting her words published became a personal goal for me and finding that manuscript felt like the permission I needed to put her story out into the world.

Q: The book includes sections that take place in 2013, interspersed with chapters that take place earlier. How did you decide on the book's structure, and did you write it in the order in which it appears?

A: What We Inherit follows three generations of my family as we search for the truth about what happened to my uncle Jack, whose plane disappeared over Laos on March 29, 1972.

I’m a journalist by training and the book was originally a first-person reported narrative, but that all changed when I came across a personal artifact that changed everything: Jack’s dog tags. They slid out from the file I was holding and quite literally fell into my lap.

I knew that they had touched Jack, that my grandfather and mother had held them, and felt in my bones what that experience must have meant to them. I knew then that to tell the story of Jack, I had to tell the story of a father who had been a prisoner of war, then lost a son in another, very different war. I needed to show my mother losing Jack at the same age I lost her.

Throughout the book, I include found objects like Grandpa Ed’s prisoner of war identification card from Stalag 17 and my mother’s passport photo because I want the reader to discover them when the characters do. Their search becomes yours.

I originally wrote the present-day narrative from start to finish, then I wrote my grandfather’s arc. The final, most difficult part was weaving them together and maintaining that suspense. The structure was the most challenging part of this book, but it’s now the element I’m the most excited for readers to experience.

A: This book brought me closer to my mother and grandfather. In some ways, my research into the moments that defined them gave me the chance to “meet” them at my age. I understand more about where I come from and the people who raised me.

I also learned more about Laos and the CIA-led war that left Laos the most heavily bombed country in the world. I’m a contributing editor at The History Channel, and the revelations I uncovered about the war have deeply informed how I approach writing about history. So much of history is left out of history books, and I hope we see even more stories about Laos in the days to come.

A: The title of What We Inherit reflects a major theme of the book: How our family’s past influences who we become. It’s taken from Lord Byron’s poem “Prometheus,” which opens the book:

“…A mighty lesson we inherit:
Thou art a symbol and a sign
To Mortals of their fate and force;
Like thee, Man is in part divine,
A troubled stream from a pure source;
And Man in portions can foresee
His own funereal destiny;
His wretchedness, and his resistance,
And his sad unallied existence:
To which his Spirit may oppose
Itself—and equal to all woes,
And a firm will, and a deep sense,
Which even in torture can descry
Its own concenter'd recompense,
Triumphant where it dares defy…”

Jack was shot down in a plane named “Prometheus” after the Greek Titan who stole fire from the gods to bring to man. In the myth, Zeus punishes Prometheus by strapping him to a stake on Mount Kaukasos as an eagle feeds on his liver—or, according to some accounts, his heart.

But Prometheus can never die; his body regenerates night after night. He’s forced to linger in his suffering, not really living and not quite dead.

For years, Air Force documents about Jack sealed with eagles tormented my grandparents, throwing them wildly from hope to despair. This in-between place of frozen grief was a place my family lived in again after my mother’s cancer diagnosis, essentially repeating the past.

I hope that readers come away from the book inspired to examine how their own families have shaped their narratives but also with the knowledge that we don’t have to be defined by the people who raised us; it’s up to us to take those lessons and decide what to do with them.

A: A novel that I’m excited to reveal more about soon!

A: If you’d like to learn more about What We Inherit or the Secret War in Laos, visit http://www.jessicapearcerotondi.com/.