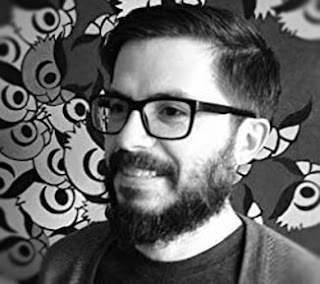 Brian Castleberry is the author of the new novel Nine Shiny Objects. His work has appeared in a variety of publications, including The Southern Review and Day One. He teaches literature and writing at the College of William & Mary, and he lives in Virginia.

Q: How did you come up with the idea for Nine Shiny Objects?

A: The general idea for the book began forming after the 2016 election. I was thinking about how we as a culture came to this place of radical division, and as the following year got going, the trauma of what happened in Charlottesville got me thinking even more about these issues--how at every turn of progress, there's some regression and reaction as well.

I'm very interested in 20th century culture--I mean, in some ways it still feels like my century, though we're 20 years out with all the technological change, etc. And a story arc started to form for me that was about this group of characters who tried to make a better world in the middle of the century, were put down, and then fragmented, their ideas turned in different directions.

So in other words I wanted to tell a big story about something I felt was defining in the American character, in our culture--to use fiction to better understand the world. In a way, the culture fragmented during this same period, and sort of turned away from progress, or pretended its problems with racism and other things were resolved.

Oddly enough, I started to think of UFOs as a way into these themes. Early on they were a source of fantasy for people, but by the 1970s they were wrapped up in paranoia, in conspiracies, in a world of dark secrets. That's sort of what happens in the book. It's not at all a UFO book, but UFOs are sort of an inciting incident. 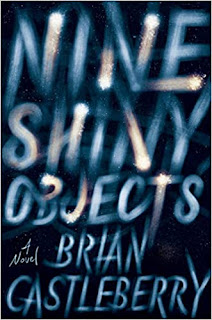 Q: The novel is told in nine chapters, each set five years apart, from 1947 to 1987. How did you decide on the book's structure?

A: I wanted to cover a lot of time and I wanted to show the story from many different angles--to let the reader participate in putting it all together and making sense of the connections; to show that no one individual ever knows the whole story of their lives or time.

I had the "nine shiny objects" from the first newspaper reports of flying saucers in 1947, and had always loved that for a title (in fact I worked on something years ago using that same title, but scrapped it), and it was an easy leap of the imagination to imagine nine chapters with a different character at the helm of each.

Easy to imagine, sure, but then the challenge became making real and believable characters with their own plots for each chapter. One way to make this more doable was to block out the time between events at the same intervals, so that I could basically be "checking in" on this year, and then that year, etc.

Then it was all about discovering each character and how they connect, what they know about the larger story as well as what's at stake for them on the particular day we get to see them.

A: I guess the research for the book took place on different levels and at different times. I'm really into history, so do a lot of general reading about the periods I'm writing about: biographies, old movies, books from the period, historical texts. So some of this research is just all around me all the time, stuff that's on my mind and helped to inspire a character or event.

Then there's more directed research on the particular year, setting, and other things as I'm writing. Thank god for the internet when it comes to this sort of "on the fly" research. Still, sometimes I would get stuck on some detail or other and not be able to move ahead until I figured out an answer.

One of the coolest things that happened during the process is related to the chapter about Debbie Vasquez. For that chapter, I knew I wanted to write about Max Felt's daughter as a teenager, in the 1980s, and I randomly chose Waterbury, Connecticut, for the setting because it's just a pretty town with a nice-sounding name. I knew nothing specific about it.

Here's where we're lucky to be writers with an internet. When I went  looking for videos of what 1980s arcades looked like (I'm old enough to have gone to them but wanted some good imagery to help my imagination), the first video I ran into was about a place called Crazy Eight, in Waterbury, in the ‘80s!

The setting and so much of that chapter just sort of unfolded from there because I could look directly at this place where she would be hanging out with her friends.

Q: The Kirkus Review of the book says, "Memorable characters inhabit a surprising, engaging story of American idealism and its dark opposite." What do you think of that description?

A: I think it's spot-on. I was pleased by that description because in a way it defined what I was aiming for in the beginning. The book is focused on these individual characters in each chapter, but looming over them is a bigger-picture story--and that is exactly that bigger-picture story, of idealism and its dark opposite, always in conflict.

A: I'm cleaning up a collection of stories, but I've also recently discovered how to write an essay. It's funny, I teach essay-writing and nonfiction, but I think I've been afraid to personally try out this alien genre. Now I love it. We'll see where that goes. Maybe there's a nonfiction book somewhere down the line.

As for novels, I'm unsettled. I've been working on several projects back and forth, all of them quite different, waiting for one to really "click" for me.

A: I'm originally from a very small town in Oklahoma, or rather from down a dirt road several miles outside that small town. I was a college dropout and an addict before I even knew I wanted to write. It took me a long time to get to this point in life, with a published book and all that. It's dizzying.

I hope that people who don't come from a place of privilege--who have to fight hard to get to a place where they can write or do whatever thing they really love--will take some energy from my experience. I hope they'll keep at it in spite of what's thrown in their way.