Erica Heller is the editor of the new book One Last Lunch: A Final Meal With Those Who Meant So Much To Us. Her other books include the memoir Yossarian Slept Here, and her work has appeared in a variety of publications, including The New York Observer.

Q: How did you come up with the idea for One Last Lunch?

A: I was missing my mother, who’s been gone about 25 years now. We were very close. I was wishing we could have one more lunch together and I began wondering what it’d be like and could picture it exactly. I knew that we’d eat upstairs at Barney’s, now no more, order chicken salads, giggle and bicker and have a lovely afternoon.

Once I began thinking about that I couldn’t stop thinking about it and it occurred to me that everyone must have someone like that, cherished and gone, who they’d kill to see just one more time.

Q: How did you choose the writers to include, and how did you decide on the order in which their chapters would appear? 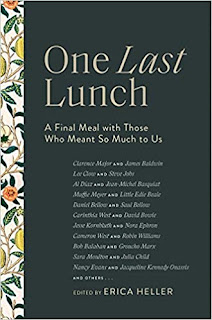 A: Well, to be honest, I never thought I’d be able to get any lunches contributed. Still, I made lists and lists of people who I thought would be fascinating to bring back, but I had no clue about who on earth they’d been close to or who would complete such a task. But really, I wanted lunches with people like Steve Jobs, Jacqueline Kennedy Onassis, Prince, and really, what were the odds?

I woke up every morning and sent out about 100 queries. Sometimes it took talking to 8 or 10 people before I found someone ready, willing, and able. And then there were writers whose work I wanted to showcase, Richard Bausch, Rick Moody, Phyllis Raphael, Kaylie Jones. And sure enough, they each had someone gone from their life who they’d give anything to in order to see again.

Some of the contributors are famous and many of the people they invited back for lunch are too, but not all. I wanted a rounded sampling of all kinds of people, relationships and emotions. Luckily, that’s just what the finished result turned out to be.

Q: You offer two very different versions of your own lunch with your late father, the writer Joseph Heller. Can you say more about that?

A: Of course. We had a very difficult and fractious relationship ever since I was a child. I guess the simple truth is that we didn’t like each other very much. He was frequently cutting, cruel and had no expectations for me whatsoever, which always hurt and enraged me. 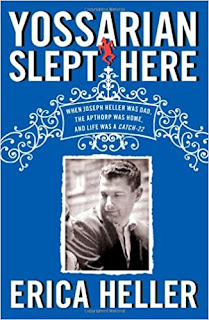 When it came time for me to write my own lunch with him, it was almost impossible to separate the fantasy from the reality, so I realized I would have to do both.

A: Comfort, solace. A sense that with our imagination, we have the power and freedom to bring back anyone, and in that way, spend time with them again.

And the ironic thing is, that in working on these lunches, focusing and concentrating on the people missed and describing the lunches in detail, all the way to the pickles on the table or the ice cream melting in a bowl, these contributors really did get to spend time with their chosen lunch-mates again.

A: I only wish I knew. Kafka wrote that  “A non-writing writer is a monster courting insanity.” He wasn’t wrong.

A: Just that I’m boundlessly grateful to all the contributors who gave me their time and their dedication. For some, this project was painful, for some it was cathartic, for others it was hilarious, and the lunches all reflect that. It was a wonderful collaboration.