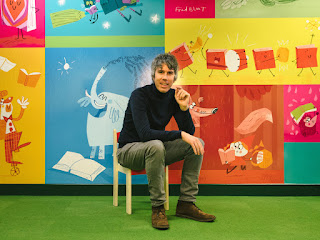 Fred Blunt is the author and illustrator of the new children's picture book Gnome. His other books include Santa Claus vs. the Easter Bunny and Captain Falsebeard in a Very Fishy Tale. He lives in West Wales, UK.

Q: How did you come up with the idea for Gnome?

A: Gnome was based on my 4-year-old boy Sonny’s insistence of saying “NO” to anything you asked him to do… his No phase. We used to call him Dr. No and I knew there was a story there, somewhere. 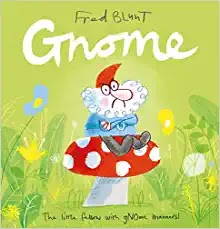 Q: Did you work on the illustrations first or the text first, or both simultaneously?

A: I wrote it on a train journey, pretty much in its entirety. Drawn as a story board and finessed into picture book form later. So simultaneously, I guess.

Q: How did you first get interested in the field of children's book writing and illustrating?

A: I first wrote to a publisher when I was around 8 or 9 years old, I think… with a concept about small tree-dwelling humanoid dragon things, called Smodlings… so you get how long I’ve wanted to do books! 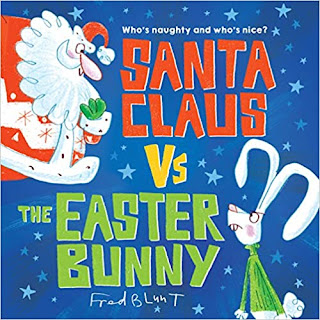 But more seriously, I’ve been illustrating books for around 13 years or so – but I was constantly writing little stories as comics, honing my writing in the hope that I would get the chance to illustrate one of my own stories one day… which happened about 5 years ago, with the publication of Captain Falsebeard, for Puffin. A dream come true.

Q: What do you hope kids take away from Gnome?

A: Ultimately, I hope they are entertained. That’s always my foremost goal when writing. I try to write something that I will find funny, in the hope that children and parents will too. 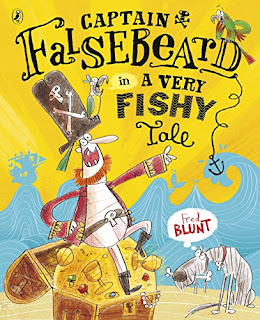 Secondly, there’s the subtle or rather unsubtle message of bad manners get you nowhere and possibly turned to stone by a witch… so, don’t mess with witches, kids!

Oh – and of course it’s an origin story – so perhaps when children see a cute little gnome in a garden, they will know how it came about!

I’m also illustrating an early reader for Simon and Schuster US, called Goat Wants to Eat, written by Laura Gehl, which is again really fun to draw, with a lot of funny antics.

My next self-penned book will be out next year with Oxford University Press, called Lionel the Lonely Monster, which is a gentler, more heart-warming story than I usually do.