Jillian Cantor is the author of the new novel Beautiful Little Fools, which looks at F. Scott Fitzgerald's classic The Great Gatsby from the perspective of the women in the story. Cantor's other books include Half Life. She lives in Arizona.

Q: What inspired you to write a novel from the perspective of the women in The Great Gatsby?

A: I’ve long been a fan of The Great Gatsby, but every time I would reread the novel I’d always feel certain that there was more to the women’s stories.

Part of what I love about the original novel is the choice Fitzgerald made to tell the story from Nick’s point of view. I always thought about how differently the same events may unfold through the eyes of someone closer to the story itself, and from the women’s perspective, too.

Q: What did you see as the right balance between Fitzgerald's novel and your own take on the characters?

A: I very much stuck to the timeline and the backstory events (briefly) set out by Fitzgerald in the original, but I did feel I had leeway in terms of what Daisy and Jordan are thinking and feeling.

Since the original is narrated by Nick, I also felt I could offer my own interpretation of the women’s points of view and how they might see the same events of the book completely differently.

Q: The title comes from something Daisy Buchanan says in The Great Gatsby. Why did you choose it, and what does it signify for you about these characters? 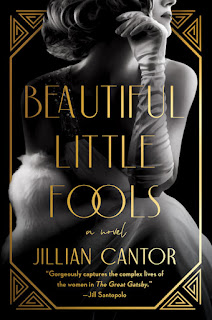 A: Yes, in the original novel Daisy tells her cousin Nick that she was upset when she learned her baby was a girl. She says that the best thing a girl can be is a “beautiful little fool.” It’s always been one of my favorite lines in the novel because I’ve always felt certain that Daisy is not a fool and neither is her friend Jordan.

I knew immediately that this would be my title, before I was even completely sure of the plot itself. All the men write the women off and treat them as possessions, but what we learn as my novel unfolds is that there really is so much more to the women’s stories.

Q: The author Fiona Davis writes of the novel,“Cantor’s shifting kaleidoscope of female perspectives makes Fitzgerald’s classic tale of Jazz-age longing and lust feel utterly modern.” What do you think of that assessment?

A: It’s so kind, and I’m very honored and grateful that Fiona, whose books I absolutely adore, took the time to read my novel early and offer up such wonderful words.

Beautiful Little Fools is definitely a historical novel, but my women, and their shifting perspectives, are, in different forms, thinking about and wanting autonomy, wanting to be in control of their own lives and destinies, and yet we see the men and circumstances and the world continually working against them.

A: I can’t say too much because I’m in the very early stages but it’s another feminist look at a classic.