Haley Neil is the author of the new young adult novel Once More with Chutzpah.

Q: What inspired you to write Once More with Chutzpah, and how did you create your character Tally?

A: Back in 2017, I visited the Western Wall and attended the Jerusalem Pride Parade on the same day. Traditionally, when you go to the Western Wall, you’re supposed to write a prayer to G-d. That prayer is treated like a part of your soul, so much so that when the papers are collected, they’re given a proper Jewish burial.

I wrote mine as a letter and signed it “Love, Haley”. Then I folded it up. I didn’t feel comfortable taking a picture of myself there, but I took one of my letter. I noticed later that the only thing you could see from my prayer was “Love,”. Love comma, love plus, punctuation that seemed to guarantee more.

There were a lot of feelings that day—anger over the gendered sections at such an important holy site, an overwhelming spiritual connection to this place where my family is from, worry that I wasn’t enough in my own identities, hope that things can change. It all felt big and important. It all stayed with me, even after I got home.

And so I wrote.

As for Tally, well, she’s a deeply personal character. I shared so much of my identity in writing her. She has my cultural background, my identity, my anxiety. I wanted to represent the type of character I wished I had seen when I was younger and I wanted her to feel as authentic as possible.

That said, as I got further into the writing, she took on her own layers and her own personality (I sound like such a writer saying that, but it’s exactly how it felt). I’d be working on a scene and I’d just hear her voice, know her next move. One example is that I’m much more extroverted than Tally, so that was something really interesting to play with while I was drafting this book.

I don’t want to get too spoilery, but it was a really fun challenge to show all the ways she’s flawed and messy and figuring it out. At the end of the day, it’s important to remember she’s a teenager. She doesn’t have all the answers. Sometimes she says or thinks things that aren’t exactly true. After all, this is a story about growth. She has to start somewhere.

A: I didn't have a concrete title for a long time. Right around when I was brainstorming what to call my debut, the anthology It’s a Whole Spiel came out. I absolutely loved seeing Yiddish in a YA title. I thought it might be fun to combine a phrase related to something in the book with a term in Yiddish or Hebrew.

So, I turned to Google! I looked up lists of phrases and terms that had to do with everything from travel to musical theater.  On one of those lists, I found the phrase "Once More With Feeling" (which immediately made me think of the classic Buffy musical episode!). I took that phrase and added a Jewish twist!

And yet, I was fairly positive that would never be the real title. I actually tracked down the email where I sent my agent title ideas and I called "Once More with Chutzpah" my "out there" pitch. Part of that had to do with this fear that the title would be seen as too Jewish, too different.

Sometimes the universe brings things together in the strangest of ways. Right around this time, my agent was listening to a podcast that broke down the double meaning of the word "chutzpah" and sent it along to me.

One of the things they discussed was how in America, we often talk about chutzpah as a good thing. If a person has chutzpah, they have the guts or the self-confidence to do something. Yet there's this other side to chutzpah, where it means audacity or gall. Chutzpah can be both bold and brash, good and bad.

That dual nature seemed to fit Tally so perfectly. She has the drive to scheme and plan...whether or not her actions are good is up for debate. I loved the idea of connecting this complicated, sometimes messy main character with a Yiddish word that has a sometimes messy, complicated meaning. 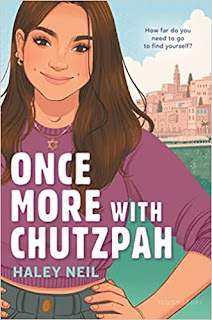 So, Tally's story became Once More with Chutzpah, a nod to her love for musical theater with a Yiddish twist that shows the good, the bad, and the complicated of her coming of age journey.

Q: Before the book was published, it became controversial because of its focus on an American teen trip to Israel. What impact did the controversy, and the experience of writing this book, have on you?

A: When I first started writing, I received a lot of positive support for Once More with Chutzpah in the book community, though antisemitism did exist as an underlying fear.

In speaking with fellow authors covering Jewish themes in their work, or even mentioning Israel, we discussed our fears at how our books might be perceived, including receiving hate from neo-Nazis and antisemitic trolls.

As part of my graduate coursework, I actually interviewed several authors who were worried about writing characters that shared their own background and identity because they felt like they needed to fit a certain standard to succeed in the publishing industry.

Though in my view, there isn’t widespread negative sentiment in the children’s literary community regarding Jewish material in general. In fact, I'm seeing more and more Jewish stories included in diversity efforts—though with the caveat that this is often discussed in reaction to years of Jewish stories not being included in everything from recommendation lists to reviews.

This does get complicated when Israel is thrown into the mix.

I have Israeli family. I wrote about the meaningful experience of visiting the place where my family is from. I was inspired by a pilgrimage to the holiest Jewish site that is still standing today. This in no way means I condone the actions of the Israeli government, but I shouldn’t have to say that.

The best way I can think to explain it to people who aren’t Jewish is that I can tell someone I loved my time studying in London when I was in undergrad without them assuming that I support British colonialism. The two aren’t linked. When someone assumes what is in this book solely because of its setting, that action is inherently antisemitic.

The scariest part of everything that happened was watching members of the book community act like my debut getting attacked online was something I deserved because I was said to have done things or shared sentiments that are, in reality, directly opposed to how I feel. Comments like this book supports genocide. Assumptions about the context and content of my story.

There were also extremely kind members of the community who reached out to check in, offer support, and even do things like flag antisemitic content on Goodreads, so I wouldn't have to see so much hate.

I was in a really hurt place for a while. I couldn't sleep, I was overwhelmed with anxiety. I felt like I was constantly under attack, even in my everyday life.

I was so afraid that this book that I wrote, which is so much about love and growth and acceptance, would never reach an audience because people who had not read it made false accusations about its contents.

Some things that helped: I read that donating to a cause that is directly opposed to what you're facing can help give you a sense of agency, so I donated to Stomp Out Bullying. Friends helped me realize that none of this was really about me as a person, or even about my book—since no one making these painful comments had actually read it—which really helped me feel a lot safer. I started volunteering at my local library, where I now work.

Sometimes I still worry that this won’t reach readers because of what happened. I know there will be people who, even after it’s out, will mock it. But I’ve also had early readers reach out to me and tell me how much it means to them to see themselves represented in this book.

I’m still writing. I’m working on new projects that I’m really excited about and can’t wait to share with readers. I guess what I’m saying is, all of that hate didn’t stop me. I am a real person with real feelings who is going to keep doing the thing I love.

A: It’s okay not to be okay. You are more than enough. You are not alone.

A: Oh gosh, not sure how much I can say about this yet! I have a second YA Contemporary coming out in 2023 that I like to compare to Gilmore Girls (but make it Jewish)! It features an f/f friends to lovers plot line with biromantic/asexual-spectrum ownvoices rep and I’m so so proud of it (or at least I will be once we’re out of edits, haha!).

There isn’t an official synopsis yet, but if you are at all interested in Vermont, wedding planning shenanigans, a perfectionist who doesn’t quite understand the meaning of self care (or her own limits in general), lots of empanadas, and drama over a chuppah, you’re going to be in luck next year!

A: I am so grateful for book bloggers and reviewers like you! Thank you so much for reaching out and I can’t wait for readers to officially meet Tally!