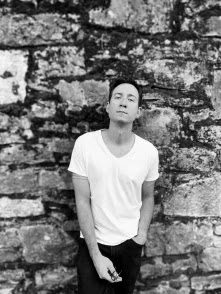 Nathan Elias is the author of the new novel Coil Quake Rift. His other books include the story collection The Reincarnations, and his work has appeared in a variety of publications, including PANK and Entropy. He lives in Nashville, Tennessee.

Q: What inspired you to write Coil Quake Rift, and how did you create your cast of characters?

A: I first started writing Coil Quake Rift in 2017, and its genesis was a compilation of many factors: I’d been living in Los Angeles since 2012 and was fascinated by not only the city’s structure and design but also its allure. By allure I mean that there is an undeniable mystique and appeal to Los Angeles that draws people to it in a continuum.

I love how each different neighborhood is so different: Hollywood, Venice Beach, Santa Monica, Beverly Hills, and many others. While each neighborhood has its own set of defining characteristics, Venice Beach in particular fascinated me; it was a vortex drawing in every different type of person; I remember having this thought while strolling the boardwalk: “There could be a pathway to another dimension behind any one of these doors…”

And so the idea continued to grow on me that Venice Beach was the perfect place for there to exist a nexus, an interdimensional rift at the edge of the world, so to speak.

Another major element that inspired the novel is the fact that California and Los Angeles are prone to natural disasters. Fires, earthquakes, and more.

When you live in such a place, the imminent threat of these disasters can eventually feel paralyzing. You don’t know when disaster will strike, you don’t know if you will be directly affected, and you don’t know if you’ll be able to escape. If the reality of a disaster isn’t bad enough, add on to that elements of confusion, panic, and survival.

Of course, all of the above would not be as imminent without people to experience it. On one hand, the book is a disaster narrative tethered to a narrative about the scientific possibility of alternate realities and black holes. On the other hand, the book’s heart is a domestic story about rifts between people, rifts in relationships, and rifts in shared memories.

The four main characters, Margot, Knox, Jason, and Tiffany, are tangled in a web of love, loss, betrayal, and beginnings. On one hand we have newlyweds Margot and Knox, and on the other hand we have their ex-lovers, Jason and Tiffany, respectively.

Not only do these four characters deal with the loss and gain of one another, but there is also the aspect of Margot discovering at the beginning of the first chapter that she is pregnant. Later, Tiffany reveals that she may also have been pregnant at the time of her life-taking.

This type of pain and loss is already conflict enough to propel a novel forward, but in Coil Quake Rift we have the ever-looming blackout caused by an earthquake, which inevitably puts Los Angeles on lockdown. Nobody is permitted to leave the city.

When all of the characters end up, out of necessity and Tiffany’s design, at Venice Beach, they must descend into a fissure that has opened in the ground and confront alternate realities wherein they have the option to gain what they lost from their primary reality.

Q: Author Alistair McCartney writes of the book, "Coil Quake Rift grapples fearlessly with the inescapable motif of the apocalypse that haunts our century." What do you think of that description?

A: Alistair McCartney’s debut novel is titled The End of the World Book, so I think he is a writer who has thought a lot about the end of the world. With that said, I read his definition of “apocalypse” here in the more general “catastrophic end of things” sense instead of the Biblical sense. 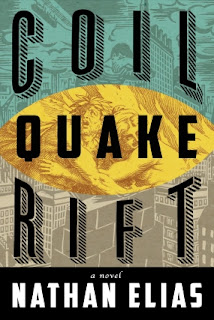 As far as how this looming weight of things ending that “haunts our century,” I believe he’s referring to how Coil Quake Rift is built on not only pre-existing disaster narratives in literature but also how the ever-increasing catalog of disasters in our world, natural or otherwise, contributes to a growing, sometimes straining, awareness of how finite we as humans are.

An underlying theme of Coil Quake Rift is that sense of unpreparedness and fear when disaster strikes, that deeply fragile feeling of “this could be it, this could be the end.”

A: That’s a tough question to answer. Without giving the ending away, I think I always knew the novel would end where it began. You see, one of the novel’s most prevalent symbols is that of the ouroboros–the snake eating its own tail. Of course, this symbol is one of many variations on how the word “Coil” from the title takes its shape. It is only appropriate for the structure of the novel to embody its themes and symbols.

As far as making many changes along the way, well, it took quite a bit of revision for the ending to occur exactly the way it needed to.

Initially, I did not have the epilogue in mind. There was always a prologue, but there was not always an epilogue. That part came organically as a result of hearing back from several editors and was tweaked to perfection during the final stages of developmental edits.

Q: As you’ve mentioned, the novel is set in Los Angeles--how important is setting to you in your writing?

A: Setting is crucial. When I write, I tend to realize that characters, who are certainly integral to the story, must exist somewhere in space and time. What follows is that characters in stories ought to be making choices; the setting, in some way, and at least as far as place is concerned, is tethered to choices made on behalf of the characters.

In Coil Quake Rift, each of the four main characters chose to relocate to Los Angeles before the narrative begins. To echo a key theme in the novel: “Choices make us who we are.”

Another key thing to consider regarding the setting is when the story takes place. Coil Quake Rift is contemporary, set in a time when people rely on cell phones and social media for information.

One of the conflicts in the plot is how unprepared people might be in the face of disaster if cell phones, social media, and electricity are taken away. The characters contend with an impending sense of powerlessness after an earthquake causes a blackout, and they must tap into relatively dormant survival instincts in order to navigate their predicament.

A: I’m currently querying a completed young adult novel, which is drastically different in style and tone than anything I’ve ever written. After this querying phase, I’ll be starting yet another young adult novel, the idea for which I’ve had in my head since early 2019.

A: Coil Quake Rift is built, structurally, upon the theme of rifts. Divisions. Things being split in two. Also, the question of: If a thing is split in two, is it still one thing (but split in two) or is it now two separate things?

One example of this is that the book is split into two parts: “Powerless” and “Descent.” There are four main characters, but the two central protagonists, Margot and Knox, are accompanied in the narrative by their ex-lovers, Jason and Tiffany; there were two couples who split and now there is a new couple.

Rifts also manifest symbolically throughout the story. It might be a subtle symbol, like a line drawn through a pile of cigarette ashes, or it might be as pronounced as a fissure that has split the ground in two. From the book’s structure, themes, characters, plot, imagery, and symbolism, something I strived for while writing this book was to achieve perfect balance and symmetry.