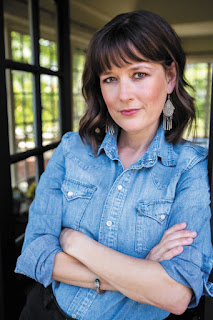 Caroline Frost is the author of the new novel Shadows of Pecan Hollow. A licensed marriage and family therapist, she lives in Pasadena, California.

Q: What inspired you to write Shadows of Pecan Hollow, and how did you create your character Kit?

A: The first incarnation of Kit’s story came to me during a tough time in my relationship, 10 years ago. I had all this anger and hurt and didn’t know quite what to do with it.

I’m not someone who knows how to throw a fit or externalize my anger, so I funneled it all into this screenplay about a woman who was driven to a sort of wildness by the hurt she suffered. I let her act out all the violent, unacceptable urges I was having. I freed her from social expectations and gender norms.

Then I tried to figure out how to bring her back to love, home, and family without making her something she wasn’t.

So many people feel unlovable because they don’t fit in or have these urges or behaviors that push others away. I wanted to make that character, and then make the reader love her. I love Kit. I hope readers do, too. Even if they don’t like her very much, I hope they care about her.

Charlie wasn’t in the first draft. She came later when I realized Kit was so used to being mistreated, what would really undo her was if something happened to her child. Then the story had a whole other parent/child dimension that really moved me.

Having a child gave Kit a chance to be there for someone in ways no one was there for her. It also put her in a position to fail, which she does, many times over. But all parents do, despite our best efforts, don’t we?

Q: How do you see the relationship between your careers as writer and therapist?

A: Curiosity, caring, interest in the bits no one wants to show the world, compassion for suffering, even that which is self-imposed, belief in transformation. The ability to stay quiet for long stretches of time! All of these traits have come in handy in both professions. 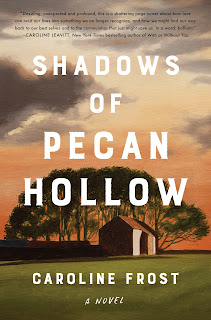 I also love contradictions, making room for vast complexity in one person. I think in literature and in life we get tricked into playing roles that are narrowly defined and that chokes off all the other ways we could be. I feel strongly about the dignity and the beauty of the human experience in all its varied textures.

A: Death is a big part of my story, and I think anyone who has lived in the country and among animals has had much more contact with death than most in the city. There were pleas for more subtlety in the ending from early readers but I largely ignored them. I knew I needed visceral, life-and-death stakes to justify the set-up of Kit’s story.

Q: The novel takes place in East Texas--how important is setting to you in your writing?

A: Essential! I could no sooner write a story disconnected from setting than I could walk around on air. It’s the foundation of story and character. I have always been interested in regional specificity, even within cities. Since this was my first novel, of course I felt very compelled to root it in a setting I knew in my bones.

Shadows of Pecan Hollow is set in a ranching community similar to the one where my father lives. It’s where I lived from ages 1-4 and where my father has lived since 1981. It’s where I got married, and is literally the landscape of my dreams. I think there was a part of me that wanted to introduce people to this place I know so well. In that sense I felt I had to get it right.

A: I am thrilled to be working on my next novel with William Morrow, this one set in the country music scene of Nashville in the late ‘70s.

It shares some commonalities with Pecan Hollow—set in the South, complicated heroine, larger-than-life characters, twisted relationships, a death or two. But the setting will be totally different and so much fun. I’m even playing around with songwriting and might teach myself a little guitar to get the world right.

A: I’m a pretty handy home cook, descended from great cooks and restaurateurs. Before I wrote fiction I was a food writer and wrote an (unpublished) biography of an American cook. Food will always be part of my writing, and I always think about it when I’m reading. What are they eating? How does it taste? Who’s gonna put away the leftovers?!

Also, keep in touch! I love interacting with readers. @carolinefrostwriter on Instagram is the best way.