Dean Jobb is the author of The Case of the Murderous Dr. Cream: The Hunt for a Victorian Era Serial Killer. His other books include Empire of Deception, and his work has appeared in a variety of publications, including Ellery Queen's Mystery Magazine and CrimeReads. He is a journalist and a professor at the University of King's College in Halifax, Nova Scotia.

Q: How did you learn about Dr. Cream, and what inspired you to write this book about him?

A: I’m always on the lookout for compelling, overlooked stories and Dr. Thomas Neill Cream’s sinister tale of madness and murder says so much about its time and place.

It exposes how the sexism, hypocrisy, corruption, and primitive forensic science of the Victorian Era allowed one of history’s earliest and most prolific serial killers to kill, again and again.

And it is a cautionary tale that resonates in our own times, as serial killers continue to prey on people relegated to the margins of society – sex workers, the homeless, transients, addicts, teenage runaways.

Despite DNA evidence, criminal profiling, and other advances in forensic investigation, detectives still struggle to connect seemingly motiveless crimes and random victims to a single murderer.

Q: The writer Charlotte Gray says of the book that it “fuses the blow-by-blow efforts to catch a serial killer with the larger picture of crime and detection in the late nineteenth century.” How did the Cream case fit into the overall picture of the time? You’ve described Scotland Yard’s police work on the case as “bungling.”

A: The investigation also highlights the primitive forensics of the time. Dr. Thomas Stevenson, Britain’s leading forensic toxicologist, conducted the laboratory tests that confirmed the presence of strychnine in the remains of Cream’s victims. 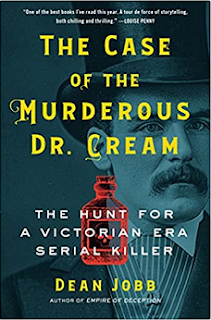 His methods, considered state of the art, were not for the squeamish. He touched samples of fluid recovered from cadavers to his tongue, and claimed to be able to identify an array of poisons by taste.

To confirm the presence of the poison, he injected fluid recovered from Cream’s victims into frogs, to see if their death throes mirrored those of frogs killed with strychnine.

Q: Why is Dr. Cream not as well known today as Jack the Ripper, and why is there speculation that the two were linked?

A: Dr. Cream was notorious in his time – London’s News of the World proclaimed him “the greatest monster of iniquity the century has seen” – but his crimes have faded from memory.

He was eventually caught and punished, so his story has not taken on the macabre afterlife of his infamous contemporary, Jack the Ripper, whose identity has become the subject of endless speculation.

Dr. Cream was, arguably, more lethal and more dangerous. He was a calculating fiend who murdered by stealth, using poison to kill his victims from a distance. He evaded justice in three countries. He preyed on desperate, vulnerable women who turned to him for medical help.

He was a Victorian Era monster and he should no longer be a forgotten figure, lurking in the shadows of history.

I hope my book finally puts to rest the bizarre theory that Cream could have been Jack the Ripper. Prison records confirm he was in an Illinois prison at the time of the Whitechapel murders in 1888.

The earliest reference I could find to Cream’s purported last words on the gallows – “I am Jack . . .,” suggesting he was in the midst of confessing to being the Ripper as the trap door was sprung, [appeared almost a decade after his execution]. It’s fake news, as we say today.

A: My new project for Algonquin Books has the working title Jewels for the Taking: The Jazz Age Heists of a Gentleman Thief. It's the story of one of the world's most successful jewel thieves, who charmed celebrities and hobnobbed with New York’s millionaires as he planned break-ins at their posh Long Island estates.

Arthur Barry was suave and movie-star handsome and his crime wave netted millions of dollars' worth of jewels as he outfoxed the detectives on his trail. Life magazine proclaimed him “the greatest jewel thief who ever lived.”

Imagine The Great Gatsby meets Catch Me If You Can and the hit Netflix series Lupin. It's a rollicking tale of crime and excess set against the backdrop of the Roaring Twenties.