Q&A with Cathy A. Lewis 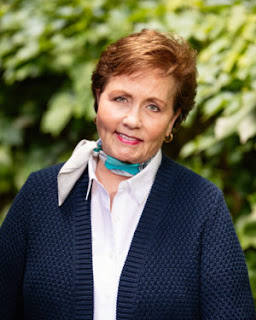 Cathy A. Lewis is the author of the new novel The Road We Took: 4 Days in Germany 1933. Also a professional chef, she lives in Nashville, Tennessee.

Q: Your novel is based partly on your father's experiences in 1933. How did you learn about his journey, and why did you decide to write the book?

A: My novel is based on my dad's experience of his 1933 summer adventure through Europe while on the way to the 4th Boy Scout World Jamboree, held in Godollo, Hungary. My dad possessed a small suitcase filled with artifacts and his daily journal from the trip.

My dad passed in 1995. Since then, I've kept the suitcase in slumber and quiet repose. I had never thoroughly investigated the contents due to my hectic career. In 2018 I had six months off from work to recover from a surgery. I used that time to examine the suitcase.

While reading the journal, I discovered that Dad met an Austrian boy scout, but at the time, a Hitler Youth. They spoke at length. My father wrote about the meeting in his journal, concluding, "I found him to be a fine fellow."

Those eight words were the impetus behind me writing the book because, unknown to my father at the time, 10 years later, he would marry a Jewish immigrant whose extended family was all murdered by the Nazis.

That was a compelling moment for me. I wondered if that "fine fellow" had any part in the murder of my mom's extended family. The Hitler Youth were militarized, ready to become part of the Wehrmacht. I felt compelled by those eight words to write about my feelings and thoughts, and I had a lot to say, which became the starting point for my novel.

Q: What did you see as the right blend between fiction and history as you worked on the novel?

A: The right blend of fiction and history flowed together smoothly. I'm a life-long WWII history buff. During my lifetime, I've read numerous books and watched a large number of movies about WWII.

For two months before I wrote, I completed intensive research on the historical aspects of Europe and Germany between the period of 1925-1945. I educated myself with the details concerning the genesis of the Nazi party, the barracks at Dachau, the city of Munich, Nazi attire, treatment of prisoners, and the overall public atmosphere of Munich and Bremen, Germany, and Vienna, Austria.

I knew enough to understand what truthful aspects could contribute to exceptional storytelling. I could seamlessly blend the details of my dad's trip with fictionized elements of the book. I have an active imagination, which I believe is a necessary element when writing fiction. 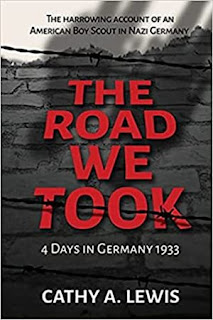 A: I researched the book using online sources and many Jewish historical websites.

I printed scads of articles and combed the Gannett News database for information regarding the World Jamboree. Surprisingly, I found many articles written in the Democrat and Chronicle, my dad's hometown newspaper.

I learned so much through my research. I learned about my mom's relatives and the town where they lived. I learned about the habits and spirit of the Germans during the time Hitler became chancellor in January of 1933. I learned of France and Great Britain's error, not upholding their promise to quickly come to the aid of Poland if an invasion seemed imminent.

I was surprised at how utterly helpless the Jews were against the Nazis’ powerful regime, especially in concentration camps where they outnumbered their captors. I found encouragement in the stories of survivors, how they found an inner strength to keep going, to hang on by sheer will and determination. The aspects of my learning come through in the language of my characters.

A: First and foremost, they would learn from my story what actual fascism looks like and be aware of the signs of a fascist regime. I consider our present-day atmosphere while understanding the controversial aspects of this topic, and it's a slippery slope.

However, the point has to be made that when the big government wants to control every part of their citizens’ lives, take away their freedom of speech, micromanage every industry, control medicine and healthcare, control the educational system, do away with anything contrary to their beliefs or ideology, be it books or religion, control the press in all forms, newspapers, magazines, the arts, music, movies, promote propaganda and lies as truth when a government legislates and dominates every minute detail of citizens’ life--that is what delineates a fascist regime.

It occurs slowly, not all at once, but systematically. The analogy of the frog in the water works here. Put a frog in a pot of cool water. Turn up the temperature nominally, slowly. Before the frog knows it, it's dead in the water.

I'd also like readers to embrace that unseen hope and faith are powerful. How the human spirit is more substantial than many know or think. It is possible to rise above your circumstances and be victorious, and that good can happen.

A: Once my book launch of The Road We Took-4 Days in Germany 1933 is completed, I’ll begin delving into a new project.

The next novel will encompass a different era altogether, beginning in or around 1770. Around the time of 1850, my great-grandfather began researching our ancestral ties to founding father Roger Sherman. Roger Sherman was the only founding father that signed all four of our nation’s most important documents.

I have scads of records, letters, and information to dig through and research. I will weave my historical fiction novel around my findings. I’m very excited about this!

A: I'm grateful for any opportunity to speak about my novel.