Stephen J. Riegel is the author of the new book Finding Judge Crater: A Life and Phenomenal Disappearance in Jazz Age New York. Judge Joseph F. Crater disappeared in 1930. Riegel, a litigator and former federal prosecutor, is based in New York City.

Q: How did you research your new book, and did you learn anything that especially surprised you?

A: Because so little has been written on Joseph Crater and his disappearance, my research was done almost exclusively in primary sources - the New York Police Department files, contemporary newspapers and magazines, court records, archives, personal interviews, and oral histories.

One thing that struck me throughout my work on the book is how radically different from the modern metropolis New York City was during the Roaring Twenties and on the eve of the Great Depression in almost every way - its politics, business, legal practice, culture. This is a major theme of my book. 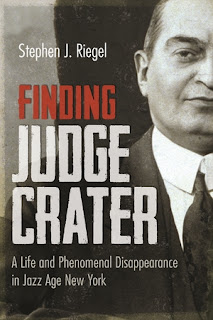 Q: Are there other more recent missing persons cases that compare to this one?

A: In terms of its fame, notoriety, public awareness, and insusceptibility to resolution, the only subsequent, somewhat similar missing persons case is that of Teamsters boss Jimmy Hoffa, which itself is almost 50 years old.

But unlike Hoffa's disappearance, which, it is generally accepted, resulted from his murder by organized crime figures, a plethora of explanations have been posited for Crater's vanishing, and even whether he went missing voluntarily or involuntarily.

A: One clear message of the book is how contemporary politics affected the search for the missing man and how his disappearance in turn influenced those politics.

In fact, there was strong pressure from the Tammany political machine and political leaders not to find out what had happened to the judge for fear of what would be revealed.

Crater's disappearance, in turn, contributed to almost upsetting the plans of Governor Roosevelt, who had appointed him a judge months before, to win the White House in 1932.

A: I have not yet decided on a topic for my second book, but it will certainly involve American history and/or legal matters.