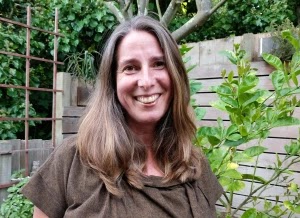 Kim Magowan is the author of the new story collection How Far I've Come. Her other books include the novel The Light Source, and her work has appeared in a variety of publications, and she is the editor in chief and fiction editor for Pithead Chapel. She teaches at Mills College, and she lives in San Francisco.

Q: Over how long a period did you write the stories in How Far I've Come, and how did you choose the order in which they would appear in the collection?

A: My first short story collection, Undoing, came out in early 2018, so almost all of the stories in How Far I’ve Come were written in the last four years, after I put Undoing to bed.

(There are a couple of exceptions, older stories that I didn’t include in Undoing because they felt redundant, in the sense of, “I already have enough angry drinking stories, save this for the next book”).

I always have a Work-in-Progress file into which I throw all my new stories. Once that file gets to be book-size (around 50,000 words), I start curating, deciding which stories are not up to scratch, playing around with the order.

The sequence is so challenging for me, particularly with a collection like this (57 stories). I compare it to curating a museum exhibition, deciding what stories go into which “rooms,” and where they should hang.

I’ve heard writers analogize putting together a story collection to making an album, which sounds accurate to me: the same principles govern both (start strong, have a “tent pole” in the middle that holds up scaffolding, and end strong, with a story that leaves the reader reflecting).

The original ending of the book was “Impulse Control.” But when I first met with my publisher Kyle McCord to discuss the order, he told me that in his opinion, my book was about the oscillation between being afraid and being brave, and he wanted it to end with trying to be brave.

So it was Kyle’s suggestion to move “Women on the Sidelines” to the end, and also to lop off that story’s original final paragraph. I think that was a brilliant move.

A: The original final line of the book, from “Impulse Control,” was “I want to march to Danielle’s office even though my session with her isn’t until Thursday, and brag about how fucking far I’ve come.”

I’m terrible at titles. I’d shown the manuscript to my former ninth grade English teacher, Brian Ford (it’s still hard for me to not call him “Mr. Ford”!), and the title was his suggestion (though he insisted I not use “fucking,” ha).

The title is kind of a joke. Specifically, it refers to the character having just been fired from a job, and Sarah is proud of herself for having maneuvered her boss/ex-lover into firing her, instead of quitting. So it’s hardly an impressive accomplishment, though at least Sarah is avoiding being manipulated again by her boss. 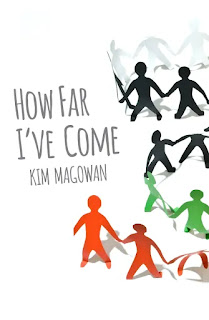 The cover image, with the bendy paper dolls walking around in sinuous twists, is also an indicator that I don’t intend readers to take “How far I’ve come” literally, or as some kind of Roar power ballad. My characters are messy, and so is any progress they make—it’s one step forward, one step back. But at least they’re trying. The title is a nod to their wobbly trajectories.

Q: The author Matt Bell wrote of the book, “I'm enthralled by the deadpan weird found in so many of Kim Magowan's stories, where the strange doesn't so much intrude upon the real but rather insist it is the real.” What do you think of that assessment?

A: Ha, I love that blurb! I mean, you’d have to ask Matt what he had in mind, but when I read his blurb, the story that came to mind is my oddball 100-word story “Madlib.” You have to read that story a couple of times to understand what it is really about. The “real” story is hidden, and it would certainly be possibly to read “Madlib” and not get it.

One quality I love about flash fiction is that it lends itself to experimental forms, because it’s so short. I adore weird forms, but the form has to make sense; it has to serve the story, not just be some clever add-on. It has to be the most perfect way to tell that particular thing.

I am drawn to stories (both as a reader and as a writer) where what’s really going on takes a little parsing, either because the narrator is unreliable and doesn’t fully understand what she’s revealing about herself, or for some other reason.

I love the Emily Dickinson line: “Tell the truth but tell it slant/Success in circuit lies.” A number of my stories aim to tell it slant.

Q: Another author, Sherrie Flick, said the collection “circumnavigates the tense world of fractured relationships.” How do you approach writing about relationships?

A: You know that wonderful Pixar movie Inside Out? It represents personality as formed by individuated core islands (the Friendship Island, The Family Island, The Hockey Island, etc.)? My theory is that writers have “core islands,” and that we have very limited control over the content of our writing; what we control is its form.

Since I began writing as a teenager, I’ve always written about relationships—between lovers, ex-spouses, parents and children, siblings, friends, and enemies. I firmly believe that how we treat other people reveals everything about ourselves, and I find our social behavior endlessly fascinating.

I’m intrigued by contingent relationships, like stepparents, where you’re forced into intimate proximity with someone you didn’t voluntarily choose but are nonetheless stuck with (like those joined paper dolls on the cover).

The first line of Anna Karenina—“All happy families are the same, but every unhappy family is unhappy in its own way”—says much better than I can how I approach those relationships, and why the fractured or damaged ones compel me most.

A: My good friend, the incredibly talented Michelle Ross, and I have finished a co-authored short story collection that we’re currently shopping. I hope it gets picked up soon! It’s been a finalist in a few book contests, so fingers crossed.

I’m also 27,000 words into another short story collection, though I haven’t even started thinking about order, or whether all the stories are up to scratch; I’m at that “dump everything in the WIP file” stage.

Honestly, I don’t know if I will ever try to write a novel again! I love reading novels, but as a writer, I find short stories much easier to tackle. They’re like exquisite little cakes that you can decorate and fuss over; they appeal to the perfectionist in me.