Eva Stachniak is the author of the new historical novel The School of Mirrors. Her other books include The Winter Palace. Born and raised in Poland, she lives in Toronto, Canada.

Q: You note that your characters Marie-Louise and Aunt Margot were inspired by the historical 18th century midwife Madame du Coudray and her niece. How did you learn about them, and what inspired you to write the novel?

A: I didn’t know much about the history of midwifery before realizing that my character, Veronique, pregnant with the King’s child, is in need of a midwife. The year was 1756, the place was the town of Versailles.

This was enough, it turned out, to locate The King’s Midwife, a biography of Madame du Coudray written by a California professor, Nina Gelbart. I read it with bated breath.

French midwifes, I discovered, were among the very best in the world. Their training was rigorous. They were highly regarded, valued, and well compensated for their work.

They never stopped honing their skills, perfecting their methods. They stood up for the welfare of mothers and babies and for their own rights, frequently threatened by the medical establishment.

And Madame du Coudray took it upon herself to spread the art of midwifery beyond Paris and big French cities, into the countryside.

The inspiration for the novel came from my discovery of the existence of Deer Park, a house in the town of Versailles where Louis XV’s servants kept attractive lower-class girls to satisfy their master’s fleeting fancy.

This was at the time when the #MeToo movement was gaining widespread attention, making the fate of Deer Park girls particularly poignant. I could not stop thinking about these girls, young, separated from their families, kept in their gilded cage, misled, and ultimately discarded when they were no longer of use.

Q: What did you see as the right balance of fiction and history as you worked on the book?

A: A historical novel is always a reinterpretation of history, always influenced by the present as much as by our ever-changing knowledge of the past. In The School of Mirrors I stayed as close to known historical facts as I could, but I reimagined and reinterpreted the lives of my characters.

This novel was a bit different than my previous ones where historical figures were at the center of the narrative and I had more historical material at my disposal.

With Catherine the Great, the heroine of The Winter Palace and Empress of the Night, I had access to several excellent biographies, collections of letters, and diaries.

In The School of Mirrors, historical characters—Louis XV, Madame de Pompadour at Versailles, George Danton and his wife Gabrielle in revolutionary Paris—do not take center stage.

The true heroines of the novel, Veronique and  Marie-Louise, are both fictional characters, although based on all I’ve learnt about the lives of the Deer Park girls and Parisian midwives.

A: I began from reading the 18th century memoirs, letters, and police reports of the time. The wealth of material is astounding. Pre-revolutionary France was awash with pamphlets, denunciations, accusations, gossip. Versailles Unveiled, Clergy Unveiled, Police Unveiled are some of the titles hawked on Parisian streets. It is all available, catalogued…all tempting.

Once I had a sense of what the novel would be about, I needed to walk in my character’s footsteps, catch the “flavor” of the places where they lived, verify the details of landscapes, weather, note the local colour. Maps and photographs are never enough, and a research trip always leaves me with many telling details I couldn’t have imagined.

Versailles was an essential part of this research trip. Not just the palace and the gardens but the Town of Versailles where a lot the novel takes place and where I was able to place Deer Park, the house where Veronique and other young girls were kept, waiting for the summons of the mysterious “Polish count, the cousin to the queen.”

In the Palace of Versailles I observed details my characters would have noticed, not just the splendid interiors, but the shape of the marble steps, the positioning of the service doors, the feel of banisters, the tiny nooks meant for servants. The palace has, of course, undergone many changes, but it was still possible to get a sense of being there during the reign of Louis XV.

I also spent quite a bit of time wandering through the palace grounds and what used to be servants’ quarters, noting details my characters may have noticed.

In the Versailles gardens, I peeked behind wooden lattice fences which wall off greenery from the manicured paths, for this is where Marie-Louise would have hidden and romped in her lonely childhood. 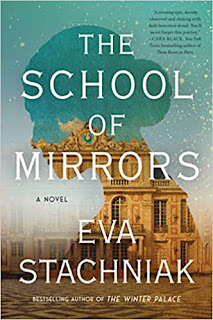 I noted a fountain depicting sculptures of splashing children Marie-Louise would have noticed and other images which allowed me to picture her life there with vivid details I could not have imagined.

In Paris the most important was a visit to the Conciergerie where so many artifacts of the Revolution are preserved and/or recreated. It fleshed out the days of the Terror and provided the necessary details for several crucial scenes which take place in a French revolutionary prison.

The Parisian Museum of the Police with its spectacular exhibition on the history of French law enforcement, was a great source of the 18th century documents and images—street proclamations, IDs, ration cards, permissions, police reports—essential for me as I imagined the everyday lives of my characters before and during the French Revolution.

The Museum of the French Revolution in Vizille was another great source of documents, paintings, images of the street life, ordinary household objects, all priceless in the process of rooting my characters in a very specific time and place.

This was especially important during the French Revolution when each stage meant a drastic change of imagery and rhetoric. Dinner plates depicting Louis XV as a patriot who has allowed much needed reforms, were soon replaced by Louis the villain, accused of treachery, denounced, tried, and executed.

All these changes were “imprinted” in the decorations of everyday objects: porcelain cups and mugs, jewelry, tapestry, street drawings, posters.

A visit to the Museum of Flaubert and the History of Medicine in Rouen was also of great importance. This is where I saw the only surviving “Machine,” Madame du Coudray’s obstetric mannequin which plays such a significant role in the novel.

I found it very moving to stand in front of the Machine, which has been instrumental in empowering generations of young peasant girls. Completing Madame du Coudray training turned them into licensed midwifes, respected and powerful members of their communities capable of saving the lives of countless mothers and babies.

Looking at this faded and well-used educational tool I imagined Madame du Coudray at Versailles, demonstrating her invention before Louis XV and Madame de Pompadour.

The museum also imprinted on me the pain of illegitimate children and their mothers. One of the exhibits reconstructed the trap entrance of an orphanage where a mother could place a swaddled baby, ring the bell, and “vanish.”

Beside it, the museum curators placed thick ledgers opened on the pages registering these acts of desperation and hope: notes the mothers left with their babies. Pieces of fabric, half of a playing card with hearts on it, a drawing of a bleeding heart.

A: The parallels between the fate of the Deer Park girls of whom I read in 18th century pamphlets and books and the revelations following the scrutiny of Jeffrey Epstein and his team of enablers.

The grooming of the vulnerable and impressionable victims, the support and the silence of the accomplices, the damage sexual exploitation at such a young age leaves in its wake.

The more it changes, as the French saying goes, the more things remain the same.

A: I discover my novels as I write so I did not know the ending when I began to write. The novel grew and expanded and took its shape slowly. Each stage came as a discovery. Oh, so this is what happened to Veronique…this is how Marie-Louise met her husband, this is what her son did.

Each discovery enriched the novel, sent me on a different path. Sometimes I had to backtrack, cut what did not ultimately belong to the story. So yes, many changes, many detours, until finally everything fell into place, and I knew I got it right.

A: I’m still in the 18th century. A woman who captured my imagination this time is a wife of a trickster, cult leader, and natural healer.

He is Giuseppe Balsamo, better known as Count Cagliostro, a flamboyant 18th century figure who traversed Europe for over 20 years. She is Seraphina Balsamo, or Countess Cagliostro. He has taken her on his romp through Europe. She has become his disciple and his victim, until she ultimately revolted against his powerful grip on her.

I am still getting to know her, still figuring out what story do I want to tell, which of the many strands are important.

A: Even though the writing of The School of Mirrors was completed in 2018, I did my final editing in the first months of the pandemic when I felt locked, isolated, and scared. There were no vaccines yet, not enough solid data to know what is truly dangerous and in what way.

At this trying time, I re-read and fine-tuned my novel with a deep sense of how much more I share with my characters than I anticipated when life seemed orderly and calm.

I thought of Veronique locked at Deer Park in an illusory world of opulence, unaware of the great price she would have to pay for her splendid isolation in the future. I thought of Marie-Louise who lived through the French Revolution, through its angry, charged, deeply divided politicized days, weeks, and months. The time of accusations and frenzied rhetoric oblivious to nuance.

I reflected on the unpredictability and precariousness of our fragile lives. On how everything we take for granted can be upended and threatened in an instant.

All these thoughts made the final edits much more poignant, resonant, enriched by what was happening around me.