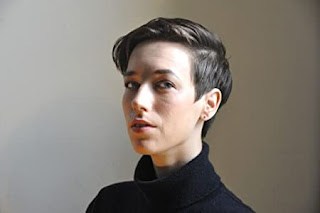 Lara Elena Donnelly is the author of the new novel Base Notes. She also has written the novel The Amberlough Dossier, and her work has appeared in a variety of publications, including Strange Horizons and Escape Pod. She has taught at Sarah Lawrence College and the Catapult Workshop in New York.

Q: What inspired you to write Base Notes, and how did you first become interested in scents?

A: Base Notes started out as a short story called “The Dirty American” written for an anthology themed around the color orange.

I had just read Jude Doyle's article "My quest to find the great American perfume" in The Guardian and was stuck on this idea of Americans really disliking the dirtier scents in a perfumer's arsenal--the animalics, the really funky stuff. Doyle cited orange blossom as one of the favorite ingredients of American perfumes, because they smelled so clean.

The winding road that led me to that article began some time in 2013—I was working on my debut novel, Amberlough, a pseudo-1930s fantasy full of glamour and wealth and sex and betrayal. Everybody wore scent—vetiver, ambergris, attar of roses. But in real life, I didn’t. So I thought maybe I should try.

Black Phoenix Alchemy Lab was my gateway, as I’m sure it is for many nerds. Then came Imaginary Authors. Once I moved to New York I learned you could get free samples from Twisted Lily (RIP). And once I started writing Base Notes, I joined the Dry Down Slack community and started swapping scents with other people. Full bottles began to enter the equation.

And now my perfume collection (and my partner’s) takes up half a shelf on the bedroom bookcase that we frankly desperately need for books.

Fiction led me to perfume, and perfume led my back to fiction. I expect they’ll remain entwined moving forward. Scent is such an evocative physical sensation, it’s a really useful tool in writing.

Q: How did you create your character Vic Fowler?

A: Sitting in a booth in a Pittsburgh diner in August 2015, halfway through moving from Louisville to New York, I scribbled the first notes for the short story that would eventually become Base Notes. Vic is just referred to as "the MC."

I mostly came up with Vic as a way to talk about Jonathan Bright, Vic's mysterious ex-lover in Base Notes, and the voice flowed very naturally for me. I can't think of another short story I've ever written so easily. It was so satisfying.

Then Vic took a bit of a back seat to various other projects. But the back seat is still very much in the car, and Vic, while content to ride in silence for a while, did eventually start backseat driving.

Going through my notebooks, there are a lot of proto-Base Notes scribblings scattered throughout 2018, and you can see the characters and plot beginning to accrete.

Then, late December 2018, I started a new notebook, and the first thing I did on the very first page was draw Vic Fowler, name scrawled under the portrait, and beside it the words, "Spite is Powerful." And from then on, I think Vic was pretty established as a character. 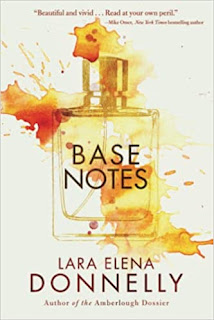 A: I did do a lot of research, though I’m not sure I did nearly enough—it never feels like enough. And I definitely rudely abused the truth in many cases, twisting it to fit the needs of the novel. Apologies to all the marvelous, knowledgeable, intelligent people who helped me, from perfumers to pathologists.

FragBros were something I encountered that did not make it into the book, but they were definitely a surprise. Toxic masculinity can ruin anything, I guess.

FragBros (short for Fragrance Bros) are hard to explain. There’s a lot of tight clothes and hair gel and protestations of heterosexuality. This community is (as I understand it) where the idea of “beast mode” perfumes originated—sexy scents you can wear to get a lady, or impress other dudes, and generally sort of…overpower a room with your odor.

Perhaps counterintuitively, these fragrances aren’t the clean aquatics or leathery musks people might jump to when you say “masculine scent.” They’re…really floral, spicy, sweet, often rose-heavy. Chris Rusak has actually done a lovely interrogation of the concept with his own Beast Mode (https://shop.chrisrusak.com/products/beast-mode), which I have a sampler of and really love.

Q: What are your favorite scents?

A: Perfume-wise, I love the dusty, naughty The Cobra and the Canary by Imaginary Authors, and Nasomatto's Nudiflorum, which reminds me of cinnamon ribbon candy.

Mandy Aftel's Cuir de Gardenia is impossibly sexy, with all the plump, oily sweetness of gardenia soaked into sweaty saddlery and the sharp scent of a feral animal.

Papillon's Dryad sparked a really intense scent memory that had me texting my mom asking about a perfume she had on her vanity when I was very little, which turned out to be Dali by Salvador Dali. They have the same really green, spicy smell, though Dryad is much softer and subtler, to me. Dali has an edge to it.

My favorite things to smell in the wild? Rain on hot cement. Moldy leaves. Cut grass. But who doesn’t love those? Honestly, one of my favorite smells is the warm, damp air coming out of laundry vents. It smells like cotton, lint, detergent, the hot metal of the dryer, just a little mildew. It's such a comforting scent, I want to wrap up and lie down in it.

I also love the smell of my cat--I stick my nose in her belly and smell her a lot, which she hates. She smells like a fox fur coat, leathery and musky and a little sour. This cat-sniffing exercise usually ends in tears, sneezing, and regret, as I usually get cat hair in my eyes or up my nose. Sometimes she yawns in my face, which is an intensely malodourous experience I would not recommend to anyone.

A: My next project is another New York book--I have promised my agent I won't do another one after this, not for a while.

But so many of the things that fascinate me are really concentrated here: luxury, society, backstabbing to attain and retain the aforementioned. Art and culture and the people who make it happen struggling to get by. Glamor, grit, aesthetic, struggle, risk-taking, contradiction, obscene wealth, vast influence, vicious gossip, excellent food.

Basically, the next project is, at its core, more of the same things that made up The Amberlough Dossier and Base Notes.

Specifically, though, the next book is a loose retelling of Tam Lin, a Scottish ballad from the 1500-1600s in which a young maiden meets a handsome knight who is going to be sacrificed to the devil by the fairy court, and endeavors to save him from that fate.

Except in this case, the maiden is an underemployed, overeducated millennial, the knight is a corporate darling on the fast track to disastrous burnout, the fairy court is their toxic workplace, and the devil is acquiring the company in a complicated merger. Kind of.

There's a lot of plausible deniability around any supernatural things that might or might not happen; rather than have readers make a one-to-one comparison, I want the spectre of Tam Lin to kind of haunt the narrative and add some menace and magic to it.

Someone does get eaten by a spa, though. No hauntings or plausible deniability about it.

A: I really hope that people think Base Notes is as funny as I do. Obviously, it's quite grim--class struggle, the hustle, serial murder--but I honestly think it's got some really good laughs peppered throughout.

It’s also been really fascinating to see how people react, or fail to react, to the way that the book plays with gender. Now that it’s being released out into the world, hopefully to a broader readership, I’ll be interested to see what that broader readership infers or glosses over as they read.

Last but not least: tip well. It’s tough out there!