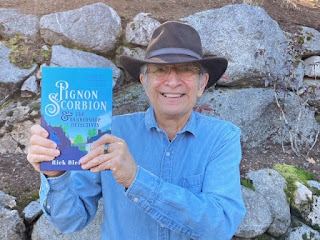 Q: What inspired you to create your character Pignon Scorbion?

A: I have read and loved mystery and crime stories since I was very young.

I have also been a dedicated viewer of television detectives/characters such as Columbo, Matlock, Rockford, Monk, and many others in a similar vein.

What they all had in common was a lighter style, humor, and a quirkiness of both the main characters and their associates. And in many cases, they had unusual names that readers remembered because of their uniqueness.

Q: The novel is set in 1910 in England--did you need to do any research to write the book, and if so, did you learn anything that especially surprised you?

A: I had to do a massive amount of research, much more than I would have ever imagined when I first started writing the book. I wanted readers to be transported back to that time and place and have the feeling that this book and the events it details could have actually occurred.

I knew that to make the story believable, authentic, and accurate, it was the minutiae that I had to get correct. Everything in the story had to be appropriate to the place and time of 1910 countryside England.

I have been to England on a number of occasions, and therefore had some familiarity with the country and its people, but I still needed to research virtually everything to make sure it rang, and was, true for both Britain and the year 1910.

That included the language and slang that was spoken, names that were popular at the time, what the small towns of that era looked like, what businesses flourished in those hamlets, what clothes people wore, and real-life events that were taking place in both England and the world in that year.

I had to research what lighting was used in stores and homes, the jobs people were engaged in, the state of communication and transportation, what books, songs, and paintings were popular, and so many more things that I had not anticipated having to know – but absolutely did have to incorporate to have the story feel realistic.

Also, since the book incorporates scenes set in the old American West and in a circus, and has a character who speaks French words and phrases, I had to research all of that as well.

One of the most surprising things I learned was related to the Old West segment in which a local tribe of indigenous Americans and pioneer settlers are at odds with each other.

What I didn’t know, but learned, was that some tribes had permanent stationary encampments while others lived in temporary ones and moved from location to location. The tribe that was in my story fell into that latter category.

In addition to the research, quite a few people (Brits, Native Americans, French speakers, and others) did sensitivity and accuracy reads once the book was written and they contributed to its correctness and accuracy.

Q: The author Reed Farrel Coleman wrote, "Bleiweiss's novel is a worthy addition in the tradition of Conan Doyle and Christie." What do you think of those comparisons?

A: What can I say other than I love them! Reed isn’t the only author or reviewer who has made that comparison, as endorsements by best-selling and award-winning authors Andrews & Wilson, Pamela Binnings Ewen, Amanda Flower, Natasha Boyd, Dick Lochte, James Wade, and Edwin Battistella also likened Scorbion to Christie/Poirot and Doyle/Holmes.

I didn’t purposefully set out to write a piece that would feel similar to those authors and characters, but when the idea popped into my head with the first Scorbion storyline, it came replete with the location and era – probably because I love Poirot and Holmes so much. 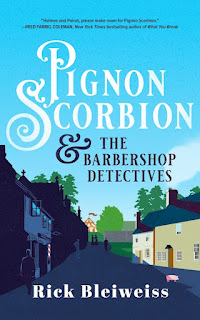 So, I started to create a “universe” in which Scorbion existed with them and wrote the story in the cadence and language of that era. I found that I was very comfortable writing in that style, and it just flowed out of me.

I expanded what was originally a short story into the full novel at the urging of the members of a writing group of which I was a member.

In the process of doing that, I fleshed out the character of Scorbion, who was similar to Holmes and Poirot in that, like them, he was deductive, observational, quirky, chose to use brains over brawn and was a brilliant crime-solver.

However, at the same time, he was quite dissimilar from either, being handsome, athletic, dandy-like in his attire, engaged in relationships with women, and more collegial, in that he solved his cases with the assistance of barbers, a shoeshine man, a young reporter, and a female bookshop owner in the milieu of a barbershop (as well as in other ways).

It is my belief that the comparisons to Poirot and Holmes stem not just from Scorbion, but also from my choice of writing in the same style of Christie and Doyle with colorful characters, interesting mysteries, having little blood or gore, and using the language of the era.

A: I did not plot the book in advance. What came to me was the first story about the fortune seeker, and it just appeared in my mind one day.

Fortunately, I was sitting at my computer when it did, and I started frenetically trying to type what I was seeing play out in my brain. And it stayed like that for the writing of the entire book. My job was to capture for a reader what I saw (like a movie) in my head.

As the story/book unfolded it took on a life of its own and the characters became my “friends” and dictated where the story was going.

I believe that no matter the art – writing, songwriting, painting, sculpting, etc. – inspiration often just appears to the creator of the piece, and they can’t explain why. It just happens, and that is exactly what occurred with Pignon Scorbion.

However, once I had written the entire book, I went back over it from start to finish many times, adding clues and red herrings, fine-tuning passages and chapters, enhancing descriptions of people and places, and defining the characters to an even greater degree than they were.

I also had the assistance of my agents, the members of my writing group, a few friends, and some very good editors who made suggestions after reading the early versions of the manuscript. They all enhanced it – and made me a better writer in the process.

I also have a piece in a short story anthology Hotel California that publishes in May 2022, and am honored to be among a group of fabulous authors who also have stories in the collection, including Heather Graham, Reed Farrel Coleman, Amanda Flower, Jennifer Dornbush, Don Bruns, John Gilstrap, and Andrew Child, who has contributed a newly-written Jack Reacher story.

My tale is set in contemporary times and involves a New York hitman who has a hit put out on his life, escapes to Maui and engages in a cat-and-mouse game with the hitman sent to finish him off. The follow up to that book will be called Thriller, and I’ve already written a story for that book, and am starting on a story for the third anthology in the series, Back In Black.

Lastly, I’m rewriting a science fiction rock opera that a friend and I originally created a number of years ago, and I’m getting started on a third Scorbion book in the series. Hopefully, people will enjoy the first and second Scorbion books enough to warrant a third.

First, since the Pignon Scorbion book is a fun throwback to old classic whodunits, with challenging mysteries, humor, colorful characters and no blood or gore, I hope people who read it are entertained by it. The book can transport them back to a simpler, less stressful era and help them forget about the angst in our current society and world while they read it.

Secondly, as I am 77 years old and Scorbion is my first published novel, I hope I can be an example and inspiration to other seniors that you are never too old to pursue your dreams and try something new. I have chased the pot of gold at the end of the rainbow my entire life, and always found the chase to be as much fun as finding the gold. And I’m not about to stop chasing rainbows now.

Third, Blackstone Publishing and I have launched the book with a campaign that is more like one that would be used for a major motion picture versus a book.

Our marketing campaign is a trans-media, disruptive approach, and includes not only the book but a Pignon Scorbion hidden objects video game app that is available on the Apple & Google Play app stores, a Scorbion theme song that I wrote and recorded which is used in the audiobook and the video trailer, the video book trailer, t-shirts and dog t-shirts and other branded Scorbion merchandise that will be coming, custom graphics, an author logo, and a podcast series of author interviews that I host called Rick Bleiweiss’ Chapter & Verse.

And lastly, while I appreciate the sales that the book industry realizes through Amazon, Barnes & Noble, big box stores and other corporate and on-line booksellers, I am a big believer in the importance of libraries and local independent bookstores and support them wholeheartedly.

Part of how I’m supporting them is by posting a page on my website, Rickbleiweiss.com, that lists over 1,300 independent bookstores across the United States with their contact information.