Yossi Alpher is the author of the new book Death Tango: Ariel Sharon, Yasser Arafat, and Three Fateful Days in March. His other books include No End of Conflict. A consultant and writer on Middle East strategic issues, he lives in Israel.

Q: What inspired you to write Death Tango?

A: The events described in the book took place 20 years ago: a devastating Palestinian suicide bombing, Israel’s retaliation, and Arab League approval of a Middle East peace initiative, all in three days in late March 2002.

I recall at the time being struck by the tight juxtaposition of dramatic acts of war and gestures of peace. But it took the passage of time before I concluded that this was a strategic turning point for Israel-Arab and Israeli-Palestinian relations.

Eventually, around a decade ago, I put those events on the list of Israel-related strategic topics I wanted to write about. But first there were more urgent topics, like the ones I addressed in Winners and Losers in the ‘Arab Spring:’ Profiles in Chaos, which was published in 2020.

On the other hand, by the time I began researching and interviewing for Death Tango, I realized I had to hurry before too many of the key Israeli, Palestinian, other Arab and American actors from 2002 passed from the scene. Of course, Ariel Sharon and Yasser Arafat were both long gone by 2020. But I had known them both and could rely on recollections as well as interviews with those close to them.

Q: What do you see as the impact of the three days you write about, and why did this period become a turning point in the Middle East?

A: In retrospect, I concluded that Israel’s invasion and reoccupation of the West Bank, two days after the Passover eve Park Hotel suicide bombing that killed 30 Israelis, effectively ended the security-related aspects of the Oslo peace process between Israelis and Palestinians.

By the same token, seen 20 years later, the Arab Peace Initiative ratified by the Arab League in Beirut the day after the Park Hotel bombing, has ever since displayed amazing staying power on the regional diplomatic scene.

It was ostensibly intended to incentivize Israel to reach agreement with the Palestinians, but ended up providing cover for Arab countries to normalize relations with Israel regardless of Palestinian demands.

The end result of the events of those three days is a dead Israeli-Palestinian peace process and a very live dynamic of Israel-Arab peace-oriented interaction.

Of course, the threat posed by militant Islam has also weighed in on this process. But it already existed in March 2002: witness the leader of Hamas, Sheikh Ahmed Yassin, claiming on the night of the Park Hotel bombing that it was intended precisely to prevent Arab League ratification of the Arab Peace Initiative. 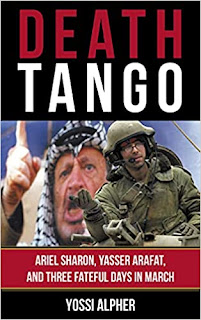 Then I interviewed as many of the principal actors from 2002 that I could get access to. This involved traveling to Ramallah in the West Bank and Amman in Jordan as well as Moscow and Washington. I traveled as far as Dartmouth College in New Hampshire. And of course, many of the principals were nearby in Israel, where I live.

As the Covid-19 pandemic closed in, final interviews moved to Zoom and the internet.

All told, I learned some surprising things, which are revealed in Death Tango.

Here is Ariel Sharon, hawkish builder of West Bank and Gaza settlements whose ferocious reputation for fighting Arabs earned him “Genghis Khan” status in the Arab world, trying through secret channels to solicit an invitation to the Beirut Arab League summit of March 28, 2002.

And here is U.S. President George W. Bush going through the motions of sponsoring a Middle East peace “Roadmap” while energetically planning the 2003 invasion of Iraq and encountering the barely-concealed skepticism of both Sharon and Arafat.

Q: What do you see looking ahead when it comes to Middle East dynamics?

A: Predicting the future in the Middle East is a treacherous enterprise. I’ll stick with the conclusions of Death Tango even though, by publication date in February 2022, they are half a year old.

Israel and the Palestinians will continue down a slippery slope toward evolving into a violent, conflicted binational entity. Both embarked on this destructive dynamic when Palestinian Second Intifada suicide bombings led Israel to reoccupy the West Bank in March 2002, thereby effectively ending any sort of constructive process toward a two-state solution.

The Arab world at large will prove increasingly indifferent to the fate of the Palestinians as it normalizes relations with Israel.

The Iranian threat--Islamist, military, nuclear--will hover over the entire region.

The United States, preoccupied with China as well as the threat of domestic disruption, will continue to withdraw, at least militarily, from the Greater Middle East region.

A: I’m putting finishing touches on a “faction” novel about Israeli-Palestinian interaction at the civil society level. Like Death Tango’s concluding assessment, it is pessimistic about Israelis and Palestinians. And because it’s a novel, I allow myself to be cynical.

A: I’m entering my 80th year. I look back on a long career in the Mossad, in academic research and writing on strategic issues, and in internet dialoguing with Palestinians and other Arabs as well as Turks and Iranians (the now defunct bitterlemons family of internet publications).

A lot of what I learned and observed has found expression in the writing career that I began in earnest around a decade ago.

I’m writing to leave a record for anyone who is interested--my grandchildren included.