Maud Casey is the author of the new novel City of Incurable Women, which focuses on 19th century women institutionalized as hysterics in Paris. Casey's other books include The Art of Mystery, and her work has appeared in a variety of publications, including The New York Times Book Review and Salon. She teaches at the University of Maryland, and she lives in Washington, D.C.

Q: What inspired you to write City of Incurable Women?

The longer, less cryptic, and less annoyingly coy answer is I read The Invention of Hysteria by Georges Didi-Huberman for a class in college, which included photographs of the girls and women diagnosed with hysteria in the 19th century by Jean-Martin Charcot at the Salpêtrière hospital in Paris.

These photographs stayed with me for decades. They were staged, these photographs alleged to illustrate the various stages of hysteria, a diagnosis that alleged to describe the alleged problem of the female body. A lot of alleging going on. It was an era when, in certain medical circles, it was believed illness was written on the body.

The photographs begged a billion different questions. What had led the girls and women to this moment in their lives? What was happening in their lives beyond the frame? I didn’t think I would find answers, but I knew these were questions I wanted to think about, that I could think about for years.

I have been reading Nathalie Léger’s book The White Dress, part of her triptych about women artists (they are hybrid creations—fiction, nonfiction, who knows—my favorite kind of book these days). In it, she describes the way Belarusian writer Svetlana Alexievich has said about her books that they are not histories of war but histories of feeling.

Though I definitely couldn’t have articulated that when I started writing, this is what inspired me to write City of Incurable Women. I wanted to write a history of feeling that might run alongside the so-called facts of this corner of the history of psychiatry.

Q: The Publishers Weekly review of the book says, in part, “The work, unshackled from traditional elements such as plot, characters, or earned endings, alternately reads like a prose poem, a fever dream, and a compendium of primary sources.” What do you think of that description, and how did you come up with the structure for the book?

A: I love this description! I am a slow writer. I have to let myself crash around a lot, and for a long time, before I arrive, well, anywhere.

This book owes a great deal to conversations I had with the photographer Laura Larson (https://www.lauralarson.net/). For many years, we worked collaboratively, exchanging ideas and photographs and stories, reading books together that used both image and text (among them Nicholas Muellner’s Amnesia Pavillions, Theresa Cha’s Dictée, Sebald’s The Rings of Saturn, John Berger’s essays, Paisley Rekdal’s Intimate).

We visited archives—there is a cache of original glass photographic plates from the Salpêtrière at Harvard’s Countway Medical Library). Eventually, our collaboration became two separate books. Her own City of Incurable Women, a collection of her original photographs and writing, is forthcoming from the wonderful St. Lucy’s Press.

The structure of this book emerged, in part, from that collaboration and also from conversations with other friends (it takes a village) who helped me think through, among other things, how I might incorporate the primary sources.

I wanted to include pages of the case studies and other medical documents in order to provide historical context for the reader, but I didn’t want to overemphasize it or, you know, give it top billing. I also didn’t want to reproduce a pruriently voyeuristic situation in which my book became another way to exploit these women. 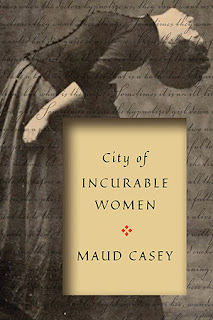 What I settled on was including my own rough translations and imaginative interpretations of case studies and other medical documents created by the doctors at the Salpêtrière. My hope was to create the illusion that these pages have been torn from a medical compendium. Bellevue helped me realize that; they did a beautiful job with the design.

One of the things I especially love about PW’s description is that I wanted to write a book that is ever-shifting in perspective, that moves the reader around in relation to point of view.

Then, too, out of this unsettling, upsetting material, I wanted to emphasize my own effort to connect with these women, which is, of course, impossible, as well as their mystery and the way their lives were more than their case histories. Their lives, like any life, were composed of inimitable, fleeting moments.

In other words, history knows some stuff about them and then there is all the stuff history doesn’t know. The book I’ve written doesn’t claim to know, but I hope it points to those fleeting, inimitable moments.

Q: Did you learn anything that especially surprised you in your research?

A: The thing that surprised me the most was also part of what set me in motion when I first read Didi-Huberman’s book.

In order for the medical photographer to take photographs of these women in the various stages of hysteria with the technology available at the time, it required changing the glass plates between each photograph. This meant the women had to hold a particular pose while the plate was being changed.

Inside that handful of seconds are so many questions that are impossible to get to the bottom of, to do with the collaborative nature of the  photographs, with what the women’s participation meant or didn’t mean. Those sorts of questions without one answer, or even any answer—this is why I write, for the strange pleasure of thinking about them for years.

Q: What do you see as the legacy of these women today?

A: It’s a great question and a big one, one that maybe still is unfolding. A lot of writers have been drawn to this material—Asti Hustvedt’s Medical Muses, which was a guide and a resource for me, among them. There’s something there that speaks to the current moment.

The stories of these girls (I always want to emphasize that since many arrived at the Salpêtrière at the age of 14) and women, offer so much in the way of historical context for the ways women’s bodies have been, and continue to be pathologized, and for the way that 19th century notion of illness being written on the body lives on in various insidious forms.

I think, too, though, my answer to this question is I don’t know. The balance I always find myself striking when writing about historical figures is knowing enough and then, as the saying goes, knowing what I don’t know, which, turns out, is a lot. Fortunately for me, that not knowing is part of the engine for fiction, or at least the fiction I love, the fiction I want to write.

A: I am crashing around again, slowly figuring it out. I wrote a little piece inspired by some archival research related to St. Elizabeths Hospital in Washington, D.C., which appeared in the anthology Running Flying Floating Crawling (https://www.saintlucybooks.com/shop/p/h3oaar1buto624t0seccpuujbq0eef-4sg38-rhsxx), put out by St. Lucy’s Press. So I’m still drawn to psychiatric history.

And then I have been reading books like Etel Adnan’s Shifting the Silence, and the triptych I mentioned earlier by Nathalie Léger, books that are hard to categorize, that digress and wander.

I am a slow thinker. What I know is, eventually, I will arrive somewhere. That I have the luxury to think slowly in relation to my writing, because of my teaching job, which includes conversations with students and colleagues that keep me afloat as a writer, well, I’m very, very lucky.