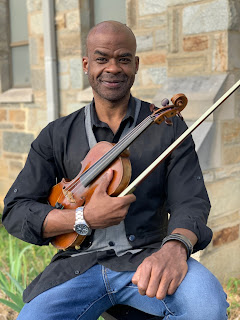 Brendan Slocumb is the author of the new novel The Violin Conspiracy. A violinist, he is a music educator and has performed with orchestras in Northern Virginia, Maryland, and Washington, D.C. He has said that "the tragic events of 2020 made it seem like this was a moment when I could tell my stories, and that people would actually listen to me, acknowledge my experiences, and not deny that my perspective was as valid as theirs."

Q: In your author's note, you write, "Even after almost forty years of playing violin, I am still confronted with conscious and unconscious discrimination." How much did your own experiences with racism affect your description of the prejudice directed at Ray?

A: Several of the experiences in the story come from my own life - like my violin being stolen my senior year of high school, the Baton Rouge encounter, and the college performances. I’ve experienced many incidents of discrimination, which I reworked into the novel.

One example is the wedding scene, where the protagonist, Ray, isn’t allowed to play at the ceremony because of the color of his skin. A similar event actually happened to me.

The trick, though, was to figure out how to use my experience to tell Ray’s story…

A: One of the aspects of writing a novel that I like the most is the element of surprise and connection. When I began the book, I plotted out the entire narrative, breaking it into three acts. 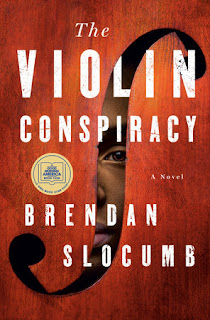 Act 1 (the introductory material) and Act 2 (most of the action) I’d sorted out pretty well. Act 3 was much sketchier, because I figured a lot would depend on what happened in Acts 1 and 2. So I always had an idea of how and where the novel would be going.

This often meant going back and revising the original scenario to make it fit the new angle, but the basic connection and outline were already in place. It was, truthfully, such a high to feel like I was tapping into my subconscious, assembling pieces that I hadn’t realized were even pieces.

First and most important, I hope they just enjoy the ride - I know I did. This story of perseverance, courage, and the power of what music can do for you is one that I have wanted to tell for a very long time.

Second, I wanted to let people know that classical music - like all music - can be appreciated by everyone. It’s a vehicle of expression that can literally take you to unknown, extraordinary, wonderful places - regardless of your race, social status, gender, and so forth. But there’s so much work to be done - so that people of all races and backgrounds can appreciate classical music.

Which brings me to the third point - hoping that this novel will illuminate the struggles that people of color often have in the classical music world. Only 1.8 percent of classical symphony musicians are Black. Why? It’s certainly not because we are incapable. I want to pull the curtain back on a subject most people never think about to expose the inequities of this field.

A: Right now I’m calling the book “The Composer’s Last Score,” and it’s about a music historian who discovers that the greatest 20th century composer has a very dark secret. The composer’s family will stop at nothing to silence him.

My third book is going to be a murder mystery with a twist that I guarantee you’ll never see coming.

A: Only how very grateful I am to all the people - especially those at Anchor Books - who’ve believed in me enough to allow me to tell my story.