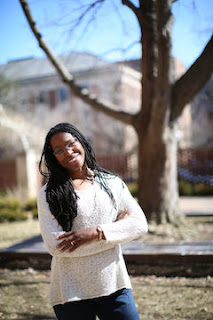 Tiya Miles is the author of All That She Carried: The Journey of Ashley's Sack, A Black Family Keepsake, the winner of the 2021 National Book Award for nonfiction. The book, which focuses on the history and significance of a Black family artifact, is now available in paperback. Miles's other books include The Dawn of Detroit. She is professor of history and Radcliffe Alumnae Professor at the Radcliffe Institute for Advanced Study and director of the Charles Warren Center for Studies in American History at Harvard University. She lives in Cambridge, Massachusetts.

Q: You write of Ashley's Sack, “Like no other artifact in African American material culture, this story cloth captures the emotional texture of Black women’s lives during and after slavery and reveals the staying power of love across time--past, present, and unfolding.” Can you describe your feelings upon first viewing the cloth? At what point did you decide to write a book about it?

A: When I first saw Ashley’s Sack, the emotional force of the searing words stitched onto the antique fabric seized immediate hold of me. I could not breathe as I read those lines and began to feel the full impact of the story they told.

The sack was simultaneously beautiful and mournful, in many ways a reflection of the shared human experience. It was impossible to turn away from such a gripping symbol of life and love, of what it means to face hardship and nevertheless persevere.

A: The title was a collaborative effort! I knew that I wanted the title to point to the women who packed and passed down the sack in addition to the sack itself. I also wanted to use the pronoun “she” in an ambiguous and flexible way so that readers could interpret it as referring to any of the women profiled in the book and/or the sack itself. 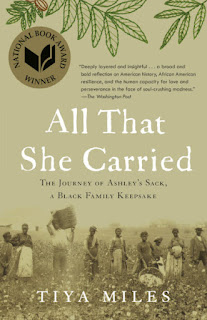 Originally, I was playing with the title “The Things She Carried” in intentional reference to the famous Vietnam War reflection by Tim O’Brien, The Things They Carried, and with an implied connection being made between war and slavery.

My editor, Molly Turpin, thought that title would be confusing to people because it was so close to O’Brien’s, so she proposed “All That She Carried.” I thought this substitute perfect, even better than the original concept, so I got to work on developing a subtitle that conveyed key ideas in the book.

Q: In a New York Times review of the book, Jennifer Szalai writes, “Miles tries to learn and reconstruct what she can, taking care to respect the silences in the historical record while also refusing to abandon Ashley and Rose to ‘that discursive abyss.’” How did you research the book, and did you learn anything unexpected from your research?

A: I researched the book painstakingly and with the help of experienced genealogists in both Charleston (Jesse Nelson) and at the Smithsonian National Museum of African American History and Culture (Hannah Scruggs). As always, I relied on the goodwill and expertise of numerous librarians and archivists, mostly in South Carolina.

I realized early on that I would have to cast quite a wide net to gather the materials necessary to do this story justice. That realization inspired me to incorporate writing (memoir, fiction, poetry) by many African American women of the past and present to lend context, depth, and insight to my interpretation of Ashley’s Sack and the women who carried it.

My research confirmed what some African American family historians refer to as the “wall” of slavery that complicates and often inhibits the tracing of Black family lines back to the generations before emancipation. This was not unexpected. The multitude of other pathways I ultimately found into this history and experience did surprise me.

Q: What do you hope readers take away from the story of Rose, her daughter Ashley, and Ashley's granddaughter Ruth?

A: I hope readers will take away a compelling sense of the great historical triumph of Black family love – and of Black women’s creative resistance -- despite systems, ideologies, and circumstances that threatened to destroy both.

I also hope readers will leave their time with All That She Carried sharing my view that the remarkable story of perseverance wrapped up in this cotton sack can be a model for us in this current chaotic environmental and political moment.

A: I am working on several projects that have utterly captured my attention, including a brief environmental history of American girlhood, a creative biography of Harriet Tubman, and a dual biography of the abolitionist authors Harriet Jacobs and Harriet Beecher Stowe.