Q: How did you come up with the idea for Anonymous Sex, and for the concept of having the stories presented anonymously in the book?

Jordan: One night over dinner and a bottle of wine at a bistro, Cheryl and I discovered that we’re both fans of erotica, when it’s beautifully written, and wishing there were more of it.

Then it struck us: why not create it ourselves, and ask some of the world’s best writers to come along on the journey with us? The challenge would be getting these brilliant, award-winning authors to say yes, especially the ones who’d never written explicitly about sex in their work.


That’s when we hit on the idea of making the stories anonymous, which would free them to write about whatever they wished.

Our first invitation was to Julia Glass, who was the reason we were sitting at that table—she'd introduced us several years before at the Brooklyn Book Festival. Her “yes” was instant and came with an exclamation point! From there we built our wish lists and started writing letters. Almost everyone, even the writers who said no, was intrigued by the idea.

But how could we persuade writers who didn’t really go there in their usual fiction? And that’s when we came up with the idea of making the stories anonymous.

Q: The writer David Ebershoff said of the book, “An anthology in the form of a parlor game, Anonymous Sex invites readers into the imaginations of some our best novelists, letting us marvel at their talents and desires while wondering who wrote what and if it even matters.” What do you think of that description? Do you think who wrote which story matters in the end?

Jordan: I love that David said that, about if it even matters. It shouldn’t, in my view. As fiction writers, it's our job to slip our skins and enter the lives of other people. If we do that respectfully and convincingly, I think we should be able to write about anything and everything.

With Anonymous Sex, readers won’t know whether the writer is male or female, old or young, straight or queer or trans. Their only basis for judgment will be the merits of each story, and that’s as it should be.

Tan: I love this concept and agree with David Ebershoff’s take completely. I think it’s a precious and rare thing that we’re offering here right now -- readers coming to this book can read, completely blind, a short story by a writer without bringing any biases into it.

This book, I believe, offers a reader the purest reading experience -- you’re going to either love (or loathe) a story simply because of the words on the page, and not because you had liked or disliked that writer’s previous work or agree or disagree with their politics.

Q: How did the two of you collaborate on the book, and how did you decide on the authors to include?

Jordan: We were 12 hours apart on two different continents at the beginning of this, so there was a lot of emailing back and forth, and some wrangling as well. But we had a shared desire to make the collection as inclusive as possible by every measure: gender, age, ethnicity, sexual preference, and nationality. And we agreed on every author before we invited them.

We’re incredibly proud of our list. Our contributors include winners of the Pulitzer Prize, Orange/Women’s Prize, the PEN Awards, the Edgar Awards, and more. They showed us an enormous amount of trust by entering into this venture with us, and we couldn’t be more honored, or more thrilled with the results.

Tan: First, we spoke to our agents, who were both encouraging. So once that happened we came up with a plan. We were very methodical about this -- the first person we invited was Julia Glass, who had introduced us at the Brooklyn Book Festival years ago, was a good friend and also because we both have loved her work for years. Over Facetime, she said “Yes” instantly!

From there, we built out our roster, each of us creating our own wish list and then gradually writing letters to people we both agreed on from those lists.

When Hillary and I began this, we did this over a very long distance -- I was in lockdown in Singapore at the time, living in my childhood bedroom at my mother’s home (for what turned out to be four months), while Hillary was in Maine at first, then New York City. Our Facetime chats about these letters -- challenging at times to share a glass of wine together given our 12-hour time difference but we did try that once or twice! -- truly kept us going in that tough time. 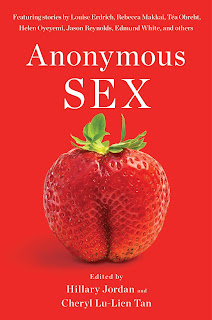 What was unforgettable and incredibly buoying at the time was that the responses of the writers we invited -- we received some very enthusiastic and immediate “Yes”es and even with the many “No”s, we got the loveliest notes that sometimes led to memorable exchanges about writing and life as we were all living it in that moment, whether it was Singapore, New York, Edinburgh, or Los Angeles.

Jordan: We’re sexual beings; this is a fundamental part of our humanity. Anonymous Sex is a celebration of sexuality in all its diversity, and it’s coming out a time when we've been physically severed from each other, both by Covid and by technology. I hope it serves as a reminder of the necessity and beauty—and fun!—of intimate human connection.

Tan: To our knowledge, no one has ever published an anthology quite like this. Our contributors include winners of the Pulitzer Prize, the National Book Award, the PEN Awards, the Orange/Women’s Prize, the Edgar Award, the Carnegie Medal, the Giller Prize, and more.

I love that it explores sex across the spectrum -- as we’d expected from such a gifted and disparate group of writers, the stories are all over the map. There’s queer and straight sex, real and imagined sex, holographic and ghost sex. There’s youthful sex, married sex, and senior sex—and one story that manages to cover all three bases.

There are stories of sexual obsession and sexual love. Stories of domination and submission, power and surrender. There’s revenge sex and sex with strangers; sex as rebellion and sex as holy. There’s unrequited sex, funny sex, tortured sex, and tender sex.

There’s sex all over the world—Hong Kong, Nigeria, France, India, Australia, the U.S. There’s past sex, present-day sex, future sex, and even sex in the afterlife.

Also, we’re thrilled to present work that some of our writers never may have done before this -- 2020 Carnegie Medal-winner Jason Reynolds, for example, is known to the world for his children’s and young adult books. Edgar Award-winning mystery writer S.J. Rozan had never written erotica before. It’s such a pleasure to be offering these stories and more to readers.

Jordan: My next novel and two screenplays.

Tan: I’m currently working on my next novel.