Peter Desberg and Jeffrey Davis are the authors of the new book Pitch Like Hollywood: What You Can Learn from the High-Stakes Film Industry. They also have co-written the book Now That's Funny!. Desberg is a licensed clinical psychologist and Davis is a professor of film and TV writing at Loyola Marymount University in Los Angeles.

Q: What inspired you both to write this book?

A: In our 2017 book Now That’s Funny! we interviewed many of Hollywood’s legendary comedy writers. We created a generic comedy premise, and watched as they developed it in real time. Along the way they told us stories about pitching. Their stories were so good they inspired us to write a book about how people pitch in Hollywood.

While we were doing our research for this book, Peter came across a Harvard journal article about the largest study ever done on pitching. The researchers said they were going to study the process in the most difficult arena to pitch…the entertainment industry.

That confirmed what we were already thinking. Pitching is pitching. The basic principles are the same wherever it’s done, but…Hollywood has developed an effective method for pitching over its scant 100 years.

It occurred to us that the world of business could profit by learning to adapt this method. We wrote about what Hollywood adds when a project is pitched. A great story well told. We also added two essential areas missing in other books: the psychology of persuasion and how to manage stage fright.

Q: What are some of the most important ways that Hollywood-style pitches can be used in other fields?

A: Most business pitches are weighted down by statistics and PowerPoint presentations but don’t have a story to tell.

Picture a great storyteller at a party holding the guests spellbound…people are devouring every word. Now switch your focus to someone in a room with recessed lighting, standing to the side of a large screen, reading bullet points to their audience. These kinds of pitches should be labeled, “Do not listen while operating heavy machinery.”

Two pitches can present the same information, but one can be a dry recitation and the other, using the same data, can draw you in so you’ll want to hear what comes next. Any cognitive psychologist can tell you that stories make information memorable. The way people pitch in Hollywood maximizes curiosity and plays to emotions.

When we read a great script, we refer to it as a page-turner. A Hollywood pitch moves people to care by creating characters and conflict giving its listeners a sense of how to solve a problem, while holding back the ending making them want to know more. It heightens curiosity before it finally reveals its message. This is what Hollywood pitching techniques will add to pitches in other fields. 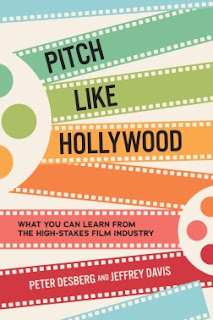 Q: What would you advise someone who's nervous about pitching their idea?

A: Pitch Like Hollywood has four chapters dealing with ways to manage anxiety while pitching. Here’s one of the key facets we hope you’ll find useful, how to practice your pitch.

The key is to practice as close to performance conditions as possible. One effective way to do this is to gather a group of people you can practice pitching with. Select the type of people who are like the people you’ll be pitching to. During your practice, have them ask you the types of questions you might receive during your pitch. Include some skeptical and hostile questions to help make you bulletproof. At the end of each session, discuss the results and use the critique to help you craft your presentation.

Practice under distracting conditions. During the time you’re practicing, have people call you on your cellphone at random times. Arrange to have someone walk in during your pitch and give someone a message. You can even have someone walk out while you’re pitching and return a few minutes later. If you know that you’ll be standing, practice that way. If you’ll be using a computer, practice with it. If you’ll be wearing a suit and tie, practice while wearing them for a day or two before your pitch.

After you’ve practiced a few times and are starting to feel comfortable, take a video giving your pitch. Review it to identify all your rough patches. If you faltered on responding to questions, practice fixing that. If you found yourself drifting into a monotone voice, practice modulating. If you were too stiff and wooden, work on gesturing. If you let place fillers like “you know” or “well…” creep into your pitch, practice eliminating them.

When you think you’ve got your pitch down, run in place until you’re getting out of breath. Then give your pitch. This will simulate the conditions of pitching during a panic attack. If you can learn to continue while struggling to breathe, you’ll be able to pitch under any condition.

Q: How did the two of you collaborate on the book?

A: We’re fortunate to have complementary skills. Once we had a rough outline, Peter worked on the first draft. Jeffrey, who finds first drafts more painful than root canal, took the second. We worked this way, passing each chapter back and forth until we believed we had created the voice of the book.

By combining our disparate backgrounds, we were able to feature more than one point of view. With each draft we worked to weave the Hollywood pitching process throughout the book. We were guided by the Hollywood maxim, “Show don’t tell.”

A: Pitch Like Hollywood was a passion project. We believe it will help develop skills essential to anyone who has generated ideas they hope to implement. We’re also looking for a good way to autograph Kindle copies of the book and are open to suggestions.