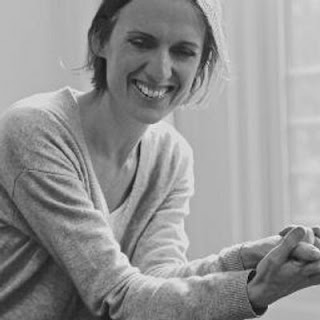 Rebecca Mead is the author of the new book Home/Land: A Memoir of Departure and Return. Her other books include My Life in Middlemarch. She is a staff writer for The New Yorker, and she lives in London.

Q: What inspired you to write Home/Land?

A: Moving from New York to London at the time of life I did—in my early 50s—was such a momentous thing to do, and I wanted to capture that experience while it was still fresh—the emotions and sensations that were sure to be evanescent.

I was born in London, but only spent the first three years of my life there before my family moved to the seaside on the south coast. I moved to New York at 21 and spent almost all of the next 30 years there—my whole adult life.

When I returned to the UK, London was both familiar and very alien and foreign to me. I noticed little things, like the way that the sound of your footfall on the sidewalk in Brooklyn is different from the sound of the pavement in the UK.

When I first got back to the UK, walking the streets brought back these forgotten sense memories, of sound, of scent, of climate. It was a strange and uncanny experience and one that I thought was worth exploring.

Q: You write, “A sense of displacement is so constitutional to my own being that I seem to have been compelled to make it my son’s inheritance. I have given him this questionable gift: a lost place to long for.” Can you say more about this?

A: Growing up in the seaside town where I spent my childhood, I always knew I was going to leave town: to go to college, to get a job, to have a life of my own. Longing for elsewhere—for London, where I had been born, or for somewhere further afield, like New York, where I ended up—was absolutely central to my sense of myself.

My son’s origins are very different: he was born in New York City, a place that a lot of people, not just New Yorkers, think of as the center of the world. I was aware that it is very easy, if you come from a place like New York, to be provincial—to think that nowhere else matters as much as where you are from.

I wanted to show my son that there are other ways of being, other centers of gravity, beyond the comforts and privileges of brownstone Brooklyn, where he spent the first 13 years of his life. But the consequence of that is that I have displaced him from the only home he’d ever known and arranged things so that he has had to find his way in a new country. I’ve given him a place to long to return to—if he decides he wants to.

Q: How did you choose the book’s title, and what does home, or land, or homeland signify for you? And a second part of this question: The Kirkus Review of the book calls it “A contemplative memoir about one writer’s return to a homeland that no longer feels like home.” What do you think of that description?

A: The title came to me very intuitively. I was interested in the charged idea of homeland—a word that has been very politicized in the US, especially since 2001. The book is not explicitly very political, though it is written against the backdrop of the events of 2016 and onward, and I hope that the atmosphere of that context is palpable to the reader. 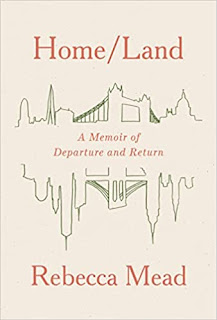 The book is about the idea of home: what is a home? Is it where you are from, or where you decide to settle? And the book is also concerned with land, in the most material sense: moving to the unreliable clay upon which London is built from the granite of New York City became a metaphor for me for my experience of unsteadiness and displacement.

I also became fascinated with the layers of history that are so evident in London: from my own family’s history here, a century or so ago, to the ancient history of a figure like Boudica, whose tomb was traditionally believed—wrongly it turns out—to be a short walk from my house.

The Kirkus Review was nicely phrased, so I’ll take it! The idea of where is home for me moves constantly. When I left New York, I persuaded myself that I wasn’t really leaving—that I’d be back all the time.

Then the pandemic happened, and I couldn’t go back to Brooklyn for more than two years. I wrote the book during that time and was very wistful for all that I had given up—while also knowing that the Brooklyn I lived in and loved was going through its own crisis. The life I had had wouldn’t have been there for me to lead, even if I had stayed.

As for being at home in London—I’ve been gone so long from England that I feel like an outsider, and even though London is the city of my birth, I don’t feel like a Londoner. Fortunately, either through personality or through habit, I have always thrived on not quite feeling at home wherever I am. I guess I am at home with that feeling of being out of place—I find it strangely reassuring.

Q: Why did you leave the United States, and do you think you’ll ever move back?

A: I write in the book that when people ask me that, I say, “It was time for a change,” because a fuller answer is so very complicated. There were practical reasons: if my son didn’t change from one school system to another at that point then it would be too late for him ever to change, for example.

But the immediate impulse was the result of the 2016 election. My first reaction was that the world was rocked on its foundations, but at least I had my home. But as time passed, and more things unfolded in the States that I couldn’t abide, I began to fear more about what the country was becoming and about my son’s future in it. I felt like, if we didn’t make a change, change could be forced upon us in ways that were not of our choosing.

London was the obvious place to go, because the UK is where I am from—but I also saw it as a place from which I could more easily springboard to other places beyond it. It was exciting and revitalizing to think about upending my life in my early 50s, even though there is also a huge cost to it, in terms of leaving friends and family behind, and having to start anew.

Q: So do you think you’d ever move back, or is this where you’ll be?

A: I don’t think any place is where I’ll be forever! I never intended to return to the UK, but for all that I don’t think I imagined staying in the US forever, either. I don’t know where I will go next, if I am lucky enough to have more life to go anywhere.

I did become an American citizen, though, and I am very glad that I did. I was in the US for so long, and the country gave me so much; I very much feel that I am divided between the two countries, and that my identity is both British and American.

Q: Are you thinking about another book?

A: Not quite yet—I’m a very slow gestator of books. It takes me a very long time. And I have a very demanding and wonderful job!