Nicholas Reynolds is the author of the book Writer, Sailor, Soldier, Spy: Ernest Hemingway's Secret Adventures, 1935-1961. His other books include U.S. Marines in Iraq, 2003: Basrah, Baghdad and Beyond. He has served in the U.S. Marine Corps and the CIA, and was the historian for the CIA Museum.

Q: What inspired you to write Writer, Sailor, Soldier, Spy, and how did you learn about Hemingway's experiences in espionage?

A: I am not sure “inspired” is the right word for my Hemingway journey. Here’s why. I learned about the story more or less by accident when I was researching the OSS, America’s World War II intelligence agency. OSS mostly fought the Germans in Europe; both Hemingway and his son were literally on the front lines with OSS.

Near the end of my research, I looked at Spies, a book published by Yale University Press in 2009. It contained the well-documented claim that Hemingway had also had a relationship with Soviet intelligence during World War II.

This was a bombshell! If accurate, how did it mesh with the huge body of work on Hemingway’s life? He was, after all, the quintessential American male in so many ways. Were we now to believe that he was also a fellow-traveller or communist sympathizer of some sort? Was he a traitor?

A lifelong Hemingway fan, I needed to know the answers and started to dig without knowing exactly what I would find. So maybe the right word is “carried away” or “consumed with curiosity” rather than “inspired.”

Q: What do you think attracted Hemingway to the world of espionage, and how did he get involved with the Soviet Union?

A: The simple answer is the Spanish Civil War. In 1937 he went to cover the war from the Republican (loyalist/left-of-center) side and fell in love with the cause.

For him — and many other writers — it seemed just the right cause: the legitimate, democratically-elected government that was defending itself from brutal, reactionary forces that wanted to turn the clock back from 1930 to 1830.

Among the forces supporting the Republic were the Soviets. Though their methods was ruthless and brutal, he believed that in this case the ends justified the means. Along the way he embraced the Soviets — and spying — in an early display of radical chic.

Q: How did his spying activities coexist with his writing? 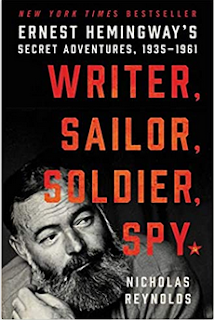 A: This is really a key question. In two works, Hemingway touches on the issues.

One is his largely — and, understandably, forgotten — play, The Fifth Column, which seems to embrace rough counterintelligence work as a necessary evil — something that the Republic has to do to defend itself.

More balanced is the treatment of the war in his great war novel For Whom the Bell Tolls, where explores both sides’ faults. He touches on the ends/means debate, and talks about getting used to lying in a good cause.

He does not, however, directly address whether a writer dedicated to telling the truth about the harsh realities of the 20th century should immerse himself in espionage, which means hiding an important part of his life, and never coming clean about his activities, even at the end of his life.

This winds up costing him psychic energy as he frets about being uncovered by the FBI. Keeping secrets demands energy that could be put to other uses.

A: There are many ways to answer this question. Hemingway has always been so many things to so many people.

One approach is to say that while he agreed to spy for the Soviets, what matters is not what he did or did not do. He gave them almost no useful information, and he did not betray his country.

Instead, what matters is the cost of his secret adventures -- how much it added to the burdens that he was carrying at the end of his life. The FBI did not hound Hemingway to death -- as some have suggested -- but he did fret obsessively that they were about to come for him.

My argument is that his relationship with the Soviets contributed to that obsession, something that is often overlooked.

A: I’m writing a book on the origins of American intelligence in World War II. Hemingway plays a small role in what is mostly a coming-of-age story.

A: I wondered how my Hemingway work would be received by professional Hemingway scholars and aficionados, especially those who come together in the Hemingway Society. It was a great pleasure to find a warm welcome, especially but not only for my book and my ideas.

Membership in the Society combines scholarship and friendship — plus its meetings are remarkable events in places that Hemingway frequented: Paris, Venice, Michigan, Chicago.

One the best things that Hemingway left us is a body of work and a life story that stimulate us intellectually and call for us to live as fully as we can.