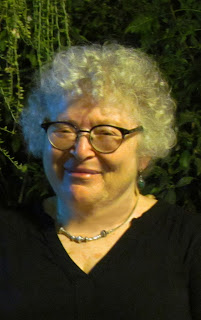 Daniella Weiss Ashkenazy is the author of the new book Playing Detective with Family Lore.  She is a journalist based in Israel.

Q: What inspired you to write this book, and how do you think your family story fits into the overall story of Jewish immigration to the United States?

A: It didn’t start off as a book – certainly not one that would be relevant for anyone but kith and kin. To be honest, although I’m a well-published journalist, even writing a memoir wasn’t on my radar. It began as a promise.

Too many people who wanted to speak at my father’s funeral…so, I promised everyone I’d put together a modest memorial booklet where anyone who wanted to could have a say. A few dozen pages, no big deal.

However, this “project” took on a life of its own. Almost two decades later, the published work has metamorphized into something else. Not just the length.

The irony is, during most of these years when the book was taking shape (albeit in fits and stops) I wasn’t aware I was writing for anyone beyond my extended family, until I began adding historical context and details to dovetail my kin’s life experiences on the personal level.

My immigrant grandparents came from a tiny, poverty-stricken shtetl called Radekhiv in Galicia, but also from the prosperous and famous market town Jaroslaw, which is also in Poland.

Parallel to this, I discovered my other set of grandparents left the Russian port city Nikolayev, situated just inside the Pale of Settlement, following the pogroms of 1905, and left Jassy as a result of two decades of unique antisemitic legislation that followed Romanian independence.

As a composite, I suddenly realized my family’s experiences and the paths their lives took contained a shared legacy: They encapsulate the triumphs and tragedies of Jewish life in Eastern Europe and in America.

That makes Playing Detective relevant for the 80 percent of American Jews who trace their roots back to Eastern Europe. It is their story, as well.

This “epiphany” is reflected in the secondary title I tagged on to Playing Detective with Family Lore: How plugging the holes in a family history unintentionally came to tell the saga of Jews in a microcosm.

Q: How much did you know about your family history as you were growing up?

A: Not much. Neither my grandparents nor my parents and my generation had any great interest in family history. This is very commonplace. I think it is a “generational thing”…by that, I mean Americans of our vintage were riveted on becoming or being Americans and everything that entailed for the future. Not dwelling on our family’s past.

Secondly, you ask about my “growing up” years: Interest in one’s family history is often age-driven. If it germinates this comes late on, because through midlife we’re focused on ourselves. We have more pressing priorities and pleasures than spending the wee hours of the night rummaging through online archives and reading historical tracts.

All we knew was where my grandparents were born in Europe…and some fragmented family anecdotes told to children with a limited attention span, such as my grandmother repeating the story how “on the boat to America, I went up and asked the passengers in First Class for oranges for my seasick sisters in steerage.”

After retirement my father did, however, track down distant American relatives to construct a family tree. Some names on the schematic allowed me to flesh out details of the lives of key individuals in the family saga.

What I “initially knew” came much later than my “growing up years.” In oral family lore hiding in a series of audiotapes I made between 2000-2009 with my mom (at the time, in her mid-80s to mid-90s) made vaguely “for posterity” but mainly because it was a fun thing to do on a rainy day during my annual month-long visits… Never planned to do anything further with them.

Yet, when I finally transcribed them in 2013-2014 to data mine them for this book, they turned out to contain not only snippets of family history she knew, embellished by a lot of piquant reminiscences about tenement living. My mother was a history minor at Hunter College and the tapes harbored a lot of insights she had about the times, quoted selectively verbatim.

Q: What surprised you most in the course of writing and researching the book? 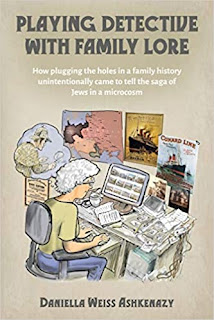 A: There were a lot of enigmas I encountered. Did my great-grandfather Jacob Reiter really “forget about his four young orphaned kids [still in Radikhiv] when he went off and married the widow Rosa Rabfogel to start a new family,” as family lore held?

What really was behind the breakdown in communication between the rich Other Schwarzers and my mother Pearl’s family—thrust into poverty after her father Michael Schwarzer’s untimely death in 1918 in the Spanish Flu epidemic?

Who was the person in whose memory I was named after he fell in the Spanish Civil War—when all I knew was his first name…and could I find this “David” 80 years after he died?

I would grapple with these and a host of other nagging questions, head-on. But first I had to decide who was writing this book. To abandon safe territory as “daughter of”—writing solely a memoir envisioned as a nostalgic and oft-humorous trip down memory lane.

Yes, Deborah, there’s a bit of that, too of course, but I had to be willing to switch caps to “journalist” if I wanted to seek real answers, including scrutinizing the veracity of cherished family lore.

As for the answers I found by connecting the dots and stitching snippets of information together in pursuit of a more coherent whole? Some confirmed or augmented the oral history. Some contested and complexified what we though we knew. And some simply blew me away.

The most memorable and emotion-loaded is, without doubt, searching for and accepting what I found was really behind the breakdown in communication with the Other Schwarzers that runs like an undercurrent throughout the family narrative.

Finding Michael Schwarzer’s half-brother (we didn’t even know his first name), tracking down the descendants of these Other Schwarzers and contacting them, and piecing together clues about these relatives hiding in census data and other sources, forced me to let go of my grandmother’s version: How she told her sister-in-law that – no, she wouldn’t become the financial burden they feared, saying, “I can take care of my own children myself!”

There was a complex family dynamic and deep psychological forces at work behind the scenes in that parting of ways.

A: As I already said, Jewish readers who have no plans to write a family history themselves are likely to find my family saga echoes and encapsulates key elements of their own heritage. So, I think the book is, in essence, a shared legacy without having to do the legwork.

But for anyone, Jewish or not, who is interested in researching their own family roots there’s another plus, techniques you won’t find in Researching Your Family History for Dummies: I share in the narrative the “roller coaster” ride in solving this or that enigma, blow by blow – with the reader in the back seat.

So Playing Detective is instructive in how archival material can be applied in a unique fashion to flesh-out a story or flush-out the truth, when others get stonewalled. It explains in the doing, how to think like a journalist… And, how to use the logic of a Sherlock Holmes, with lots of “It’s Elementary, Watson” moments.

But I think others who simply like a compelling story will find it a gripping family saga well told – that makes the reader an intimate participant in the lives of others.

When I cold called renowned scholar of American immigration Vincent Cannato to request he review the book because of its hybrid structure embedding academic input inside a family narrative, he was tardy in getting back to me.

The professor apologized weeks later – with the professional review attached—explaining in the email that he’d been “sucked into reading the whole thing.” And he isn’t even Jewish.

A: Something totally different. I’m a writer by profession but a sociologist by training, so the topic is almost a no-brainer: I’ve lived in Israel my entire adult life.

For many years, beside publishing serious content and commentary for the Hebrew and English-language press, I wrote humor columns with names like “Chelm-on-the-Med” and “Backpage News from the Front” for non-Israelis.

They were designed to balance overly conflict-driven news about Israel abroad. The vignette-style columns were based on the wildest and wackiest odd news items reported in the back pages of the Hebrew press.

I’m now adding subtext in sociological terms to the most telling incidents – in a book. The title is self-explanatory: They Did WHAT?! Only-in-Israel stories “hiding” in the Hebrew press and what they can tell us about Israeli society.

My all-time favorite vignette: About the Israeli mother who snuck into boot camp repeatedly to accompany her son every time he drew nighttime guard duty, because he was afraid of the dark.

A: The book’s structure is a tad unique. Because I’m a lifetime history buff, at the bottom of some pages I’ve “repurposed” academic footnotes…to sprinkle piquant facts and personal insights in the margins, alongside digressions and details that would encumber the flow of the main narrative. A “secondary conversation” with my readers.

This includes piquant “side excursions” – links to little-known vintage footage and eyewitness accounts online. Those so inclined can read the footnotes and follow the URLs.

For those who do, such “intermissions” are akin to visiting a virtual museum, not just reading a book. It prompted me to dub the bonus take-away “experiential reading.” But these are hardly required reading…