Corie Adjmi is the author of the story collection Life and Other Shortcomings. Her work has appeared in a variety of publications, including North American Review and Indiana Review. She lives in New York City.

Q: Over how long a period did you write the stories in Life and Other Shortcomings?

A: The stories were originally written as stand-alone pieces. After about 10 years, and a number of publications, I got the idea to link the stories because they interrelated naturally. It seemed my characters would know one another and similar themes of family, marriage, identity, and patriarchy were explored.

Elizabeth Strout’s Olive Kitteridge and Jennifer Egan’s A Visit from the Goon Squad were tremendous inspirations.

Q: The Kirkus Review of the book calls it “A compelling collection that captures the mystery and menace beneath love and family life.” What do you think of that description?

A: I was thrilled when I read my Kirkus Review because the description was so on target. It was exactly what I’d want to say about my own book. And that felt super satisfying. 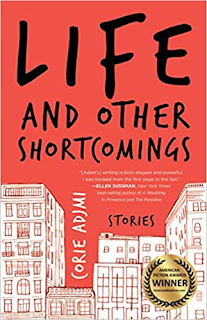 A: Life and Other Shortcomings spans four decades and explores the lives of women from differing backgrounds and ages and who have made different life choices. And yet still their struggles are remarkably similar. As things have changed a bit, especially since the #MeToo movement, they haven’t changed enough.

I hope the reader will gain understanding as patriarchy still exists. It’s inconceivable to me that in 2022, women don’t earn as much as men do for the same job. And of course, there are other inequalities.

Q: You have a new book called The Marriage Box coming out later this year. What can you say about it?

A: I’m really excited about the publication of The Marriage Box, due out in August 2022. It’s my first novel and I worked on it for a long time because, even though it’s fiction, it pulls from my real life and my experiences as an outsider living in an orthodox Syrian Jewish community. The book is sometimes disturbing but it’s mostly a lot of fun.

Zibby Owens, a NYC bookfluencer, included The Marriage Box as a 2022 must-read on Katie Couric Media and she described it as a young girl’s reluctant move from her cheerleader lifestyle in New Orleans to a yeshivah in Brooklyn.

A: These days I’m mostly preparing for the launch of The Marriage Box.

But I’m also working on another novel that, for now, is titled Always Some Beauty. It’s told from multiple points of view. Similar themes of family dysfunction and identity are explored.

The story was inspired by a New York Times article about a NYC teacher who was abusing his students for years. I’m a mother and used to be a teacher and the news hit me hard. The novel was a way for me to expel my pain, sadness, concern, and anger. Writing is good therapy.