Rob Hart is the author of the new novel The Paradox Hotel. His other books include The Warehouse, and his work has appeared in a variety of publications, including Salon and The Daily Beast. He is the former publisher of MysteriousPress.com and the class director of LitReactor. He lives in Staten Island, New York.

Q: What inspired you to write The Paradox Hotel, and how did you create your character January?

A: Paradox was based on an interactive theater experience called Sleep No More. I got this idea for a time travel hotel and it sat in the back of my head for months.

And then one day I got this image of a woman stepping off an elevator and was like—oh, that's January. She's my main character. It's hard to peg down where this stuff comes from sometimes. The ideas usually come from out in the world, where the characters just sort of show up for me when they're ready.

Q: The Publishers Weekly review of the book says, in part, " The twists keep coming without simplifying January’s mental struggles in this impressive melding of creative plotting and three-dimensional characters." What do you think of this assessment, and what did you see as the right balance between plot and character?

A: That was a hell of a review, and I was happy to get it! It's hard to strike a good balance between plot and character, and it's something I've always got in the back of my mind. You want to service both without going so far in either direction that the book feels slow, or that the characters aren't given their due. 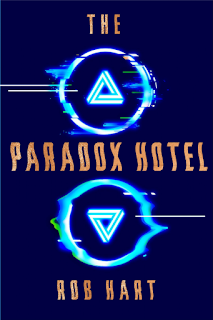 A: I can't start without knowing the ending. There will always be subtle changes between my initial vision and what ends up on the page—part of the process is in the journey—but I can never really fully grasp a story until I know where it ends.

Q: The writer Erin Morgenstern calls the novel "a masterfully crafted, wonderfully intricate novel that wraps high-concept sci-fi and locked-room mystery around an honest, emotional heart. A time-bending, genre-blending delight." Did you plan to blend genres going into the writing of the novel, and do you have a favorite genre to read?

A: I tend to skew toward crime fiction but I am a huge fan of taking weird genre stuff and mashing it all together. If you can give me a murder mystery with a sci-fi or fantasy element, I am in heaven. I'm always looking for something I haven't seen before.

A: Several things I cannot discuss! I've got a comic book I'm co-writing with a friend, and another novel I'm co-writing with the same friend. The comic is done, and the novel is on submission—so I could have news to share on them soon but I don't know!

Other than that I'm just laying the groundwork for my next novel. I've got an idea, I just don't know the ending yet. Once I do I think I'll be able to really get started on it.

A: If you're looking for some good genre-mashing check out In from the Cold on Netflix! I just finished it and really loved it. Sci-fi spy stuff.