Bryn Turnbull is the author of the new novel The Last Grand Duchess: A Novel of Olga Romanov, Imperial Russia, and Revolution. She also has written the novel The Woman Before Wallis. She lives in Toronto.

Q: Why did you decide to focus on Olga Romanov in your new novel?

A: So many accounts of the fall of the Romanovs center either on Rasputin, or on Anastasia’s many pretenders, but I wanted to learn more about who they were, not as political figures, symbols, or martyrs, but as a family.

Olga and her sisters were incredibly sheltered during their lives, in large part because their parents were trying to conceal Alexei’s condition from the general public, so when I started digging into who Olga was I expected to find someone shy and retiring.

But one anecdote about her stood out to me: when Rasputin was assassinated -- by members of her own family -- Olga acknowledged that she understood why they’d felt the need to do it. That signaled to me that she was more politically aware than I’d given her credit for, and it gave me the impetus to learn more about the passionate, driven, and impressive young woman she was.

A: The last Romanovs are the most documented family in history – there are literally thousands of resources pertaining to them – but the most valuable ones that I was able to access were translations of their diaries.

All of the Romanovs were dutiful diarists, and it’s clear that they were aware their words would be saved for posterity, but Olga’s diaries were fascinating: she writes about her exhaustion while nursing soldiers as a Red Cross Sister of Mercy, and even uses special nicknames to refer to officers she’d taken a shine to. 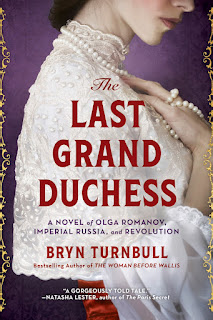 I also loved looking at the Romanovs’ family photographs: all the children were quite good amateur photographers, Maria and Anastasia especially, and their photos show just how rambunctious and loving the family was. It’s easy to forget, when looking at formal court photography and staid black and white press images, to remember that these were just people.

Q: What do you see as some of the most common perceptions and misconceptions about the Romanov family?

A: The Romanovs are often considered in black-and-white terms: they’re either portrayed as victims of the revolution or tyrants bent on oppressing their people.

The reality of the situation lies somewhere in the middle: Nicholas and Alexandra were ill equipped as rulers, and unlike other monarchies they were slow to move with the times to bring Russia into the 20th century. They weren’t wholly good, nor were they wholly evil – they were individuals who made shocking miscalculations whilst in positions of authority.

Another common misconception is that many people think of Olga, Tatiana, Maria and Anastasia as children. At 13, Alexei was certainly a child, but the daughters were between the ages of 16 and 23 when they died. To think about them as “children” risks overlooking a fundamental aspect of who they were as individuals.

Q: How would you describe the dynamic between the Romanovs and Rasputin?

A: The relationship between the Romanovs and Rasputin is one of the most intriguing aspects of the last days of Imperial Russia.

Did Rasputin manipulate the imperial couple? I think not – mostly, he stuck to telling them what they wanted to hear, and in fact most of what he preached focused on traditional Christian messages of compassion and caring for the less fortunate.

That said, it’s undeniable that his influence over the empress (and to a lesser extent, the emperor) created a PR nightmare that had devastating effects for the last Romanovs. Though by all accounts he was a trusted friend not only to Nicholas and Alexandra, but to Olga and her siblings as well.

Rasputin’s personal life was a disaster: he was a drunk and a womanizer and used his palace credentials to curry favor with Russia’s elite.

It's also undeniable that Rasputin had the ability to ease Alexei’s pain when needed – and he’d been the only one, of countless doctors and healers, who seemed to have that effect.

Looking at Rasputin from Nicholas and Alexandra’s perspective as desperate and worried parents, as well as from their perspective as rulers with only one son as a successor to the dynasty, he really was regarded as their only hope.

A: I’m working on my third novel! It’s about art theft and forgery in occupied Paris.

A: Thank you so much for inviting me! The Last Grand Duchess is out now, and you can learn more about me and my books at brynturnbull.com.