Tracy Borman is the author of the new book Crown & Sceptre: A New History of the British Monarchy, from William the Conqueror to Elizabeth II. Her other books include The Private Lives of the Tudors. She is England's joint chief curator of historic royal palaces and chief executive of the Heritage Education Trust.

Q: Why did you decide to write Crown & Sceptre?

A: The book was inspired by the Queen's forthcoming Platinum Jubilee this month. I thought it would be the perfect moment to set her long reign into context by looking back over the past 1,000 years of royal history, beginning with the Norman Conquest in 1066.

As well as exploring the fascinating stories of individual kings and queens, I wanted to look at the evolution of the monarchy and how it still survives today - which is really quite remarkable, given all the turmoil of the past millennium.

Q: Of the various monarchs you write about, are there a few that you find particularly intriguing?

A: Absolutely. There were some real surprises for me - particularly the lesser-known monarchs who I didn't expect to find that interesting but who I became completely obsessed with.

They include the likes of Henry I, youngest son of William the Conqueror, who was a curious mix of administrative genius and womaniser - he fathered more illegitimate children than any other monarch in British history (an impressive 24!).

More recently, George V was another monarch who I had overlooked, as have many people I think because he was followed by his son, Edward VIII, who famously gave up his throne for the love of Mrs. Simpson.

But there is much to admire about George V. He brought the monarchy much more in line with the people and provided an inspiring figurehead for Britain during the First World War. I also love the fact that his granddaughter, the future Elizabeth II, called him “Grandpa England.”

Q: You cover more than a thousand years of history in the book. How did you research the book, and how did you choose the most important facts about each ruler to include? 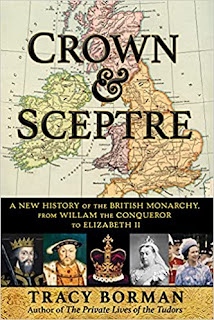 A: It was by far the greatest challenge I've faced in my career as a historian. Can you imagine that first day when I sat down at my computer and knew that 1,000 years of history lay ahead of me?

In contrast to other books I've written, I approached the research in a strictly chronological way - monarch by monarch. I began with a review of the secondary sources, then drilled down to some key original sources as they are so vital in bringing a fresh perspective, as well as dispelling myths that have arisen over the centuries.

Inevitably, given the breadth of the subject matter, I had to be selective, but I still covered a huge amount of material - so much so that I had to cut 100,000 words from the first draft of the book!

Q: What do you see looking ahead for the British monarchy?

A: There has been a lot of debate about this in recent times, particularly when there is a crisis or scandal in the royal family, such as Prince Harry and Meghan Markle's shock departure from their royal duties.

Even though the monarch no longer rules but they ceremoniously reigns, they still have an important role to play in the constitution as they can bring a wealth of experience matched by few of our politicians.

But I think one of the most crucial roles the monarchy can play in future is in philanthropy. The Queen is patron of more than 600 charities and it has been proven time and again what a difference it makes to those charities that have a royal supporter.

The monarchy can also play a key role as an advocate for good causes - as we've seen Prince Charles and Prince William do in championing environmental issues in recent times.

And I think many people both in Britain and across the world still love the pomp and pageantry that surrounds the crown - the royal weddings, jubilees, investitures, trooping the colour, etc. - so I hope that continues long into the future.

A: I've gone back to my favourite subject - the Tudors. I'm working on a book about Anne Boleyn and her daughter Elizabeth I, and how their relationship shaped not just the Tudor period but the entire history of England. It is due to be published here in the UK in November this year and hopefully in the States either at the same time or soon afterwards.

A: I'm hoping to write more fiction, following the conclusion of my King's Witch trilogy, so watch this space! I've also just finished filming two new series about the Tower and Hampton Court Palace, which I hope will make it across the Atlantic soon.