Jillian Cantor is the author of the new novel Half Life, which focuses on scientist Marie Curie.  Her other books include In Another Time. She lives in Arizona.

Q: Why did you decide to write a novel focused on Marie Curie, and how did you come up with the concept of two alternate timelines for her life?

A: I was fascinated with Marie on so many levels. She had such a brilliant mind and overcame so much to achieve the amazing things she did in her career. I was really drawn to examining how a woman in her time, born in her circumstances, was able to achieve so much, to essentially change science and the world.

But I was also really fascinated with the intense personal tragedy that seemed to be a recurring thread throughout her life, as well as the balance between her professional success and personal hardship.

The concept of two timelines didn’t come to me when I initially started writing about Marie. At first I started the book as a straight historical novel.

But I kept thinking about that man she’d almost married in Poland, how his mother had made him break it off because she thought Marie wasn’t good enough for him. That drew me into the what-if concept of the novel. What if she had actually married him? How might her life and science and the world have been irrevocably changed in ways both good and bad? 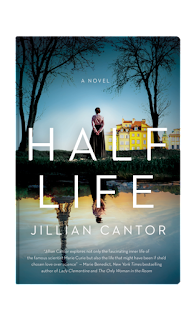 A: I read everything I could find about Marie’s life, and if you look in the author’s note I included the nonfiction books that were really helpful.

Most surprising to me initially was that Marie also had sisters who were very successful in their own right (but whom now remain relatively unknown compared to her).

And also the concept of the Flying University – that women denied education in Poland at the time formed their own secret university, the location ever changing to avoid detection, hence the “flying.” Marie and her older sister really did attend as young women in Poland, and this concept does end up playing a role in my fictional story as well.

Q: What do you see as the common ground between Marie and her alter ego Marya?

A: When I was writing I really saw them as the same person, but considered how their lives would’ve been shaped differently depending on circumstances.

Marie and Marya are both brilliant and driven to learn, and they both persevere to become groundbreaking scientists in their own ways. I felt that passion for learning, and for science, would ultimately be there no matter which course her life had taken.

A: Marie Curie was an amazing woman who overcame so much, so I hope readers will learn about her life. But also, I think the book asks larger questions about women and opportunity, about motherhood and career balance, and I hope it gives readers something to think about in that regard as well.

A: I just finished my next novel, Beautiful Little Fools, a reimagining of the world of The Great Gatsby from the women’s points of view. It takes place before, during, and after the original book and details the lives of Daisy, Jordan, Catherine, and Myrtle, as well as a detective investigating Gatsby’s death in the months after his murder.

It’s part mystery, part retelling, and part historical novel examining the lives of women at the time. It’ll be out on Jan. 18, 2022!

A: Thanks for having me, Deborah!