J.A. Jance is the author of the new novel Missing and Endangered, the latest in her Joanna Brady suspense series. Jance also writes the J.P. Beaumont series and the Ali Reynolds series. She lives in Seattle.

Q: What inspired the plot of Missing and Endangered?

A: An episode of Web of Lies on ID Discovery in which a teenager was victimized by a middle-aged online predator posing as a much younger man.

After persuading her to send him a series of nude selfies, he threatened to distribute them over the Internet. The desperate girl was close to committing suicide when she finally turned to her mother who called in the cops.

This is a kind of cyber crime that is all too common, and I hope that by telling Beth’s fictional story, I can alert parents and grandparents to the kinds of dangers waiting to ensnare their children and grandchildren.

Q: How did you initially come up with the idea for your character Joanna Brady? 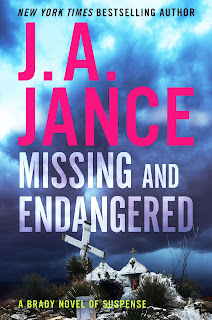 A: After writing nine Beaumonts in a row, I was tired of him and threatening to knock him off. At that point, my editor from Avon Books suggested that I create a new series that could alternate with Beau books.

The Beaumonts are written in a first person format which requires real focus. I decided that with the new series, I’d hit the easy button and use third person instead.

Beau was a middle-aged, male homicide detective. I wasn’t a male and had never worked in law enforcement. I decided writing about a female character might be easier.

With Beau, I was writing about a Seattle native when, in fact, I had lived in the city for less than two years. I decided to use a setting I knew well—southeastern Arizona, the place where I grew up.

My first husband died when my children were young, leaving me the last parent standing. I decided to leave Joanna, too, as a young widow.

As for her size? I was six feet tall when I was in seventh grade and always wondered what it would be like to be short. So I made Joanna short. That way, when I’m writing about her, I have to take her smaller build into consideration.

Q: The Publishers Weekly review of the book says, "Once again, the compassionate, intelligent Joanna balances a busy home life and a complex job with aplomb." When you're writing about her, do you plan out how much of the book will deal with her work and how much with other aspects of her life?

A: I don’t outline my books. I don’t divide the story into piles of ingredients with so much of this and so much of that. I set them to work and then observe their lives as they go about living them.

In this book, Joanna ends up spending hours working on the task of writing Christmas cards; in the meantime, one of her officers has been gravely injured, and her daughter is gradually becoming ensnared in an online romance gone terribly wrong.

A: I want them to realize that cops are first and foremost people—with families and kids and lives to live.

I also want them to realize that even the most routine on-duty assignments—delivering a protection order—have the potential of turning deadly. Some cops are bad because they are bad people, but most of the folks who sign on to become police officers do so out of a desire to help people.

A: The next Ali Reynolds book, Unfinished Business, is in final editing and due out in June. I’m working on the next Beaumont—Nothing to Lose.

A: People who enjoy my books might enjoy following my blog. It posts every Friday on my website at www.jajance.com/blog.

It’s a window on my life—like reading my autobiography in weekly installments. It’s generally about something that has occurred in my life in the course of that particular week. Since writing is my life, blogs are often about...well...writing.