Avner Landes is the author of the new novel Meiselman: The Lean Years. He lives near Tel Aviv, Israel.

Q: How did you come up with the idea for Meiselman: The Lean Years, and for your character Meiselman?

A: My parents’ next-door neighbor, Mr. Perkins, passed away, and his children put up the house for sale. My mother remarked how nice it would be if my wife and I were to buy the house and move in.

I don’t know if she was serious or just throwing it out there, but a week later, I sat down to write and out came a story about a man and his wife who live next door to his parents.

The husband always seemed to stand apart from them. He was fusty and straightlaced, always trying to get them to settle down. Why certain adults turn out rigid and severe is a question that has intrigued me for some time. 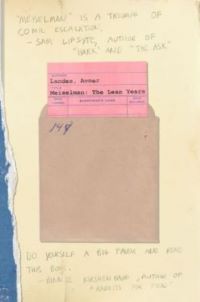 Q: Many of the reviews compare your work to that of Saul Bellow. What do you think of that comparison?

A: Flattered, of course. Undeserving. But Bellow is a major influence.

What I love about his writing is its propulsive, entertaining energy. Most of his books are funny, engaging reads. The complex theological, philosophical, and psychological examinations taking place don’t threaten to slow down the reader. But there’s so much to unpack once you get to the end.

I’m aiming to give readers a similar experience of “enjoy first, think later.”

Q: The Kirkus Review of the book calls it "A brash, bulky yarn about one man’s determination to get his life in order." What do you think of that description?

A: Hearing interpretations of the book from readers and reviewers has been the most thrilling part of the publishing journey. People have pointed out connections and observations that never crossed my mind.

I love the idea of describing Meiselman and his story as “bulky.” He lives a “bulky” life. The countless obsessions over what he eats and wears, the tones his wife and colleagues take when speaking with him, perceived slights, etc., weigh him down to a point that he often finds himself in a paralytic state, unsure of what to say or do next.

Such obsessive thoughts lead to a life of disorder, something he figures out early on in the story.

A: Meiselman is, no doubt, an outrageous character. He is more interesting than likable, although I’m confident readers will be rooting for him by the book’s end.

Yet, I hope readers will see that they aren’t much different from Meiselman, who, at the outset, is accustomed, even comfortable, fixating on those interactions that reinforce his view of himself as eternal victim.

Not to sound too self-helpy, but Meiselman discovers that “know thyself” is a powerful first step to undermining that perspective and leading a happier life.

A: I’m working on another novel. One would think it would be easier the second time around, but it’s been much more difficult for me. There’s the fear of repeating oneself and the desire to attempt something new and interesting.

Writing the first draft has been particularly painful because I’m always comparing it to the polished, finished version of my novel, forgetting the hundreds of drafts it took to get to that point.

A: Here’s something fun: I work as a ghostwriter, although we don’t call it that because it implies that the actual author isn’t doing the writing.

The job exposes one to an array of interesting people who do interesting jobs or have interesting theories about our world. It’s forced me to question many assumptions I’ve had about certain types of jobs and people and that’s a good thing.