Dana L. Church is the author of The Beekeepers: How Humans Changed the World of Bumble Bees, a new middle grade book for kids. She is based in Waterloo, Ontario.

Q: What initially intrigued you about bees, and why did you decide to write this book?

A: One summer when I was in university, I got a job as a research assistant for a professor. She studied bumble bees and kept some in her lab. It was my job to look after the bees and run some experiments with them.

I was terrified. I thought, “What was I thinking, applying for this job?” But I was desperate for summer employment. I thought I would get stung every day.

But I quickly learned that bumble bees will only sting you if they feel threatened; they will let you watch them for as long as you want if you don’t get too close.

Once I started running some experiments, I realized how quickly they can learn and they can learn some pretty complex stuff for an insect with such a small brain.

And watching their activity in the nest was fascinating. I saw “undertaker” bees carrying dead bees out of the nest, and I saw new bees hatch, chewing their way out of their wax cocoon, emerging with silky, gray fur. I became so intrigued and attached to bumble bees that I ended up studying them for my Ph.D.! And I was never stung. 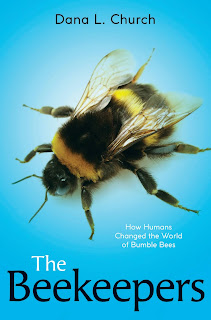 As for the book, I always wanted to write my own book ever since I was a little girl. People kept telling me I should write a book about bees, so I did!

But originally the book featured a fictional character whose mom was a professor and had a bumble bee lab. My editor at Scholastic, Lisa Sandell, suggested, “Why don’t you write a book about the relationship between humans and bees?”

Q: What do you think are some of the most common perceptions and misconceptions about bees?

A: I think it is quite common for people to think of wasps, honey bees, and bumble bees as all the same animal: bees. I was guilty of this, too. But they are all very, very different insects.

People also expect bees to sting. Bees will only sting if threatened. So if you swat at them, sure, they might sting. But if you leave them alone, they will leave you alone, too. Like I mentioned, bees will let you watch them if you don’t get too close. (They don’t like us breathing on them. The blasts of carbon dioxide from our breath is irritating.)

A more recent misconception is that people think if they set up honey bee hives in their backyard they are “saving the bees.” Honeybees can spread disease and take resources away from wild bees.

It is much, much more likely that some species of wild bumble bees will go extinct well before honey bees, so, as I talk about in my book, instead of setting up a honey bee hive, it is much more helpful to do things to support wild bees. This includes planting nectar-rich wildflowers wherever you can and avoid using pesticides.

Q: The book's subtitle is "How Humans Changed the World of Bumble Bees." What are some of the most important changes?

A: Some of the main changes are mass producing some species of bumble bees for pollination services, taking over huge swathes of habitat, and using deadly pesticides, especially neonicotinoids. Unfortunately, these have all been very negative changes for bumble bees. But as I write about, there is much we can do to try to turn things around.

Q: In the Author's Note, you write, "One thing I hope I didn't do was make you feel discouraged about the future." What do you hope readers take away from the book, and what do you see looking forward for bees and for their relationship with humans?

A: After reading my book, I hope readers feel a new sense of respect and awe for the natural world. Bumble bees are so small but they can do so much, they are so impressive, and they are such an important part of the ecosystem.

I hope readers realize that they themselves, too, are part of the ecosystem, and that they can make positive change even with small steps like planting a garden of native, nectar-rich wildflowers.

Looking forward, I think it will certainly be an uphill battle for some of the more threatened species of wild bumble bees to survive. We humans continue to take over habitat and use deadly chemicals for our crops and lawns.

However, I am also very hopeful, because there is a growing awareness of our impact on the environment and a growing awareness and respect for bees. This is seen in organizations such as Bee Cities that have been popping up all over the U.S. and Canada. This is very encouraging.

A: Right now, I’m having lots of fun researching and writing my next book about the lesser-known aspects of monarch butterflies, such as the rivalry between some scientists, barfing blue jays, and how it is that monarchs in eastern North America manage to migrate thousands of miles each year to Mexico. This book, also with Scholastic Focus, will be released in the fall of 2023.

A: Check out my #BeeFactFriday on Twitter! You can find me at @DanaLChurch.

Thank you so much for featuring me and my book, Deborah! It was such a pleasure.