Marcia Butler is the author of the new novel Oslo, Maine. Her other books include the novel Pickle's Progress. A former professional oboist, she lives in Santa Fe, New Mexico.

Q: How did you come up with the idea for Oslo, Maine, and for your cast of characters?

A: Oslo, Maine inspects the strengths and limitations of average yet extraordinary people as they reckon with their collective failure around a 12-year-old boy’s accident which has caused him to lose his memory. Throughout, a moose (who has a point of view) observes from a distance.

The inspiration came from the many summers I performed at a music festival in central Maine. (In a former life I was a professional oboist.)

The woman who ran the festival told me about a frightening experience when late one night she crashed into a moose. Though the moose was, thank goodness, killed instantly she was able to drive away.

Once home she found shards of windshield glass in her underwear, and even a sliver between her contact lens and eyeball! Then, when she and her husband went back the next morning to deal with the carcass, the moose was mysteriously gone.

I wasn’t yet an author, but the odd details of this story stayed with me and eventually landed in my novel, though in very a different version.

The woman who housed me during those summers was a wealthy transplant from New York City. She’d fill me in on all the happenings in town—deaths, divorces, births, disagreements, good fortune, foreclosures. Some of those people, quite colorful and compelling, became archetypes for my characters. 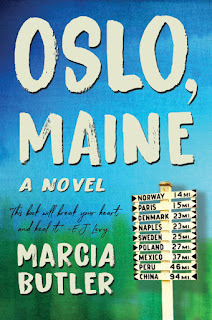 Q: Your previous novel, Pickle's Progress, took place in New York City, while this book takes place in a small town in Maine. Can you say more about why you chose this setting?

A: I was eager to write from a location that was completely different from New York City where I’ve lived most of my adult life.

I’d fallen in love with Maine since my years performing and still try to visit whenever I can. It is a truly unique state with an immensely diverse topography. The people are independent thinkers and friendly to a fault.

Additionally, my very first sighting of a moose grew into what I can only describe as an obsession. All of this seemed like fertile territory for my second novel.

A: I don’t write from a plot outline or any preconceived notion of what the novel will ultimately become. I begin with one or two inciting incidents that I think might work as turning points for the story. Then I write toward those incidents and away from them.

The first draft is intentionally vague so that during multiple edits I can pivot quickly as my characters develop. Occasionally they surprise me and say things I have no control over. This is immensely exciting—to walk alongside these people and discover who they actually are.

The process reminds me of playing oboe in a chamber music concert when something unexpected happens which is different from what was agreed to in rehearsals. You go with it because it is a spontaneous expression of creativity. If I worked with an outline, I fear I might not be as open to all the strange things that happen during my writing process.

Q: What role do you see the moose playing in the novel?

A: My moose, and what happens to her, is the linchpin of Oslo, Maine because though she remains a background character, almost all action flows from this animal’s presence.

Specific to her point-of-view, I needed to convey what she observed in a manner that was both understood by the reader and still remained animal-like. I made decisions along the way that straddled those imperatives, achieving a believable anthropomorphism.

She also, at times, contributes dramatic irony in that through her point-of-view the reader is clued into events that the characters have no knowledge of.

My moose is probably the most sympathetic character in the book because she operates without guile or agenda. A thing to behold and something humans might aspire to but will never achieve.

A: I am tunneling my way through the first draft of my third novel which is about a young woman of Irish extraction, her persnickety boss from Minsk, Belarus, a washed-up British rock and roller, and a plumber.

As of now, it begins in Boston and ends up in the high desert of New Mexico. But I’ll have to see what my characters ultimately want to do. They usually have final say.

A: Did you know? A moose survives during the winter by consuming 70 pounds of leafless twigs a day. They can swim as fast as 6 mph, as far as 12 miles, and dive as deep as 20 feet. Their main predators are a pack of wolves and humans with a gun or a car.

Moose are miracles of survival. If you’re lucky enough to see one, it may very well change your life!