W.S. Winslow is the author of the new novel The Northern Reach. Her work has appeared in Yemassee Journal and Bird's Thumb. She is based in Maine.

Q: How did you come up with the idea for The Northern Reach?

A: I wanted to tell the story of a place and its people over several generations, but not in the form of a traditional historical novel.

Initially I thought the book would be a linked story collection, but as I went along, characters from one story would pop up in another. Thematic parallels emerged, motifs repeated, and I saw links among various stories and points of view.

Once I realized it worked best as a novel-in-stories, organized around this small town and a few of the families who lived there, I started to approach it as a sort of literary patchwork quilt with white space between the “squares” that would let the reader fill in the blanks.

In terms of inspiration, I drew upon stories I’d heard about my own family, many going back hundreds of years in Maine and New England. Stories of my friends’ families also gave me ideas and context.

I added these to nuggets of personal folklore, bits of language, and my own experiences to build the narrative. 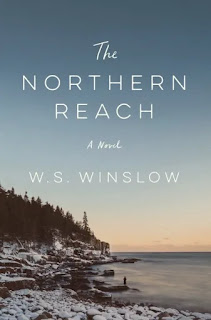 Q: Author Sarah Blake compared the book to Winesburg, Ohio and Olive Kitteridge. What do you think of those comparisons?

A: I love those books, and I can see many similarities. Like mine, both are novels-in-stories and both are character-driven and place-specific.

They differ from each other in that Olive Kitteridge zooms in on one very compelling, gorgeously complex character (hence the title), while Winesburg, Ohio tells the broader story of a place through its characters, again, as the title indicates.

My book falls somewhere in between the two. What I’m interested in is the intersection of people, culture and place.

What kind of culture evolves when a bunch of tough, unyielding Puritans settle in a harsh, demanding, very insular environment like Maine, and what happens to their descendants after a couple hundred years there?

Over time and in such a place, what kind of world view do people develop, how do they see themselves, and what happens when others, like French Catholics from Canada or Irish immigrants, arrive “from away”?

These, it seems to me, are questions about the past that resonate in the present moment.

So although my book is kindred to both Strout’s and Anderson’s and comes out of the same tradition, I think it differs in terms of focus, scope and perspective, though obviously I’d be thrilled to be in such company.

A: The initial title was much longer, and my editor felt it didn’t work very well, so we noodled on it for a long time and came up with “The Northern Reach” which is the name of the strait that runs along the east side of the fictional town of Wellbridge, Maine.

The title works on a couple of levels: it’s both locative and symbolic. The townspeople live with the reach in an intimate way. They look at it every day, it gives – food and jobs – but it takes, too. It’s at once the life blood of the town and a constantly menacing presence.

Symbolically, the idea of reaching resonates throughout the text. People reach for each other, try to connect. They reach for different lives, better lives, other ways of being, faith. Some succeed, some don’t.

Q: The novel takes place in a small town in Maine. Can you say more about the importance of setting to you in your writing?

A: I often think about Louise Erdrich’s observation: “Here I am, where I ought to be. A writer must have a place where he or she feels this, a place to love and be irritated with.” If you have strong feelings about a place, especially conflicted ones, the stories are already there.

It’s funny, I was born and raised in Maine (although I lived most of my life “away”), but it wasn’t until I started writing about my home state that I began to think about it in a deeper, more nuanced way, and to really consider what it means to me, how it feels to be not only from this place but of this place.

Without the setting, there’d be no book. So the setting is central to the story as a place, but it’s also a character, a living presence, in my work as in my life.

A: After I finished The Northern Reach I started a bunch of things, but I couldn’t get going on any of them. Eventually I realized I wasn’t done with this world, this town of Wellbridge, Maine, these people.

There were so many back stories to tell and so many peripheral characters who deserved more time, that I decided to take up the story of Myra Moody, the ghost mother in Trinity.

It took a while to find my way in, but I’ve more or less settled on a call and response form, testimonies mixed with narrative.

One day, I’d love to write a murder mystery or a humor book, but for now, I’m staying in Wellbridge, with some old friends and a couple of new ones.

A: Though most of this book takes place in the past, that bygone world still feels all too familiar in its social stratification, bigotry, poverty, intolerance and injustice, its darkness.

Still we reach out, but far too often our hands come back empty; that’s the tragedy of being human. It’s sad that as a country we haven’t made more progress, but then again, it seems to me we have made some. And I hope that means we can make more.

Even in a hard, unfair world, humankind endures, and even without a happy ending we can laugh occasionally, love one another, forgive one another, and get on with life. I think there’s hope in that, and my sincerest wish is that that’s what readers will take away.